After weeks of arduous renegotiations in an attempt to upend the 1994 North American Free Trade Agreement (NAFTA), which bound together the economies of the United States, Mexico and Canada, President Trump on Monday declared victory and said he had a new trade agreement on the table with Mexico. 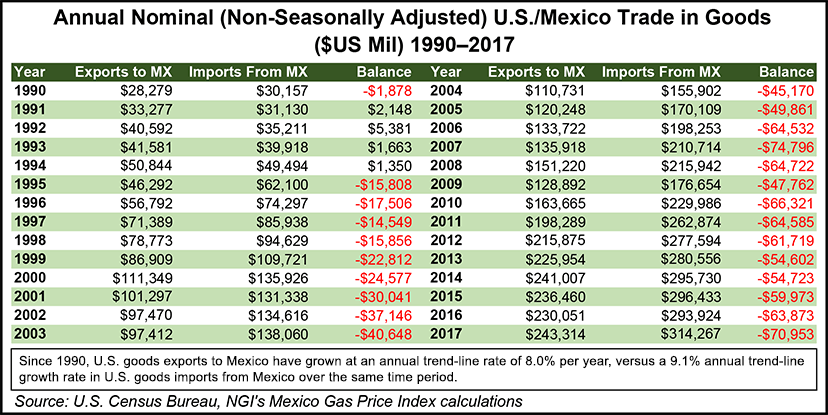 However, the deal for the United States-Mexico Trade Agreement, as Trump called it, remains tentative, and discarding the original NAFTA would require Canada to take part in any attempt to scuttle it. The U.S. president has previously described NAFTA as the worst trade agreement in history.

The tentative 16-year trade deal with Mexico remains open to Canada joining, although Canada has been absent in recent weeks from the trade talks. U.S. Trade Representative Robert E. Lighthizer told reporters on Monday that every effort would be made to include Canada, even if it takes longer than the deadline. Mexico also has made clear it wants Canada included in the agreement.

Trump indicated he thinks the deal with Mexico nullifies NAFTA. However, Lighthizer indicated no decision had been made regarding the name change or the proposed pact.

Lighthizer said the White House would send to the U.S. Congress a letter by Friday to formally begin the 90-day process to revise NAFTA. Details were vague, however, about what the letter would say.

The initial agreement announced Monday between the United States and Mexico, if completed, has an option to be revised in six years and potentially extended for another 16 years.

White House and Mexico officials also did not reach an agreement about the steel and aluminum tariffs imposed by Trump several months ago. Lighthizer said the tariffs were an issue still to be resolved. The White House said the agreement with Mexico, focused on auto manufacturing, would make it more difficult for foreign countries to ship cheap products via Mexico and then into the United States.

Canada, which for now is not part of the proposed agreement, had been taking a prolonged raincheck, of several weeks, from the renegotiation talks.

With Mexican and U.S. officials attending at the White House to mark the conclusion of the talks, Trump on Monday talked by telephone with his Mexican counterpart, President Enrique Pena Nieto, in front of a pool of journalists.

Pena Nieto earlier tweeted that he had spoken with Canadian Prime Minister Justin Trudeau, and the two want to include Canada in the new accord. On the phone call with Trump, Pena Nieto made that clear. However, Trump only said: “We’ll see if Canada can be part.”

Canadian Foreign Minister Chrystia Freeland was in Europe Sunday, but she said she could be in Washington, DC, as needed. It appeared Monday that time was not on Canada’s side for inclusion.

“We will only sign a new NAFTA that is good for Canada and good for the middle class,” said Freeland’s spokesperson. “Canada’s signature is required.”

The end of this week is the deadline ahead of the 90 days for approval by the U.S. Congress for signature of the trilateral accord.

Utah Republican Sen. Orrin G. Hatch, chairman of the finance committee and a Trump ally, said improving NAFTA would help U.S. businesses, manufacturers and farmers, but a bilateral deal with Mexico only is not the answer. “To achieve that goal, a final agreement should include Canada,” he said.

In response to the proposed agreement, the Texas Independent Producers & Royalty Owners Association (TIPRO) said it was in support of the bilateral accord. “TIPRO supports a modernized NAFTA that will rebalance the trade relationship between the United States and Mexico, building on the success of the previous program,” said President Ed Longanecker. “Over the years, NAFTA has enabled energy integration amongst the United States, Mexico and Canada that has led to the creation of many new opportunities to improve trade relations across North America.

“Expanding trade opportunities in North America supports continued growth in production of domestic oil and natural gas and expands both economic and geopolitical benefits for our country as well as for Mexico. We look forward to learning more specifics of the new trade arrangement reached between the United States and Mexico as it will relate to the energy sector, particularly given the large volume of oil and gas resources supplied daily to Mexico by our country.”

TIPRO plans to watch whether under the new pact Trump would “uphold the values of reciprocal trade without the barriers of tariffs or quotas, including lifting levies placed against imported steel and aluminum products from Mexico,” Longanecker said. “TIPRO has been a vocal advocate calling for the discontinuation of such tariffs, though it must be done in a way that will not otherwise impede critical domestic oil and gas production.”

Other industry groups want an agreement between all three countries.

“While we’re still awaiting the full details of this preliminary deal with Mexico, it is critical that any modernized NAFTA continue to include all three North American partners,” said National Foreign Trade Council President Rufus Yerxa. His group represents exporters. “NAFTA has made North America an economic powerhouse, and the only way we can compete for global markets with Asian and European producers is to maintain and strengthen the entire North American production base.”

During the last week, the talks between the United States and Mexico had seemed particularly fraught by the presence of two Mexican teams of negotiators: one led by Foreign Minister Luis Videgaray and Trade Minister Ildefonso Guajardo, and the other led by Jesus Seade, the trade representative of President-elect Andres Manuel Lopez Obrador.

Seade, who has a doctorate in economics from the University of Oxford, has considerable experience in trade negotiations from the time when he was Mexican ambassador to the Uruguay Round of the General Agreement on Trade and Tariffs.

The message from his chief was that amendments had to be made in what is known as the “sunset clause,” which proposed a firm fixed term for successive renegotiations of the agreement.

The other message was that the other plea was to remove the wording in the energy chapter that would oblige the Mexican government to continue the reform process launched in 2013 by Pena Nieto without any backward step.

On both issues, Seade persuaded his fellow Mexican negotiators, then those of the United States.

The sunset clause now amounts to a six-year appraisal without the threat of cancellation.

The energy issue was potentially much more controversial. Members of LÃ³pez Obrador’s future government contains many — including the president-elect himself — who were opposed to the energy reform.

What Seade apparently argued was that the Mexican Constitution does not allow a treaty (and Mexican law regards the accord as a treaty rather than as a simple agreement) to bind the government over future eventualities.

Videgaray and Guajardo accepted both arguments. “We’re one and the same team,” Guajardo said of the representatives of the outgoing and incoming administrations.