Demand for new onshore rigs in the U.S. Lower 48, combined with a big rebound in hydraulic fracturing (fracking) services, lifted Nabors Industries Ltd. to better-than-expected improvement in all of the U.S. operations during the second quarter. 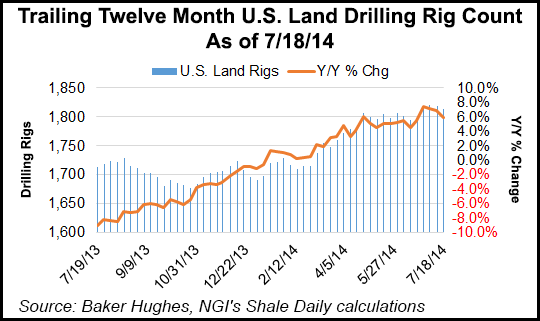 CEO Tony Petrollo and his management team discussed the results during a conference call on Wednesday.

One year ago Petrello had called the North American drilling market “uninspiring” (see Shale Daily, July 25, 2013). He could not say the same on Wednesday. The uptick in the latest quarter is all about rig demand, he said, specifically high-tech, alternating current (AC) rigs and silicon-controlled rectifiers with walking systems.

“Right now every piece of our horsepower is being utilized, with the exception of one crew that is being retrofitted for dual fuel and the other crew is being refurbished,” Petrello said. Nineteen fracking crews are working in the U.S. onshore, which is to go to 22 in the second half of the year. “The calendar is full throughout the year…”

The current active rig count in the Lower 48 states is at 203, higher than it was at the end of the second quarter. “I think there will be a steady progression in the next two quarters,” Petrello said.

Average active U.S. rigs in 2Q2014 stood at 199, 6% higher than in the first three months of this year. Utilization was at 94% between April and June, and utilization for pad-capable AC rigs at 96%.

Fracking stage counts climbed substantially from a year ago, with the stage count up 45%. An improvement in U.S. drilling results was attributed to increases in utilization and pricing in the Lower 48 operations. The total number of new Pace-X rig commitments is at 34, and covers all newbuilds scheduled to be deployed into early next year. AC rig utilization remains high at 95% with only one rig on standby revenue versus 11 rigs at the end of 2013.

During the quarter the company combined multiple rig engineering organizations into a single, streamlined group, which should lead to a lower capital cost for new rigs, quicker time to market for new rig designs, and more component commonality across the rig types.

Nabors also obtained long-term contracts for another eight Pace-X in the U.S. market.

“We deployed the first X rig in early 2013 and field performance has been outstanding,” said Petrello. “We rolled out four X rigs in the second quarter. We now have 25 in the field, working in all major shale plays in the U.S. Our 26th X rig is scheduled to go out this week. Our plans call for eight additional X-rig deployments during 2014, all of which already have contracts.”

The market for the higher performance AC rigs is continuing to improve, said the CEO. “Industry utilization for such rigs including our fleet is quite high. As operators realized the value of our advance rigs to deliver improved total well cost, we are realizing broad rate increases across major basins. We are also seeing substantial improvement in leading edge rates for AC rigs — and our legacy fleet, although utilization of our legacy rigs remains challenged.”

Still trending are high-density drilling pads. “We think this trend is partially responsible for the strong customer interest in our X rig,” said Petrello. The X rig is able to drill large well arrays on a single pad.

The completions business has improved substantially from a year ago, and Nabors management is optimistic for continued improvement through the rest of the year. The company began implementing price increases in most basins during the second quarter.

“The challenge in this business currently is the availability of propane,” said Petrello. “We have taken steps to improve our supplies of propane, which should improve our utilization further. For our production services business, we expect rig and trucking hours to increase seasonally. While the business remains solid, so far this year we have seen less acceleration than we anticipated. For the rest of the year, we would not expect better performance than normal seasonality would indicate.”

“During the second quarter, contracts on 34 of our rigs expired, 14 of those received extensions for new terms averaging 7.3 months at rates that are up meaningfully,” Restrepo said.

“For the third quarter, we have 26 rig contracts expiring. As we look across basins, demand in pricing is currently strongest in the Permian Basin followed by the Eagle Ford…Daily drilling margin for rig for the Lower 48 was $10,031, an improvement of 6%. Virtually all of rig categories in the Lower 48 delivered increases in drilling margins as compared to the first quarter.”

At the end of June, 117 rigs were working under term contracts and 82 were on the spot market.

Nabors owns and operates about 496 land drilling rigs throughout the world and 544 land workover and well servicing rigs in North America. In addition, Nabors is one of the largest providers of fracking, cementing, nitrogen and acid pressure pumping services with 800,000 hp currently in service.

PTEN’s average rig count in the United States increased by eight rigs in 2Q2014 to 201 from 193 rigs in the first three months of this year.

“The growth in U.S. rig count more than offset the annual seasonal decline in Canada to three rigs from 10 rigs in the first quarter,” Hendricks said. “Activity in Canada has begun to ramp up, and our rig count in the United States is continuing to increase. For the month of July, we expect to average 207 rigs operating in the United States and nine rigs in Canada.”