Requests for oil and natural gas drilling permits continued to strengthen in March, when U.S. land permits totaled 5,586, up 34% from February and 42% year/year, according to data by Evercore ISI. 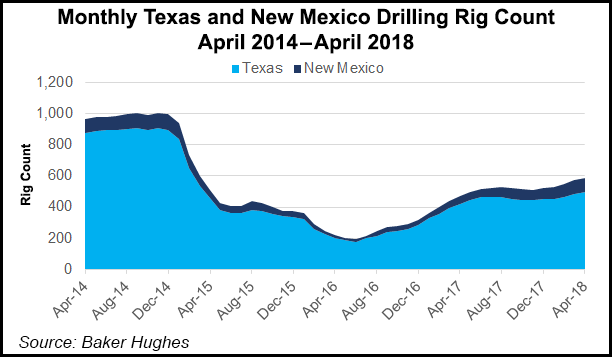 There are some weak spots, with Utah permitting falling 32% from February, while Louisiana was off 2%, but the losses were more than than offset by month/month gains in New Mexico (29%) and Wyoming (25%).

“Texas permitting grew 34% on the back of flat growth a month before; with over half of the working U.S. oil rigs, Texas continues to be the single-most important state in terms of evaluating the magnitude and direction of U.S. permitting trends,” said Evercore’s James West.

It was the second straight month for permitting to improve sequentially and from a year earlier, with the monthly total in march above 5,000 for the first time since late 2014.

A 25% uptick in Wyoming permitting drove the recent week/week improvement, which implies an April total sharply above 4,000.

“From a momentum standpoint, year/year improvement in the state-level four-week trailing average is most robust in the Rockies (Colorado/Wyoming) and the Permian (New Mexico/Texas), where the Rockies permitting cadence has tripled and the Permian pace has grown nearly 50%,” West said.

Oklahoma and Bakken Shale permitting also are solidly higher, while even conventional activity appears to be on the mend, at least in terms of permitting, for California.

With nearly every budget finalized for the year and assuming commodity prices below the $65-70/bbl band, “we see ample upside to drilling programs as evidenced by the sheer outperformance of permits” versus estimates and capital spending assumptions.

The 41% growth in domestic permitting for fiscal 2018 “continues to vastly outpace our projected 15% increase in spending growth (and is anticipated to fall just 15% shy of the 2014 peak),” West said.

The U.S. rig count to date has surprised to the upside, with the count last Friday eclipsing the 1,000 level. The March total count and a multi-year high average over four weeks “bode well for continued rig count strength,” he said.

“The inflationary cycle is in full swing,” West said, and the oilfield services (OFS) sector “is poised to capture this upside as seasonal and weather related bottlenecks subside.”

The onshore metamorphosis to manufacturing mode is showing in conventional permit trends too.

However, the rig count is driving most of the macro models in Evercore’s North American OFS coverage, “and ”conventional’ wisdom would suggest that we are still a far cry from the 2014 peak of 1,864 U.S. rigs.”

Still, there’s upside on the OFS front, as sold-out completions lines “continue to command similar pricing power to that of the previous cycle peak.”

The unconventional/conventional permit ratio “has nearly doubled from the 6.0-times level in 2014 to nearly 12.0-times today,” West noted. “Conventional plays, including California, have been relatively absent from the permit/activity recovery thus far, despite the lower capital barriers,” as vertical conventional wells often cost less than $1 million in total drilling and completion costs.

“Conventional wells tend to be more risky from a geological perspective, and the push for scale-driven value creation in shale lends itself well to the ”manufacturing’ paradigm that would preclude conventional projects of size.”