With oil and natural gas prices rising and rigs coming off the stacks, the U.S. energy sector is poised for a comeback of sorts in 2017, but operators still face headwinds that may hinder growth. 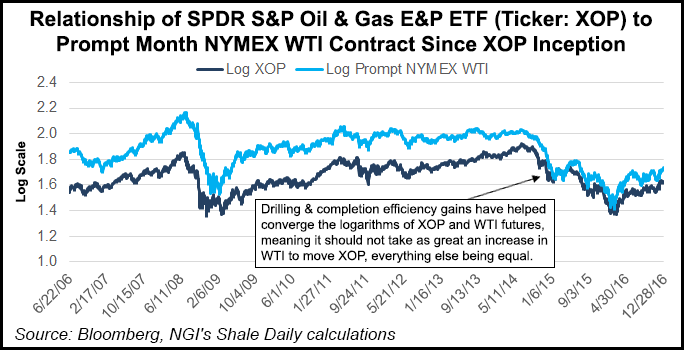 Fitch Ratings is predicting a sharp decline in bankruptcies and defaults for the domestic energy operators, buoyed in part by protection from higher commodity prices.

“After driving the 2016 rate, U.S. energy defaults will taper off next year, with a forecast of just 3% compared with the current 18.8% November trailing 12-month rate,” according to Fitch Ratings. “We expect the U.S. high-yield default rate to finish 2017 at roughly 3%.”

Haynes and Boone LLC, in a year-end report, said the number of bankruptcy filings in the oil and gas industry declined to 20 in 4Q2016 (through Dec. 14) from 29 in 3Q2016. Onshore explorers Memorial Production Partners LP and Bonanza Creek Energy Inc. have since announced they each would restructure under bankruptcy protection plans, but they expect to file in 2017.

“The impact of the distress faced by the industry cannot be understated,” Haynes and Boone’s energy and bankruptcy practice lawyers said. The firm represented more than 35% of the 114 bankruptcy cases filed by E&P companies in 2015 and 2016. All together, the Chapter 7, Chapter 11, Chapter 15 and Canadian bankruptcy cases from the start of 2015 through mid-December impacted at least 232 E&P companies, which together represent more than $96 billion in cumulative secured and unsecured debt. Most of the E&P bankruptcies were in Texas, totaling almost $32.47 billion, followed by Delaware at $18.65 million and New York at $18.59 billion.

“While the industry is in recovery mode, we think much of this has already been priced into most E&P stocks, and see potential structural headwinds for the group as we enter 2017,” Tameron wrote. Rising activity is expected to drive service cost inflation and reduce efficiency gains, while there remain “uncertain long-term price expectations.”

Add to that the “dubious” compliance track record of the members of the Organization of the Petroleum Exporting Countries (OPEC), which in mid-December reached agreement to stabilize — for six months — oil output. “Buoyed by lower cost structures, higher prices, the need to grow production and just more optimism post-OPEC, we expect operators to step on the pedal as we enter 2017,” Tameron said.

Capital expenditures for the companies under coverage by Wells Fargo are expected to increase 46% from 2016. From the first half of 2016 to the second half of 2018, analysts are forecasting a 90% increase in capital budgets.

OFS/operating costs savings touted by companies since the downturn began in late 2014 have begun to dry up, however. Look for higher completion costs in the first half of 2017, along with rising lease operating expenses and escalating general/administrative costs as staffing picks up, according to Wells Fargo.

“While the expected ramp in volume will partially offset, we model the net impact of rising per unit costs in 2017 and 2018 across our universe. We see these inefficiencies resulting in lower production for every capital dollar spent and downward pressure on margins (crude price impact excluded).”

Significant gains have been made toward “sustainable” efficiencies in drilling practices, but step changes from here forward are unlikely, Tameron said. As activity ramps up and crews are put back to work, inefficiencies likely will creep back into the system.

“Ranging from sand, to labor, to trucking, to pressure pumping, investors and operators alike are focused on the topic,” the firm said in a note to clients Friday. The first three months of 2017 “could create a headwind for E&Ps as oil prices are not yet high enough to see material revisions to growth expectations…”

Based on the “corporate conversations over the last month, we believe operators will likely need to true up capital costs using a high single-digit or low double-digit inflation range that steadily increases toward 20% over the next year,” TPH said. “This should continue to create a positive tailwind for OFS stocks with favorite onshore names…”

Long-term oil and gas price expectations also are uncertain. With OPEC announcing members would reduce output, “we see an emboldened ramp in U.S. volumes increasing the likelihood of a banded commodity environment in 2017-plus,” Tameron said. Besides, Wells Fargo’s covered E&Ps are trading at a level that implies a $61/bbl crude oil price, ahead of long-term expectations and consensus, “making it hard to see upside potential from a macro perspective.”

The Federal Reserve Bank of Dallas, in a report issued Thursday, said that while the OPEC reductions “look impressive on paper, implementation is far from assured. The actual effect on the global supply-and-demand balance is likely to be muted.” Since the reductions are only in place for six months, the effect on the last half of 2017 would depend on whether the cartel agrees to extend the cuts at the scheduled May meeting. Data to be issued by OPEC in mid-February “will reveal whether countries began complying with the cuts in January.”

How U.S. output may be impacted by the OPEC agreement may be muted in the near term, said the Fed’s Rachel Brasier and Martin Stuermer.

“Industry contacts view the agreement skeptically, which may deter firms from drilling substantially more than what is already planned,” they said. “The U.S. oil rig count has been trending higher since mid-2016. If OPEC fully implements its cuts, this will most likely lead to an uptick in U.S. drilling activity and begin to push up U.S. crude output after six to nine months, according to industry contacts.”

In any case, the upside for U.S. E&P companies “is simply limited, in our view,” Tameron said. In Wells Fargo’s review of previous cycles, analysts saw “little evidence” that domestic explorers would outperform “in the later phases of a prolonged recovery.”

Morningstar analyst Joe Gemino said Thursday OPEC’s production cuts would be significant; even after factoring in the “inevitable U.S. shale response to higher crude prices,” the reductions would create a supply deficit in 2017. Consequently, Morningstar raised its 2017 WTI price to $60/bbl from $50.

However, the “modest recovery in oil prices will encourage U.S. shale producers to further ramp activity so that they eventually replace almost all ‘removed’ OPEC barrels with their own,” Geminio said. “The industry is awash in low-cost oil, and temporary OPEC cuts cannot alter this reality. Our long-term oil price assumption of $55/bbl WTI is unchanged.”

Curtailing oil-directed drilling activity also may reduce U.S. natural gas production growth in the near-term, but a “wealth of low-cost inventory in areas like the Marcellus and Utica ultimately points to continued growth through the end of this decade and beyond,” the Morningstar analyst said.

“Based on a more optimistic outlook for low-cost production — primarily as a result of slowing declines in associated gas volumes, as well as improved productivity and resource potential from the Marcellus and Utica — we are reiterating our long-term marginal cost for U.S. natural gas of $3/Mcf. We see more and more evidence that U.S. shale producers can survive (and in a few cases thrive) at much lower prices than we previously assumed.”