The Energy Information Administration (EIA) on Wednesday said U.S. oil refinery input for the week ending June 26 averaged 14 million b/d, about 193,000 b/d higher than in the previous week, but the recent spike in Covid-19 cases nationwide may drive consumers back indoors, according to experts. 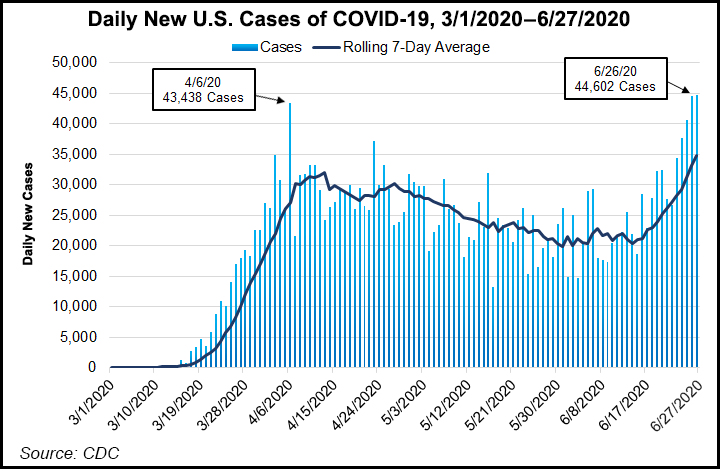 U.S. refineries operated at 75.5% of their capacity last week, EIA said, with gasoline production climbing to an average of 8.9 million b/d. Imports, meanwhile, fell, averaging 6.0 million b/d, down by 0.6 million from the previous week.

Plenty of recent headlines note that several states, including parts of California, Florida and Texas, are shutting down bars and some venues, while other states have paused their reopening process. However, “pausing is not quite the same as reversing/undoing prior steps,” said Raymond James & Associates Inc. analysts. Most of the state actions have been “narrowly targeted,” and “we will surely see more of these kinds of ‘whack-a-mole’ measures.”

The upward trend in positive Covid-19 cases is no one’s friend, but it’s still unclear how much energy demand may be impacted this summer, with nationwide Fourth of July celebrations canceled or curtailed.

Raymond James analyst Tavis C. McCourt and his colleagues noted that a broad reopening has been underway worldwide at a pace “notably faster than most would have envisioned two months ago.”

However, “the main concern is not the near-term prospect of additional reversals over the next few months (that is a certainty), but rather the likelihood of a serious Covid second wave this coming fall/winter (in the Northern Hemisphere) and the uncertainty as to how countries choose to deal with that potential.”

As of late June, Raymond James estimated that 83% of the formerly locked-down global population in 80 countries had reopened, up from around 6% in mid-May.

“Although economic re-openings have been substantial, the economic acceleration from these re-openings can’t last forever,” McCourt said. “What we’ve likely seen in the second quarter is the pent-up demand from these gains in May/June (financed by record fiscal support), but ultimately a flattening of the economic curve from something that looks like a ‘V initially.”

Still, with the uptick in activity since late May, global traffic trends appeared to plateau in June, and there is “some evidence that restaurant trends have stopped improving in cities hit by substantial virus spread in the U.S…”

In the United States, the trend appears to be “flattening after a strong improvement in April,” the Raymond James analysts said. And in China, year/year growth in domestic airline seats “has flat-lined the last several weeks after a strong recovery in March-May.”

With oil and gas firms reducing activity and cutting staff, it’s no surprise that global discoveries of conventional resources was only 4.9 billion boe in the first six months of 2020, the weakest performing six months in the 21st century, according to Rystad Energy.

Oil and gas resource volumes fell 42% year/year, with discoveries down 31%.

“The average monthly discovered volumes so far this year are estimated at 810 million boe, a 34% drop from the same period last year,” Rystad analysts said.

Still, there has been an uptick in natural gas discoveries, signaling a repeat of 2019’s predominant find. According to Rystad, 55% of the volumes found to date this year are categorized as gas, and the top five largest discoveries account for around 68% of the total discovered volumes.

“Last year we saw the highest volumes of discovered resources since the last downturn,” said Rystad upstream analyst Taiyab Zain Shariff. “Based on the large number of high-impact exploration wells planned for this year, 2020 was meant to follow the same path. But then Covid-19 struck and the oil market crashed in 1Q2020, resulting in delays and cancellations as operators cut budgets.”

The monthly average to date in 2020 was pulled down primarily by June, when only three small onshore discoveries were made, adding around 16 million boe to volumes. January and May were considered the most successful in the first half of the year because of significant discoveries in Guyana, Russia, Suriname and the United Arab Emirate, according to Rystad.

A total of 49 conventional oil and gas discoveries were made through June, with 27 announced during the global lockdown and travel restriction period, analysts said.

“While these travel bans and the associated logistical issues didn’t have much of an effect on projects in the testing and completion phase, they did cause delays for projects in the initial and ongoing drilling phase that required crew changes. This could be one of the reasons for the lower number of discoveries in May and June.”

In-progress and planned high-impact wells have the potential to add up to 5.0 billion boe to the global tally, said the Rystad analysts. However, “unpredictable oil markets and operators’ budget cuts on top of the Covid-19-related logistical issues,” are challenges for the exploration sector.

“It is estimated that the global offshore exploration activity this year might reach its lowest point in 20 years, with discovered volumes falling even lower than they were in 2016.”