Overall drilling activity in the United States held steady to close out 2021, with the combined domestic count finishing unchanged at 586 for the week ended Friday (Dec. 31), according to updated figures published by Baker Hughes Co. (BKR). 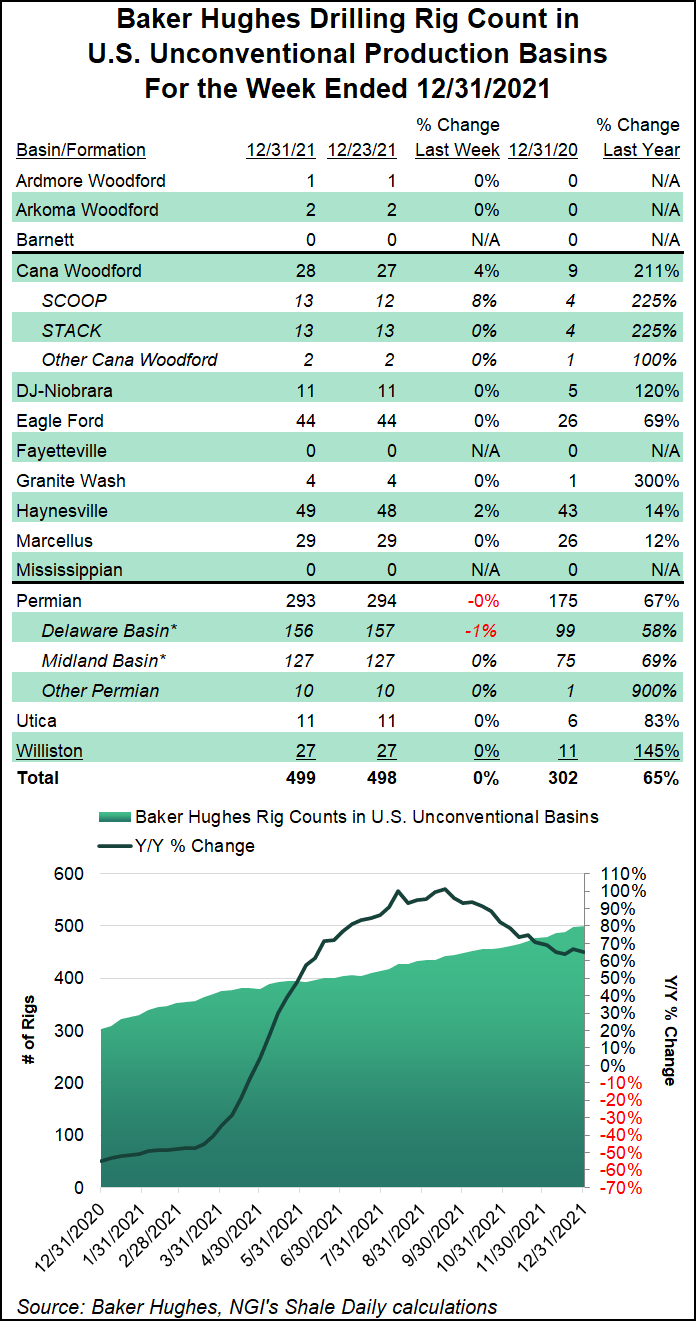 Total oil-directed rigs in the United States held steady at 480, while natural gas-directed rigs were similarly unchanged at 106. Rig totals on land and in the Gulf of Mexico were also flat week/week in the latest BKR tally, which is based partly on data provided by Enverus.

Directional and vertical rig totals each declined by one week/week, offset by a two-rig increase in horizontal units.

The Canadian rig count, meanwhile, fell 43 units to end at 90, up from 59 in the year-earlier period. Declines centered on the oil patch, where the Canadian count saw a net decrease of 45, partially offset by a two-rig increase in natural gas-directed units, the BKR data show.

Broken down by major play, the Cana Woodford and Haynesville Shale each added one rig week/week, while the Permian Basin saw one rig exit for the period.

In the state-by-state count, Louisiana, New Mexico and Oklahoma each added a rig week/week. Texas posted a net decrease of two rigs for the period, while Utah saw one rig exit, according to BKR.

As the calendar now turns to 2022, energy executives appear to be entering the new year with a bullish mindset, based on the results of a recent survey.

According to the latest quarterly survey by the Federal Reserve Bank of Dallas, executives in the energy breadbasket of the country are forecasting Henry Hub natural gas prices to average $4.06/MMBtu at the end of 2022.

The Dallas Fed, as it is known, every three months surveys exploration and production companies and oilfield services firms headquartered in the Eleventh District, which encompasses Texas, Northern Louisiana and southern New Mexico.

For West Texas Intermediate (WTI) oil, respondents predicted a year-end 2022 price averaging $75/bbl, with a range of $50 to $125. WTI spot averaged $71 during the survey collection period. 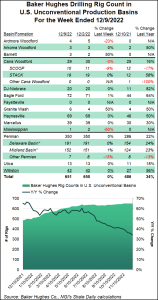 A slowdown in both oil- and natural gas-directed drilling activity in the United States saw the domestic rig count drop four units to 780 for the week ended Friday (Dec. 9), according to the latest data from oilfield services provider Baker Hughes Co. (BKR). Total oil-directed rigs were down two domestically week/week, with natural gas-directed…