High global oil inventory levels and surplus production capacity will keep Brent crude prices near $40/bbl through the end of the year, with prices expected to climb to an average $47/bbl in 2021, according to a recent forecast from the Energy Information Administration (EIA). 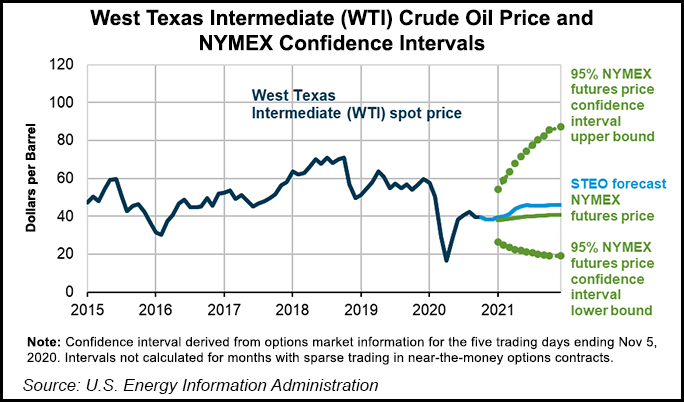 U.S. crude production fell to a two-and-a-half-year low of 10.0 million b/d in May but has since increased as tight oil operators have brought wells back online in response to higher oil prices, according to EIA.

“EIA estimates that production will rise to 11.2 million b/d in November,” the agency said. However, output is expected to fall to an average of 11.0 million b/d in 2Q2021 “because new drilling activity will not generate enough production to offset declines from existing wells.”

Increased drilling activity later next year should help grow U.S. output to an average 11.3 million b/d in 4Q2021, according to EIA.

EIA cautioned that its projections come with “heightened levels of uncertainty” due to continued changes in responses to the Covid-19 pandemic.

Natural gas spot prices at Henry Hub are poised to ascend to an average $3.42/MMBtu in January on a combination of space heating demand, rising liquefied natural gas (LNG) exports and lower production, according to EIA. The agency expects monthly average spot prices to remain above the $3 mark through 2021, averaging $3.14 for the year, a dollar improvement over the projected full-year 2020 average of $2.14.

LNG exports have been booming recently, and EIA’s measure of October export volumes showed a clear uptrend. EIA estimated exports averaged 7.2 Bcf/d in October, up 2.3 Bcf/d from September volumes, marking the largest month/month increase since Lower 48 exports of the super-chilled fuel began in 2016.

“Higher global forward prices for LNG indicate improving netbacks for buyers of U.S. LNG in European and Asian markets for the upcoming winter season,” EIA said. “The increased prices come amid expectations of natural gas demand recovery in those markets and potential LNG supply reductions because of outages at several LNG export facilities in the Pacific Basin and Atlantic Basin.”

Total Lower 48 working gas in underground storage ended October at close to 4.0 Tcf, 5% higher than the previous five-year average and the second highest end-of-October level on record, according to EIA.

Such a storage cushion heading into the winter heating season may prove necessary, as EIA expects inventory draws to outpace the five-year average over the next few months, putting end-of-March stockpiles at an estimated 1.5 Tcf, 16% lower than the 2016-2020 average.

This comes as monthly average dry gas production is forecast to decline to 87.0 Bcf/d by April 2021 before “increasing slightly” from there, according to EIA. That would represent a decline of 10 Bcf/d from monthly average production of 97.0 Bcf/d recorded for December 2019.

“The increase in crude oil prices is expected to raise associated gas production from oil-directed wells in late 2021,” particularly in the Permian Basin, the agency said.

In 2021, total U.S. natural gas consumption is set to decline an additional 5% from 2020 levels, to an average 79.4 Bcf/d. Driving these declines will be higher natural gas prices curbing consumption in the power sector, according to EIA projections.