The U.S. natural gas rig count rose two units to 146 for the week ended Friday (May 6), while the Gulf of Mexico (GOM) added three rigs to raise its tally to 16, according to updated figures published by Baker Hughes Co. (BKR). 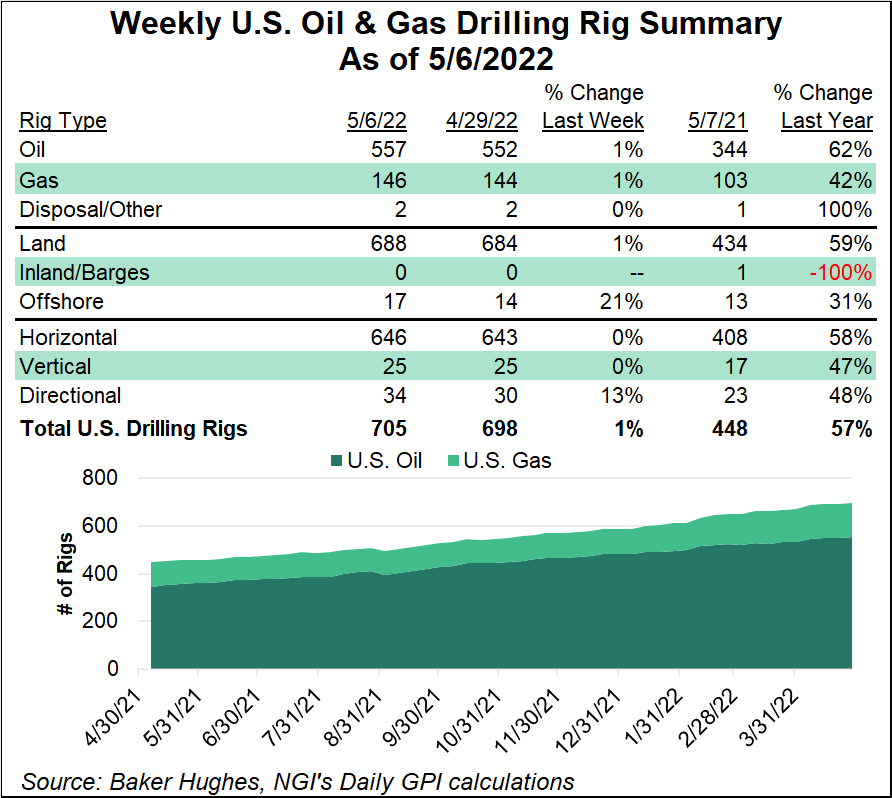 Including the addition of five oil-directed rigs, the combined domestic rig count increased by seven to 705 for the week, 257 units ahead of its year-earlier total of 448. Four rigs were added on land, alongside the three GOM rigs added for the period. Directional rigs increased by four domestically, along with a net increase of three horizontal rigs, according to the BKR numbers, which are partly based on data from Enverus.

The Canadian rig count, meanwhile, fell four units to end the week at 91, up from 55 in the year-earlier period. Declines included three oil-directed rigs and one natural gas-directed unit.

Broken down by major drilling region, the Marcellus Shale saw a two-rig increase for the period, raising its total to 39, up from 30 in the year-ago period. The Granite Wash, Haynesville Shale and Mississippian Lime each added one rig to their respective totals. Elsewhere among drilling regions, the Cana Woodford posted a one-rig decline for the week to fall to 25 active units, up from 12 a year ago.

In the state-by-state count, Louisiana led with an increase of four rigs week/week, with Oklahoma and Pennsylvania each adding two rigs. New Mexico added one rig to its total, while Alaska and Texas each posted one-rig declines, the BKR data show.

OPEC and an allied group of oil-producing countries earlier in the week agreed to extend a measured pace of production increases through June. The cartel said in a brief statement that a modest bump next month would support a balanced global market by the end of June.

Specifically, OPEC-plus said it would target a 432,000 b/d increase in June, holding to a gradual pace of escalation launched last August. Since then, the cartel has targeted monthly output bumps of about 400,000 b/d.