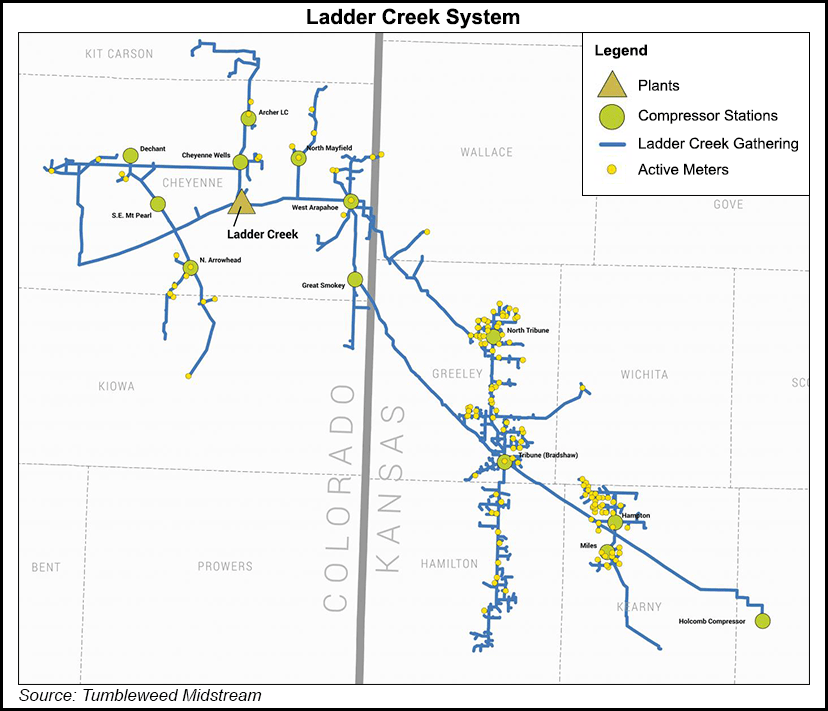 Tumbleweed Midstream LLC, which serves natural gas producers in Colorado and Kansas, has executed three long-term gathering and processing agreements that have quadrupled production at its Ladder Creek Helium Plant.

Two of the new agreements for the plant in eastern Colorado would more than double the inlet volume to 12 MMcf/d, while the third contract is expected to boost output in the next three months by another 3-5 MMcf/d.

“We have a first-class team that has worked hard with the area’s natural gas producers and with our helium tolling customers,” CEO Durrell Johnson said. “These results support our original position that the helium resource of this area is far from depleted.

“Helium is a highly valuable part of the natural gas stream in eastern Colorado and western Kansas,” providing “premium netbacks to the gas producers in the region. Despite the recent downturns in oil and natural gas pricing, helium demand remains strong and consistent.”

Johnson created Tumbleweed to acquire the Ladder Creek assets from DCP Midstream, and it completed the takeover last December.

The additional throughput from the three agreements is expected to increase Ladder Creeks’ helium output to more than 200,000 Mcf/d, or around 65 MMcf/year.

Gas produced in eastern Colorado and western Kansas has a high helium content, which allows Tumbleweed to return premium netbacks to producers and incentivize the growth, management noted. The privately held operator purifies raw helium from suppliers as far away as Arizona and Canada.

“Several new and existing producers in the region have initiated exploration and development plans for helium-rich natural gas. Two existing step-out locations are being developed where previously drilled wells with helium-rich content have been stranded in the past.”

Processing capacity at the Ladder Creek cryogenic processing plant is 40 MMcf/d, expandable to 50 MMcf/d. Tumbleweed expects that the plant could be at capacity within two years. The company plans to explore plant expansions “as demand warrants.”

Ladder Creek uses state-of-the-art cryogenic processes to extract helium and natural gas liquids from raw gas, with the helium purified to 99.999% and its temperature reduced to negative 458 F for transport to customers as a liquid.

The Ladder Creek system is supported by long-term acreage dedications from producers across a 1,000-square-mile area that spans Colorado’s Cheyenne, Kit Carson and Kiowa counties, as well as the Kansas counties of Hamilton, Greeley, Wichita, Kearney, Wallace and Finney. Formations explored in the region include the Chester, Maramton, Morrow, Mississippian and Spergen, management noted.

Alberta, Canada’s chief natural gas producing province, in May set out to break into international markets for a form of helium that fetches prices up to 100 times higher. Alberta, which announced a token helium royalty rate, promised a review in 2025 to adapt to competitive conditions. Richmond, VA-based Weil Group Resources wants to build CryoHub, a helium refining, freezer, and delivery operation at Medicine Hat in southeastern Alberta.