In another sign of a developing international trade war, the Trump administration has enacted a 25% tariff on a host of products imported from China, including parts used for offshore oil and natural gas drilling and production platforms. 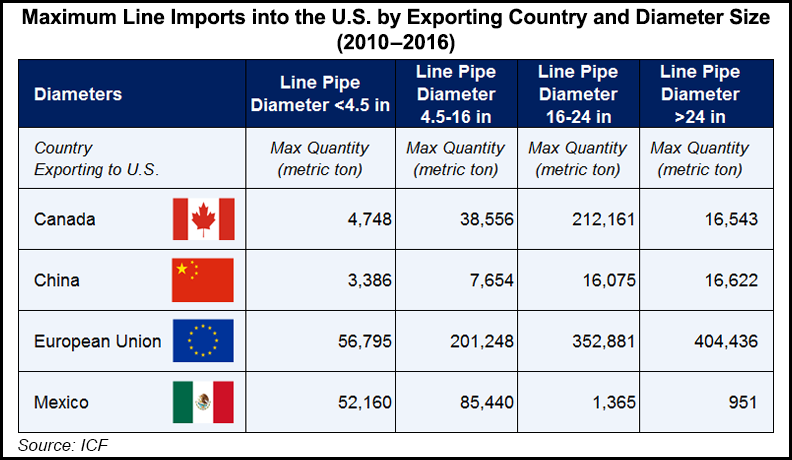 On Friday, the office of U.S. Trade Representative (USTR) Robert Lighthizer issued two lists of tariff lines covering Chinese products collectively valued at about $50 billion in 2018 trade values. The first list, containing 818 tariff lines that cover about $34 billion worth of Chinese imports, includes the parts for offshore drilling as well as check valves, pressure-reducing valves, and safety or release valves used for pipes and tanks, among other things.

Meanwhile, a second list contains 284 proposed tariff lines identified by a USTR committee “as benefiting from Chinese industrial policies, including the ‘Made in China 2025’ industrial policy,” that will be subject to further review. The second list covers about $16 billion worth of Chinese imports, including “gas supply or production meters,” which could impact oil and gas producers.

“We must take strong defensive actions to protect America’s leadership in technology and innovation against the unprecedented threat posed by China’s theft of our intellectual property, the forced transfer of American technology, and its cyber attacks on our computer networks,” Lighthizer said. “China’s government is aggressively working to undermine America’s high-tech industries and our economic leadership through unfair trade practices and industrial policies like ‘Made in China 2025.'”

USTR said it would provide the public with an opportunity to request an exemption from the new tariffs for various products, adding that it would issue a notice in the Federal Register “with details regarding this process within the next few weeks.”

Beijing immediately vowed to retaliate. In a translated statement, China’s Commerce Ministry said that despite several rounds of trade negotiations, the United States “has disregarded the consensus it has formed and is fickle, provoking a trade war.” The ministry added that China “does not want to fight a trade war…

“We will immediately introduce taxation measures of the same scale and the same strength. All the economic and trade achievements previously reached by the two parties will be invalid at the same time.”

For his part, Trump warned that the United States “will pursue additional tariffs if China engages in retaliatory measures, such as imposing new tariffs on United States goods, services, or agricultural products; raising non-tariff barriers; or taking punitive actions against American exporters or American companies operating in China.”

Late last month, the European Union (EU), Canada and Mexico each took retaliatory steps against the United States after the Trump administration imposed a 25% tariff on steel imports and a 10% tariff on aluminum imports. Both Brussels and Mexico City have since filed complaints with the World Trade Organization over the tariffs. Steel and aluminum imported from China have been subject to the tariffs since May 1.

The American Petroleum Institute (API) said it was concerned by the Trump administration’s “lack of transparency” leading up to its decision to levy the tariffs on China, adding that the move could have a “detrimental effect” on domestic oil and gas producers.

“The lack of transparency in the process, as well as the absence of consultation with the U.S. natural gas and oil industry to determine the potential impact on U.S. investments, jobs, and consumers, is especially troubling,” said API CEO Jack Gerard. He added that the tariffs “will have a real impact on current and future U.S. energy projects, and could ultimately harm our energy renaissance which provides high-paying jobs and affordable and reliable energy to Americans.

“Instead of utilizing a transparent decision-making process that provided room for input from key stakeholders, the administration continues to take serious missteps in the trade arena that could undermine American jobs and America’s role on the global energy stage. Trade wars with key trading partners will be detrimental to the U.S. economy and consumers.”

According to a report released last year by ICF, the United States imported a maximum quantity of 16,622 metric tons of steel line pipe — measuring greater than 24 inches in diameter — from China between 2010 and 2016, a nearly identical figure to Canadian imports (16,543 metric tons) but far below imports from the EU (404,436). The report was commissioned by API, the Interstate Natural Gas Association of America, the Association of Oil Pipe Lines, the American Gas Association, and the GPA Midstream Association.

ICF said steel prices experienced “a China-led ‘boom'” in 2007 and 2008, when demand for energy, metals and other commodities surged, and “a large number of pipelines were under construction in the U.S. and around the world.” But prices cooled after the 2008 worldwide financial crisis.

“The slow economic recovery after the financial crisis and the increase in U.S. gas shale and tight oil production led to increasing investment in pipeline and another peak in line pipe imports in 2012,” ICF said. But the report added that “the collapse in oil prices in late 2014 led to reduction in oil and gas drilling and investment in new flow lines, gathering system and pipelines leading to a significant drop in line pipe imports in 2016.”

In a related move, the Trump administration slapped a four-year tariff on imported solar cells and modules last January — starting at 30% for the first year, but declining 5% annually to a final rate of 15% in the fourth and final year. Lighthizer’s office said China dominates the global supply chain for solar cells and modules, accounting for nearly 70% of total planned global capacity expansions announced in the first half of 2017. China currently produces 60% of the world’s solar cells and 71% of solar modules.