President Trump has named Cheryl LaFleur acting chairman of FERC, and Norman Bay has resigned his appointment to the agency, according to a pair of statements released within hours of each other Thursday. Bay’s resignation, to take effect Feb. 3, will leave the agency with only two commissioners, not enough to achieve a quorum. 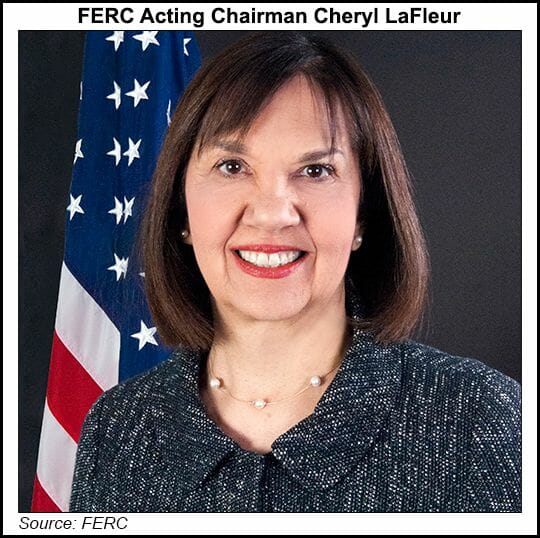 “It is an honor to again be asked to serve as acting chairman of the Federal Energy Regulatory Commission, and I thank President Trump for the opportunity,” LaFleur said upon the announcement of her second appointment to lead FERC.

“While I recognize that FERC is in a state of transition as we await nominations to fill vacant seats at the agency, it is important that FERC’s work on the nation’s energy markets and infrastructure move forward. I would particularly like to thank Chairman Norman Bay for his leadership of the Commission over the past two years, and I look forward to working with him, Commissioner Colette Honorable, the terrific staff throughout the agency, and future colleagues at FERC to continue to address the important energy issues facing our nation.”

Those issues will have to wait, however. Without a quorum, FERC can conduct routine business, but it cannot vote on important projects or rules. Republicans are expected to move swiftly to nominate and confirm new commissioners to fill one or more of the three vacant seats. Currently, the only commissioners are LaFleur and Honorable, both Democrats. FERC can have as many as five commissioners, no more than three from any one party. There have been only three commissioners at FERC — all of them Democrats — since September, when Republican Tony Clark resigned. Another Republican, Philip Moeller, resigned in October 2015.

“Norman Bay’s resignation from the Commission will unfortunately leave FERC without a quorum,” said Don Santa, CEO of the Interstate Natural Gas Association of America. “This means the Commission will be unable to act on pending natural gas infrastructure projects of national importance.

“We encourage the Commission to act on all matters that are ripe for decision prior to Commissioner Bay’s departure, and especially pending applications for authority to construct needed interstate natural gas pipelines. We also urge the Commission to exercise to the fullest extent possible its authority to delegate certain functions to the staff in anticipation of the period during which it will lack a quorum.

“Given President Trump’s focus on infrastructure and domestic energy resources, we urge him to nominate candidates to fill the commission’s three existing vacancies as soon as possible. We, likewise, urge the Senate to act expeditiously on those nominations.”

In a six-page letter posted on the FERC website late Thursday, Bay said he was resigning effective Feb. 3 and provided a list of accomplishments achieved during his tenure.

“I am proud of what we have accomplished on behalf of the American people over the past 21 months in furthering FERC’s mission of providing efficient, reliable, and sustainable energy to consumers,” Bay said.

“…The last few years have brought dramatic change to the energy space. The shale revolution and an abundance of low-priced natural gas, technological innovation, the expanded use of renewable energy, increased energy efficiency and flat load growth, state and federal public policy, and consumer choice have been drivers for change. As chairman, I have sought to help consumers realize the benefits from this change, while assisting the wholesale markets and industry in adapting to the change and maintaining just and reasonable rates and reliability.”

Bay, whose nomination was pressed by the Obama administration despite opposition from Republicans, was sworn in at FERC in 2014; the reversal of roles for he and LaFleur at that time was the result of a political deal made during the vote on his confirmation. Bay has spent much of his professional career working for the federal government. From July 2009 to July 2014, he was director of FERC’s Office of Enforcement. Before that he held various positions in the Justice Department.

LaFleur has been a member of the Commission since 2010. She served as acting chairman from November 2013 to July 2014, as chairman from July 2014 until April 2015, and as commissioner since then. A Democrat, LaFleur had more than 20 years’ experience as a leader in the electric and natural gas industry before joining FERC, serving as executive vice president and acting CEO of National Grid USA, which delivers electricity to 3.4 million customers in the Northeast.