The Trump administration on Monday began a formal push that possibly could allow oil and natural gas leases to be auctioned in Alaska’s pristine Arctic National Wildlife Refuge (ANWR) before Joseph R. Biden Jr. is sworn into office in January. 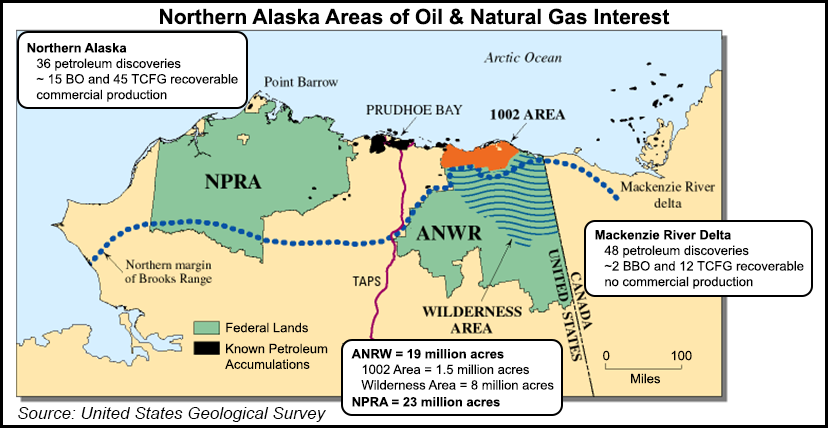 According to a preliminary notice in the Federal Register to be published on Tuesday, the Bureau of Land Management (BLM) Alaska State Office will call for nominations on lease tracts for an upcoming Coastal Plain Oil and Gas Lease Sale.

“Receiving input from industry on which tracts to make available for leasing is vital in conducting a successful lease sale,” said BLM’s Chad Padgett, Alaska state director. “This call for nominations brings us one step closer to holding a historic first Coastal Plain lease sale,” which would satisfy “the directive of Congress” in the 2017 Tax Cuts and Jobs Act (TCJA).

The first Coastal Plain lease sale “will offer at least 400,000 acres of high potential hydrocarbon lands for bid,” the BLM said. “The energy potential of the ANWR Coastal Plain was unlocked after 30 years of gridlock…finally settling the question of whether the leasing, exploration, and development of oil and gas will occur on about 8% of the refuge that lies with an oil and gas province of national significance.

“The legislation was unique because it did not just allow for an oil and gas development program, it requires one that delivers energy to the nation and revenue to the Treasury.”

The law changed the purposes of ANWR management to include oil and gas development “in a small but potentially energy rich area along the Arctic coast,” BLM noted.

The Interior Department also has been directed to “carry out an aggressive, competitive energy development program that could keep oil flowing in the nation’s energy artery, the 800-mile Trans-Alaska Pipeline, decades from now.”

Under the sales notice, comments would be taken until Dec. 17, and a final notice could occur 30 days later. That makes it possible for an auction before Biden takes office on Jan. 20. However, any sales would be subject to review by the incoming administration.

Whether producers want to pursue drilling in the controversial region remains a question. Abundant Lower 48 oil and gas reserves may be unearthed for less cost than drilling into frozen tundra. There also are expected to be lawsuits before any development could begin.

Producers have pulled out of Alaska in recent years because of high drilling and shipping costs. BP plc, for example, sold its legacy Alaska operations to Houston-based Hilcorp Energy Co. last summer.

In addition, environmental concerns and related financing challenges also serve as roadblocks. Wells Fargo & Co. and Goldman Sachs Group Inc., two of the biggest U.S. banks, have said they would not fund drilling in the ANWR.

Many oil and gas operators also are revamping their strategies as they transition their portfolios, which could crimp support for another drilling opportunity.

The American Petroleum Institute said developing the refuge was “long overdue and will create good paying jobs and provide a new revenue stream for the state, which is why a majority of Alaskans support it.”

A sale “could create a high-value symbolic target for the incoming Biden administration, and Washington holds vast powers to stall — if not stop — progress on federal lands,” said ClearView Energy Partners LLC analysts. “President-elect Biden’s yet-to-be-named nominee to head the BLM would likely face legal challenges over any such efforts, and strict constructionist, Trump-era federal judges could make it harder for BLM to stop ANWR outright. The TCJA requires that one sale occur by December 2021 and the other by December 2024.”
For the Biden administration, said analysts, “a series of slow losses — and all the uncertainty that repeated slow-walking and court proceedings might create — could be tantamount to a win (big spenders have left the Arctic empty-handed in the past).”

The Alaska Wilderness League’s Adam Kolton, executive director, said the sale was “one more box the Trump administration is trying to check off for its oil industry allies before vacating the White House in January. It is disappointing that this administration until the very end has maintained such low regard for America’s public lands, or the wildlife and Indigenous communities that depend on them.”