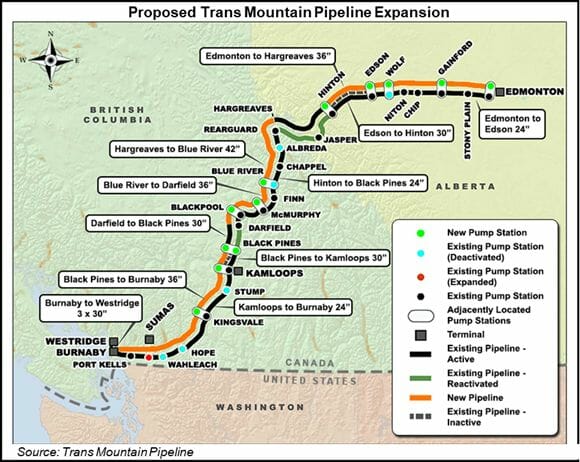 The official endorsement arrived studded with conditions crafted by the National Energy Board (NEB) and Liberal ministers to comply with a verdict last August by the Canadian Federal Court of Appeal that overturned the first cabinet approval.

Moody’s Investors Services swiftly rendered an economic verdict that expressed in a nutshell the unanimously wary reception of the second Trans Mountain decision by industry and the governments in Canada’s oil- and natural gas-producer provinces.

“The federal government’s approval of the Trans Mountain pipeline expansion is a positive step toward further hydrocarbon development in Canada,” said Moody’s. “However, the project still faces significant political, regulatory, and judicial challenges, and ultimately we see a tremendous amount of execution risk up until the oil starts flowing.”

Cabinet aides said construction could begin this year but set no date for work to start by the pipeline, which the Canadian government bought a year ago for C$4.5 billion ($3.4 billion) when first sponsor Kinder Morgan Canada Ltd. gave up hope for the expansion.

Trans Mountain has operated for 66 years, and 85% of the C$9 billion ($6.8 billion) in new facilities planned for tripling capacity to 890,000 b/d would be built on the established 1,147-kilometer (688-mile) route to Vancouver Harbor from Edmonton.

However, the project stands out as a growth enabler for Canada’s top natural gas consumer and prime target of international environmental and aboriginal opposition to fossil fuels, Alberta thermal oilsands production.

The Vancouver native tribe that led the successful 2018 protest lawsuit, the Tsleil-Waututh Nation, pledged to continue the fight and was echoed by an array of Canadian environmental groups, especially in British Columbia.

Chief Leah George Wilson posted an open public letter that declared, “Tsleil-Waututh is prepared to use all legal tools necessary to ensure that our rights are protected for our future generations. Our obligation is not to oil. Our obligation is to our land, our water, our people, our future. This project represents a risk that we cannot take.”

Prime Minister Justin Trudeau, preparing for a fall national election that has already ignited party rivalries for recognition as environmental champions, promised to use all government revenues from Trans Mountain for renewable energy projects.

“We need to create wealth today so we can invest in the future,” Trudeau said. “We need resources to invest in Canadians so they can take advantage of the opportunities generated by a rapidly changing economy.”

“As we’ve seen over the past few years, anything can happen with our neighbors to the south,” said Trudeau.

His Liberal cabinet’s second Trans Mountain approval enables the NEB to resume an unfinished stage in the Canadian regulatory process, detailed route hearings to nail down exact locations and construction methods for the planned new facilities.

On the eve of the appellate court setback last August the detailed route procedure was completed for 72% of Trans Mountain. In a new filing this week, the project reported that negotiations continue in unresolved cases among 2,800 landowners that would be directly affected by construction.