The U.S. Energy Information Administration (EIA) reported an injection of 102 Bcf natural gas storage for the week ending May 29, coming in at the low end of a range of market estimates and providing Nymex futures a modest lift. 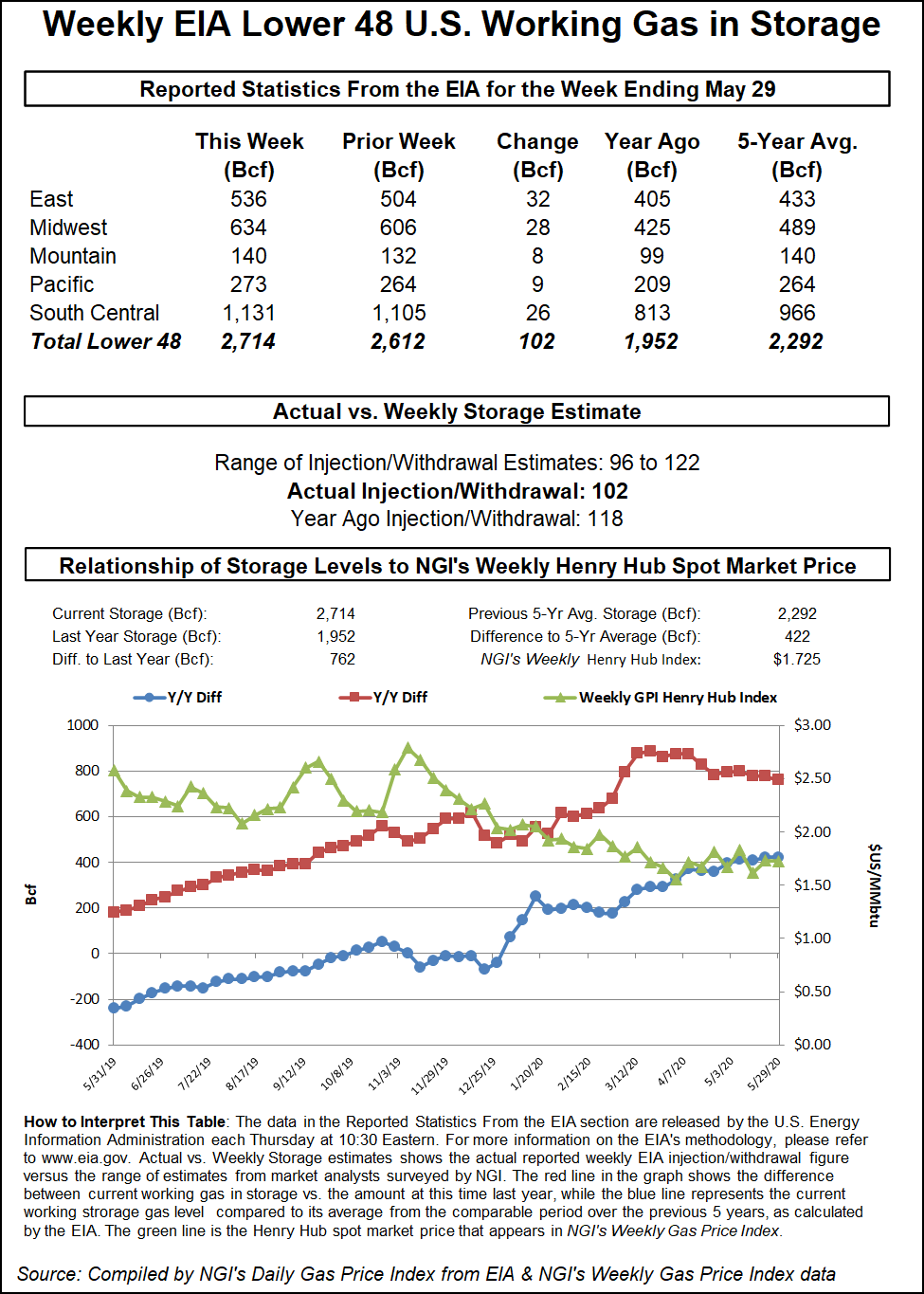 The build was lower overall than analysts had anticipated and below the prior week’s injection of 109 Bcf, but inventories remained above average levels at a time of elevated demand uncertainty. Gas futures traded in a narrow range after the EIA report.

Participants on The Desk’s online energy platform Enelyst generally viewed the latest data as positive for prices. However, as one participant noted, it “still seems demand has a lot of improvement” to make before aligning with supply.

“Balance wise, this is a tighter number, and in and of itself would suggest lower risks for containment issues this fall,” Bespoke Weather Services said. The latest report, however, “carries a little less importance since the market will want to see balances after this week’s decline in liquefied natural gas (LNG) before believing in a bullish case.”

Prior to the report, a Wall Street Journal poll of 12 analysts, brokers and traders produced injection estimates ranging from 96 Bcf to 122 Bcf, with an average of 110 Bcf, matching that of a Reuters survey. A Bloomberg survey showed a median of 111 Bcf. NGI projected a 104 Bcf build.

Analysts have expressed concern that triple-digit injections, with the latest the fourth such build in the last five weeks, could signal that supply remains uncomfortably ahead of demand from the commercial and industrial sectors, where energy use is only gradually recovering as coronavirus-related shelter-in-place measures are relaxed.

The latest 102 Bcf injection compares with the 118 Bcf increase in storage recorded in the same week a year earlier and the five-year average build of 103 Bcf for that week.

The latest build lifted inventories to 2,714 Bcf, above the year-earlier level of 1,952 Bcf and above the five-year average of 2,292 Bcf.

By region, the East and Midwest regions led with builds of 32 Bcf and 28 Bcf, respectively, according to EIA. The South Central build of 26 Bcf followed and included a 21 Bcf injection into nonsalt facilities and a 5 Bcf build in salts. Pacific inventories grew by 9 Bcf, while Mountain region stocks rose by 8 Bcf.