Williams is holding an open season through Sept. 29 for its Western Marcellus Pipeline Project, a 1-2 Bcf/d expansion of its Transco interstate pipeline to provide incremental firm capacity to markets in the Mid-Atlantic and southeastern United States by late 2018. 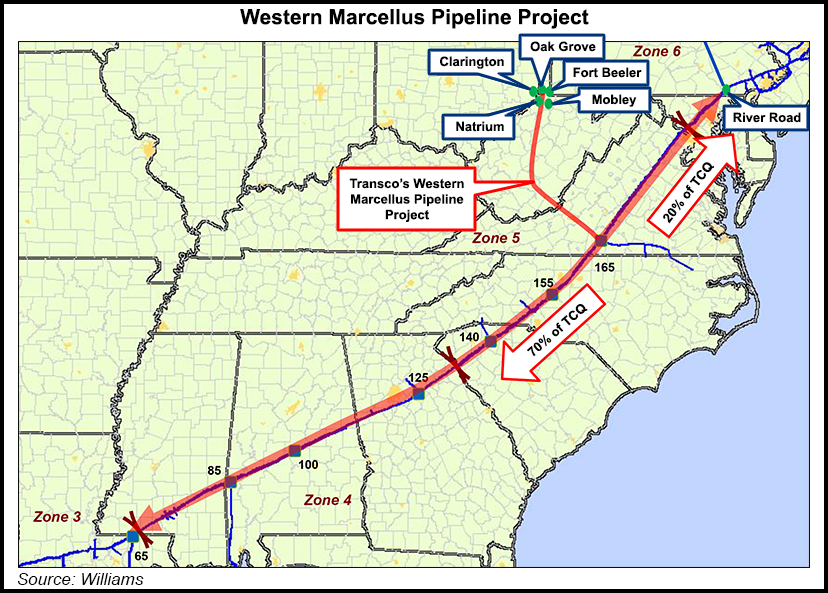 Receipt points for the new capacity would be in the western Marcellus and Utica supply areas for service to points as far south as Transco’s Zone 3 compressor Station 65 in Mississippi and as far north as the proposed Zone 6 River Road point in Pennsylvania. The project would connect Williams’ Ohio Valley Midstream processing and gathering system in northern West Virginia with Transco.

The project is being designed to consist of a greenfield pipeline extending from the Rockies Express pipeline near Clarington, OH, and Williams Oak Grove processing plant in Marshall County, WV, to Transco compressor Station 165 in southern Virginia. From there, mainline modifications would allow both northbound flow to the proposed River Road point and southbound flow to Station 65 for significant portions of the project capacity.

Just two years after the proposed 2018 in-service for the project, the Marcellus/Utica region is projected to be putting out 25 Bcf/d, according to a recent analysis by ICF International (see Shale Daily, April 25).

The Transco project announcement follows plans from Dominion, Duke Energy and two utility partners for a 1.5 Bcf/d, 550-mile system that would move Appalachian gas from West Virginia to North Carolina (see Daily GPI, Sept. 2; May 28). Also on deck are plans from EQT Corp. and NextEra Energy Inc. unit NextEra US Gas Assets LLC for their Mountain Valley Pipeline project, which would deliver Marcellus and Utica gas to markets in the Southeast (see Shale Daily,June 12). It recently received 1.5 Bcf/d of binding shipper commitments during an open season (see Shale Daily, Sept. 2).

In a comment on the Transco project, analysts at Tudor, Pickering Holt & Co. Friday said they “think one, maybe two pipes” to Virginia/North Carolina get built, and they said Williams lags the other two in securing capacity commitments.

Transco will consider variations to the proposed allocation “on a not-unduly discriminatory basis” and said it will work with requesting shippers to accommodate their needs. “Transco will entertain requests for alternate receipt locations along the Greenfield segment during the open season; however, Transco may or may not choose to provide access from those locations as a part of the project,” it said.

A cost of service-based, daily reservation recourse rate will be available for the firm service. The estimated initial recourse rate will be calculated using Transco’s current estimated cost of the project facilities, estimates for operation and maintenance expenses based on costs for similar facilities, the billing determinants under the project and other cost factors. Transco said it expects to offer shippers a negotiated daily reservation rate in the low $0.80s to mid $0.90s per Dth/d for firm service under the project, depending upon the final project volume, receipt points and scope.

The final capacity, scope and cost of the Transco Western Marcellus Project will be determined by the results of the open season. The project will require approval from the Federal Energy Regulatory Commission. For customer information, contact James Corley, (713) 215-4607.