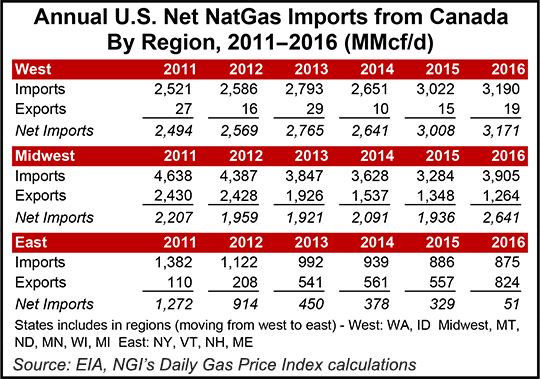 Centra Gas Manitoba Inc. predicted “far-reaching effects on gas markets” would result from the proposal for a 46% toll cut to C77 cents/gigajoule (61 cents/MMBtu) for 1.4 Bcf/d from 23 Alberta and British Columbia (BC) producers.

In the Toronto region, Enbridge Gas Distribution called the plan “cross-subsidization” of western producers at the expense of eastern consumers and said the deal should at most only be approved for the first three years of its proposed 10-year duration. A review of TransCanada’s overall toll structure after 2020 is already on the industry and regulatory agenda.

The objections surfaced in lengthy submissions to the National Energy Board (NEB), which is committed to trying to make an approval ruling in time to hit a Nov. 1 target for the start of TransCanada’s traffic revival program.

Centra endorses the boost for Alberta and BC producers but urged the pipeline and the NEB to add the southern Manitoba gas trading hub, on the United States border at Emerson, as a destination for discounted toll deliveries. TransCanada’s new deal covers only shipments all the way to Union’s Dawn storage and trading point in Ontario.

Without the additional drop-off point, the low-cost flows will “cannibalize” full-priced deliveries, further raise the old tolls by draining shipments away from the capacity they cover and erode supply options for Manitoba gas buyers, warned Centra.

A market review that Union commissioned from Fairfax, VA-based ICF estimated TransCanada’s plan would only raise the overall value of Alberta and BC gas by a modest average of C11 cents/GJ, or 9 cents/MMBtu.

The net gain to the western Canadian supply industry as a whole is rated as unlikely to drive enough drilling to fill the bargain toll package with new production.

“About 45%of the expected flows on the proposed service will be cannibalized from flows using existing TransCanada services,” said ICF researchers.

The lower delivered-cost western Canadian gas is forecast to take only a “slightly” enlarged share of markets in Ontario, Quebec and the northeastern United States, while “pushing prices down” in competition with Lower 48 Marcellus and Utica shale production.

But from the Alberta and BC viewpoint, the TransCanada deal spells a chance to stop worsening erosion of legacy mainstay long-distance sales that western producers are continuing to lose to U.S. output next door to eastern markets.

The latest NEB gas trade data fuels the request by TransCanada and western producers, backed by the BC and Alberta governments, for a prompt ruling on the proposed bargain toll service as a rescue from further sales deterioration.