It was probably just as well that physical natural gas traders got their deals done ahead of the release of storage data by the Energy Information Administration (EIA) on Thursday. By doing that, they not only were spared a storage build larger than anticipated, but they also were spared a bloodbath in oil markets as prices fell in response to signs the OPEC-driven price cuts aren’t reducing the global crude glut. 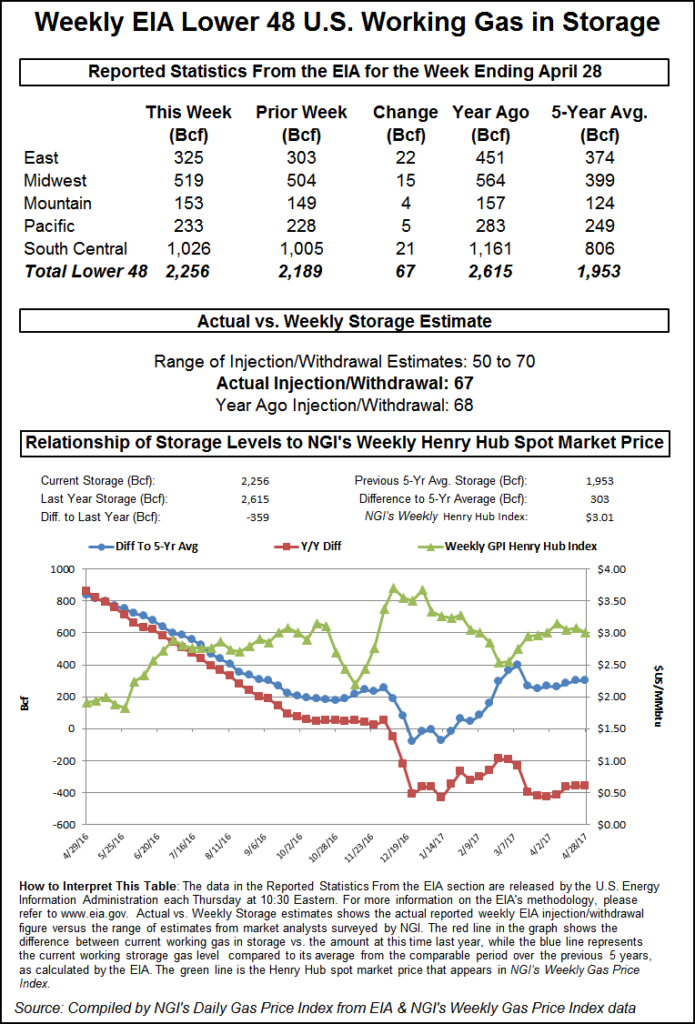 The NGI National Spot Gas Average fell 2 cents to $2.91, and weakness in the Northeast, Appalachia, and the Southeast outdid firmer pricing in the Midwest, West Texas, Rockies, and California.

Northeast gas prices showed surprisingly little response to forecasts of upcoming cold and storminess likely to send temperatures 5 to 15 degrees below normal. “Chilly, fall-like air will be accompanied by rain and snow showers across the northeastern United States this weekend,” said meteorologists at AccuWeather.com. “Enough of a chill will settle in place for a frost to occur in some locations.”

“After a record warm April in many locations throughout the Mid-Atlantic and Northeast, the first weekend of May will provide a stark contrast to April’s summerlike heat,” said AccuWeather.com meteorologist Kyle Elliott.

“Temperatures will fail to exceed the 40s to middle 50s over interior areas by Sunday. Highs will be closer to the 60-degree mark along the Mid-Atlantic and southeastern New England coasts.”

Price changes at other market points were more subdued. Gas at the Chicago Citygate rose a couple of pennies to $2.96, and deliveries to the Henry Hub came in 2 cents lower at $3.07. Packages on El Paso Permian changed hands a nickel higher at $2.74 and Kern River was quoted up 4 cents at $2.76. Gas at the PG&E Citygate rose 4 cents to $3.31.

Before EIA’s storage number was released, Citi Futures Perspective predicted a build of 54 Bcf, and PIRA Energy was expecting a 66 Bcf increase. A Reuters survey of 21 traders and analysts revealed an average 61 Bcf injection with a range of 50-70 Bcf.

Last year 68 Bcf was injected and the five-year average is for a 63 Bcf build.

“We are still kind of stuck in a range, but we didn’t touch the lows from yesterday,” said a New York floor trader. “The market is moving sideways.”

“The DOE reported a larger-than-expected 67 Bcf net injection into U.S. natural gas storage for the week ended April 28, more than the 62 Bcf five-year average refill,” said Tim Evans of Citi Futures Perspective. “This was the third consecutive report that was weaker than what our weather-based model projected, implying a weakening trend in the background supply/demand balance. Even so, we still anticipate below-average storage injections over the next two reports, which may limit the downside for prices.”

“We believe the storage report will be viewed as slightly negative,” said Randy Ollenberger of BMO Capital Markets. “Storage is trending below last year’s levels; however, rising associated gas production should keep U.S. storage levels at, or above, five-year averages, assuming normal weather.”

Inventories now stand at 2,256 Bcf and are 359 Bcf less than last year and 303 Bcf greater than the five-year average. In the East Region 22 Bcf was injected, and the Midwest Region saw inventories rise by 15 Bcf. Stocks in the Mountain Region were greater by 4 Bcf, and the Pacific Region was up 5 Bcf. The South Central Region increased 21 Bcf.

Forecasters looking longer term admitted that the duration of forecast eastern cool was not fully determined. “There remains uncertainty in this [11-15 day] period as it relates to the breakdown of the -NAO [North American Oscillation] and associated blocking features in the northern Atlantic, and a slower progression [Thursday] has the forecast trending cooler once again in the Eastern Half,” said MDA Weather Services in its Thursday morning report to clients.

“Below-normal temperatures are forecast in this region through mid-period but continue to allow for moderation in the latter stages. The West Coast also sees a cooler adjustment, thanks to deeper troughing over the region; and while slight belows are now forecast here, cooler risks are noted among guidance. Warmer leanings are limited to parts of the Central/Rockies.

“Some uncertainty exists with how quickly the cooler anomalies will fade in the Eastern Half, and models suggests this evolution could be slower (a cool risk). Risks are cooler along the West Coast.”