Traders for the week ended Sept. 26 were left with a couple of large unanswered questions as prominent eastern trading points probed lows not seen in 16 years, yet at the same time many cash as well as futures managed to finish at the high end of a longstanding trading range between $3.75 and $4.00. 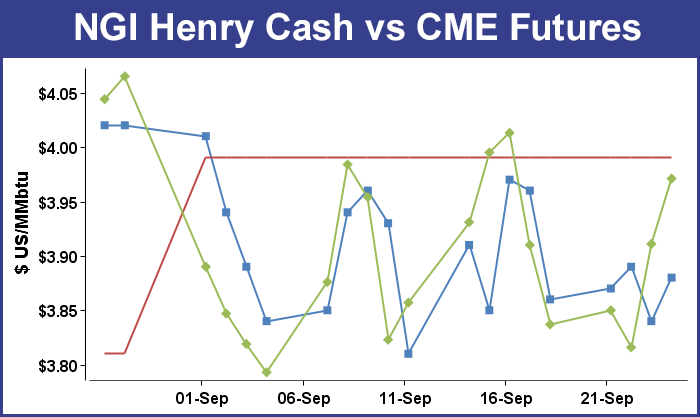 Regional prices varied widely, with California dropping 14 cents to $4.15 and a number of Gulf regions as well as the Midwest posting 6 cent losses.

October futures expired at $3.984, up 14.7 cents on the week, and 2.7 cents higher than the expiration of the September contract.

Thursday’s Energy Information Administration (EIA) storage report raised a few eyebrows, not so much because it was so large, but at the day’s end traders were wondering why the market had elected to ignore all the bearish ramifications. The EIA reported a build of 97 Bcf and once the report was released prices fell only to recover and finish solidly in the black. At the close October had risen 6.0 cents to $3.971 and November was up by 4.9 cents to $4.014.

The bearish EIA storage report may have collided with options expiration, with options trading winning out. Traders did concede, though, that the steady stream of bearish injections expected over the next few weeks may have been priced into the market and that selling dries up at about the $3.85 level.

Comparisons were made to last year’s 82 Bcf injection and the five-year average of 79 Bcf and analyses were looking decidedly bearish as most estimates were coming in around 90-plus Bcf with some reaching the century mark. First Enercast calculated a build of 89 Bcf, and analysts at United ICAP were looking for an increase of 97 Bcf. A Reuters survey of 25 traders and analysts revealed a sample mean of 94 Bcf with a range of 88-101 Bcf.

Industry consultant Genscape calculated a build of 100 Bcf and said its estimate is based on a “composite of our supply and demand flow model — which is expecting an 81 Bcf injection — and our adjusted sample of storage facilities — which is predicting a 101 Bcf injection. Last year, 87 Bcf was injected for the same storage week, and the record high for the week was 111 Bcf set in 2011,” the company said in a report.

Bentek Energy’s flow model calculated an increase of 97 Bcf. “With only seven weeks left until the end of October, including this Thursday’s announcement, storage builds will have to average near 87 Bcf per week in order to reach 3.5 Tcf by October’s end,” Bentek said. The firm said it expects inventories will end October close to that mark and continue to rise into November, eclipsing 3.5 Tcf at peak inventory levels.

Traders sensed that even though the market fell initially when the figures were released, it still was able to absorb a near 100 Bcf build rather easily. “Most guys were looking in the 98 Bcf range, so it came in pretty much as expected,” said a New York floor trader. “To get this market moving one way or another there is going to have to be a big weather-related event. If you look at these numbers, these are big for this time of year, but the market did not react so that has to tell you something.”

Others saw the market indicating ongoing bearishness. “The 97 Bcf build for last week was slightly more than the consensus expectation and also bearish relative to the 79 Bcf five-year average for the date,” said Tim Evans of Citi Futures Perspective. “It suggests a somewhat weaker background supply/demand balance that could also contribute to somewhat larger builds for the weeks ahead. The early price reaction suggests some relief that it wasn’t even larger, but this was bearish news in our view.”

Inventories now stand at 2,988 Bcf and are 386 Bcf less than last year and 426 Bcf below the 5-year average. In the East Region 66 Bcf were injected and the West Region saw inventories unchanged. Inventories in the Producing Region rose by 31 Bcf.

With the expiration of the October contract free of any formidable fireworks, traders are looking for a continuation of range-bound trading. “[Friday’s] trade provided no major surprises as the October contract went off the board in a soft fashion while stretching its discount to around 5 cents against November futures. We have shifted to a neutral trading stance in this market given its ability to shrug off yesterday’s seemingly bearish storage figure as well as mild temperature forecasts that are beginning to stretch toward mid-month in some cases,” said Jim Ritterbusch of Ritterbusch and Associates in closing comments to clients.

Others saw uninspired futures trading as well, and the modest gains did not sway traders from their thinking that the market was headed down to test the low end of its longstanding $3.80-4.00 trading range. “The November settle over $4 could give it a little push, but longer term, look to the downside,” said a New York floor trader. “I don’t think the market can sustain a rally. It may go for a couple of days, but you know what they say. ‘It’s harder to climb a mountain than it is to fall down.'”

Ritterbusch added that “[W]e also recognize that the cold weather factor will be acquiring greater importance next month with the first inevitable cold spell likely to spur a price advance back to the late August highs of around $4.16 per the November contract as a minimum. But, for now, we see supply/usage as comparatively balanced and likely to prompt some additional wide swinging/sideways price action within our expected parameters of about 3.80 and 4.16. With the market currently trading near the mid-point of this range, we will caution against entry from either side and will instead look to approach both sides off of the aforementioned parameters.”

Physical gas for weekend and Monday delivery was mixed in Friday’s trading as double-digit drops at eastern points along with declines in California were able to dominate widespread market strength in the Gulf Coast, Great Lakes and Rockies.

The October futures contract expired on a firm note but was unable to make it over $4. It left that hurdle for the now-spot November contract. At the close October was higher by 1.3 cents to $3.984 and November added 1.5 cents to $4.029.

Weather forecasters called for warm, pleasant weather to envelop the Eastern Seaboard, thus diminishing the need to make three-day deals. “In the wake of the modest midweek nor’easter, sunshine is in store for the Philadelphia area this weekend into Monday,” said AccuWeather.com meteorologists. “High pressure extending from Maine to northeastern Texas will build eastward. Along with the fair weather system will come building warmth. In the Philadelphia area, highs in the lower 80s are in the offing for Saturday and Sunday with abundant sunshine.”

Wunderground.com predicted that the Friday high in New York City of 77 degrees would reach 82 by Saturday but recede to a more seasonal 76 by Monday. The normal high in New York City is 71. Philadelphia’s Friday high of 79 was expected to reach 82 Saturday and ease to 77 Monday. The seasonal high in Philadelphia is 71. Washington DC’s 75 high Friday was forecast to reach 83 Saturday before dropping to 74 Monday. The normal high in the Nation’s Capitol this time of year is 76.

Spot gas prices at several eastern points continued to grope for new lows. The heavily traded Dominion South point fell to $1.58 in Friday for weekend and Monday delivery, the lowest point since it languished at $1.17 in December 1998.

In September 2012 Dominion completed the 110-mile Appalachian Gateway Project, and the end result was a big increase in the amount of Marcellus Shale gas flowing from West Virginia and southwestern Pennsylvania to markets along the eastern seaboard. Thus as a pricing point, the Dominion line is in the thick of Marcellus oversupply.

Analysts said the plunge in not only Dominion South but other eastern points “doesn’t come as much of a surprise. Ever since [Tennessee] Zone 4 Marcellus started showing up as a price hub, we’ve been seeing a lot of downward pressure on those Appalachian production prices because there are so many wells that have been drilled but not completed because there is not enough capacity to take the gas to market,” said Genscape Senior Analyst Rick Margolin.

“As of now there is simply not enough demand in either the Northeast or Southeast where people want to start backhauling to. We are not going to see a whole lot of support for those prices until we see some structural shifts in demand such as LNG, and additional coal to gas switching. Basically, what you are seeing in the Northeast now is analogous to what was happening in the Rockies pre-REX,” he said.

Other eastern points were also weak. Deliveries on Millennium shed 11 cents to $1.63, and gas on Leidy Transco was off 17 cents to $1.61.

New England locations took some big hits, with deliveries to the Algonquin Citygates dropping 34 cents to $3.04 and parcels at Iroquois Waddington falling 53 cents to $3.25. On Tennessee Zone 6 200 L packages were seen at $3.22, down 81 cents.

Power buyers looking ahead to the weekend across the vast PJM footprint will likely have moderating loads and increased renewables generation. WSI Corp. in its Friday morning outlook said, “high pressure will promote fair and warm conditions across the power pool today through the weekend. High pressure is expected to weaken early next week. This may allow a storm system over the southern U.S. to move northward, while a cold front may sag southward. This will lead to increasing cloud cover, and increasing chance of light rain and a downward trend with temperatures.

“High pressure will generally support light and variable wind generation during the forecast period, though a couple of spikes in generation are possible during the next couple of nights. Output may top out in excess of 1 GW. Plentiful sunshine will support solar generation prospects through the weekend,” WSI predicted.