A second phase of fuel-saving requirements for medium- and heavy-duty vehicles (MHDV) will reduce diesel fuel use and will also discourage switching to natural gas and other alternative transportation fuels, according to a report released by the Energy Information Agency (EIA). 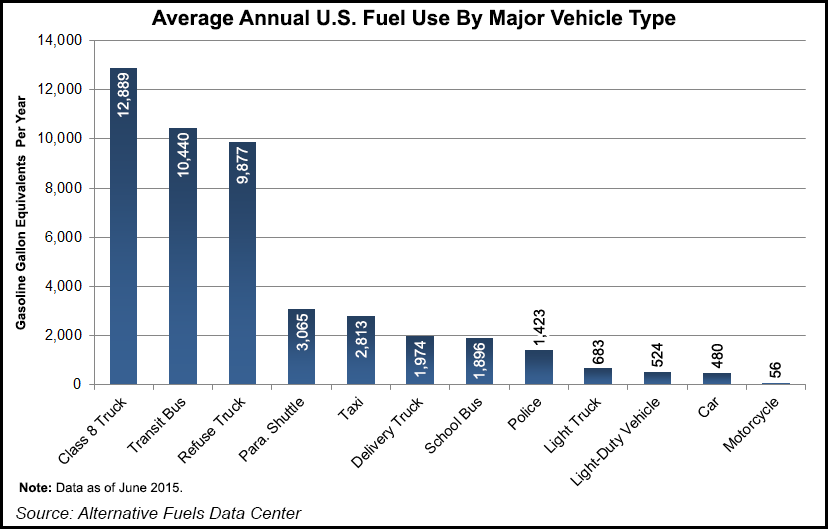 The conclusion comes in an EIA analysis of the proposed Phase 2 standards for the MHDV transportation sector that were issued jointly by the U.S. Environmental Protection Agency (EPA) and National Highway Traffic Safety Administration (NHTSA). Unlike light-duty vehicles, which have been subject to fuel economy standards since the 1970s, the MHDV sector was first subjected to fuel-saving requirements with the 2014 model year.

EIA has concluded that the proposed standards aimed at both more fuel economy and cutting greenhouse gas (GHG) emissions “would increase fuel economy and reduce diesel consumption in the MHDV vehicles.” The second phase requirements would not take effect until 2021.

Based on EIA’s analysis, the biggest impact from the proposed additional MHDV fuel requirements will be 18% less diesel use, or 500,000 b/d, in the sector by 2040. With more fuel economy in conventional vehicles, “there is less incentive to pay high capital costs for natural gas and propane vehicles, despite their lower fuel costs,” EIA said.

EIA sees the second phase standards for MHDV causing “a shift away from natural gas and propane toward conventional diesel and gasoline fuels.” That appears to be in conflict with the EPA/NHTSA goals for reducing GHG emissions, however.

An EIA spokesperson said the same factors are evident in the lighter-duty passenger car sector where fuel economy improvements serve as disincentives to converting to alternatives, such as hybrid-electric vehicles, not just natural gas vehicles. “We’re not picking on natural gas or any other alternative technology; we just updated our cost curves, and it comes down to an economic model and consumer choice,” the spokesperson said.

Cumulative carbon dioxide emissions from the 2021 to 2040 period of Phase 2 standards will be 1,200 million metric tons, or 3%, in the total transportation sector that overall accounts for 70% of the U.S. petroleum consumption, according to the EIA analysis.

EIA’s second phase standards case estimated fuel efficiency improvements and fuel consumption based on the proposed requirements for combination tractor-trailers, heavy-duty pickups and vans, and vocational vehicles. From model years 2017 to 2027, the EIA analysis indicated that the proposed standards will lead to adoption of technologies to improve fuel economy.

“Although the standards do not start until model year 2021, manufacturers are expected to begin adoption beforehand to ensure initial compliance,” EIA said.

The analysis of the proposed Phase 2 standards further shows diesel accounting for 90% of all fuel consumption in the MHDV segment in 2040, with the rest consisting primarily of gasoline and a small amount of natural gas.

“The higher diesel share in the Phase 2 standards case reflects a shift away from alternative fuels as improved fuel economy reduces the incentive to pay high capital costs for natural gas and propane vehicles despite their lower fuel costs,” EIA said.