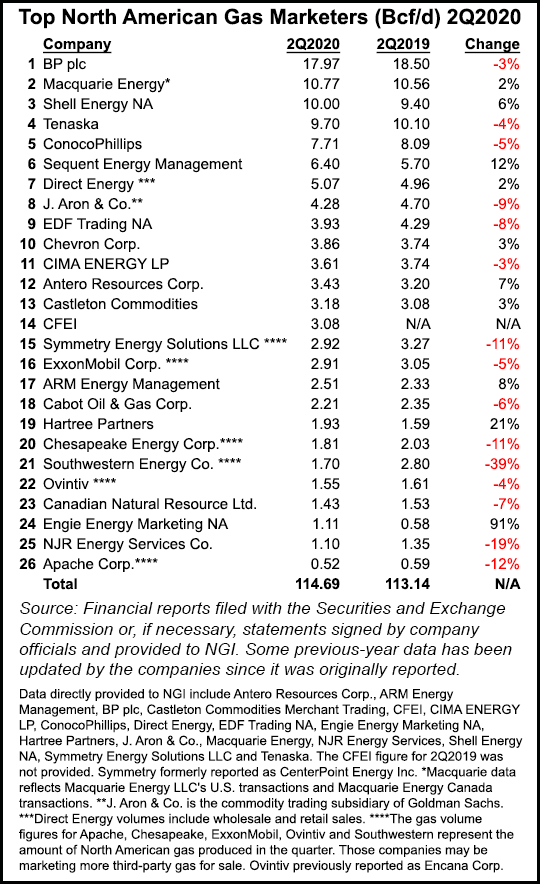 The 25 gas marketers covered in NGI‘s latest quarterly survey — with comparable year-earlier data available — reported combined sales transactions of 111.61 Bcf/d in 2Q2020, down from 113.14 Bcf/d in 2Q2019. The cloud of uncertainty and demand interruption imposed by the coronavirus pandemic weighed on second quarter marketer efforts.

Southwestern Energy Co. (down 39%) and NJR Energy Services Co. (down 19%) posted the steepest declines from a year earlier. The biggest gainers, meanwhile, were Engie Energy Marketing NA (up 91%) and Hartree Partners (up 21%.)

“Look for the year/year comparisons to be under even more pressures in the quarters ahead,” said NGI’s Patrick Rau, director of Strategy & Research. “Gas production steadily increased throughout 2019, but the massive decline in the rig count” continues to weigh on 2020. “Both those things will negatively impact quarter/quarter total marketer figures into 2021.”

Three of the total 26 companies in the 2Q2020 survey were not in the compilation a year ago. Also of note, CFEi returned to the survey in the second quarter, reporting 3.08 Bcf/d. CFEi, a marketing affiliate of Mexican state power company Comision Federal de Electricidad, did not provide data for 2Q2019, which skewed the year/year total comparisons for the 26 companies included in the 2Q2020 survey.

Looking at the 23 repeat companies, total marketer volumes were down 1.8% year/year. During the same period, U.S. dry gas production was off 1.1%, with drilling rig levels falling across the energy sector in 2020 as overall demand leveled off.

With the pandemic still permeating the United States and the pace of the domestic economic recovery uneven, the third quarter prospects are difficult to gauge. Besides the pandemic concerns, a wild hurricane season has led to issues on the Gulf Coast for oil and gas facilities. Seven of the 13 storms to form across the Atlantic in 2020 to date have hit the energy breadbasket, including hurricanes Hanna and Laura. In late August, Laura killed several people and caused billions of dollars in damage in Louisiana and Texas.

Denver-based BPX Energy, BP’s Lower 48-focused operations, reported its rig count fell from 13 in 1Q2020 to only one working in the Permian Basin at the end of June. During 1Q2020, BPX on average was running seven rigs in the Eagle Ford Shale, four in the Permian and two in the Haynesville Shale.

During the recent 2Q2020 earnings call, CFO Murray Auchincloss said “BPX remains core to the business,” even as the parent company evolves, and he suggested that production and sales could ramp up along with demand as the U.S. economy recovers from the worst of the pandemic.

Haynesville is a gas-weighted basin, while the Permian has massive associated gas as the No. 1 oil basin. The Permian and Eagle Ford are each solid sources of liquids.

Declines, however, were hardly across the board. Among those that reported increases was perennial No. 2 Macquarie Energy LLC (10.77 Bcf/d from 10.56 Bcf/d in 2Q2019). Shell Energy North America (10.0 Bcf/d from 9.4 Bcf/d) and Southern Company subsidiary Sequent Energy Management (6.4 Bcf/d from 5.7 Bcf/d) also reported meaningful increases.

Asset sales amid the pandemic’s fallout likely also factored into the overall decline in marketer volumes in the second quarter. For example, of the 23 companies that reported both in 2Q2020 and in 2Q2019, volumes were down 1.9 Bcf/d. Appalachian heavyweight Southwestern was down 1.1 Bcf/d by itself.

“Many of the companies in our survey are publicly traded producers, and we believe that sector has been under more pressure than their private brethren to ramp back capital spending to more maintenance levels,” Rau said.

The NGI survey ranks marketers on sales transactions only. FERC Form 552 tallies purchases and sales. According to the Federal Energy Regulatory Commission’s latest data and NGI calculations, the eight largest U.S. natural gas operators in terms over total volumes accounted for 25.5% of the market in 2019. That was down from 26.8% the year before, and well off the 33.0% total share in 2010.

“The top eight U.S. natural gas companies went from having one-third of the market to just a quarter in less than a decade,” Rau said. “That’s quite a change.”

Other notable takeaways from the NGI quarterly survey included the decline for Chesapeake Energy Corp. (1.81 Bcf/d from 2.03 Bcf/d in 2Q2019). Chesapeake was once the largest domestic gas producer but is now working through bankruptcy. The Oklahoma City-based independent in June filed for Chapter 11 protection to wipe out $7 billion in debt.  Houston-based Symmetry Energy Solutions LLC, which formerly reported as CenterPoint Energy Inc., declined to 2.92 Bcf/d in 2Q2020 from 3.27 Bcf/d a year earlier. CenterPoint completed the sale of its natural gas retail business, what is now Symmetry, to private equity firm Energy Capital Partners LLC in the second quarter.