Natural gas futures tumbled following the release of government storage figures showing a lower withdrawal than what the market was expecting. 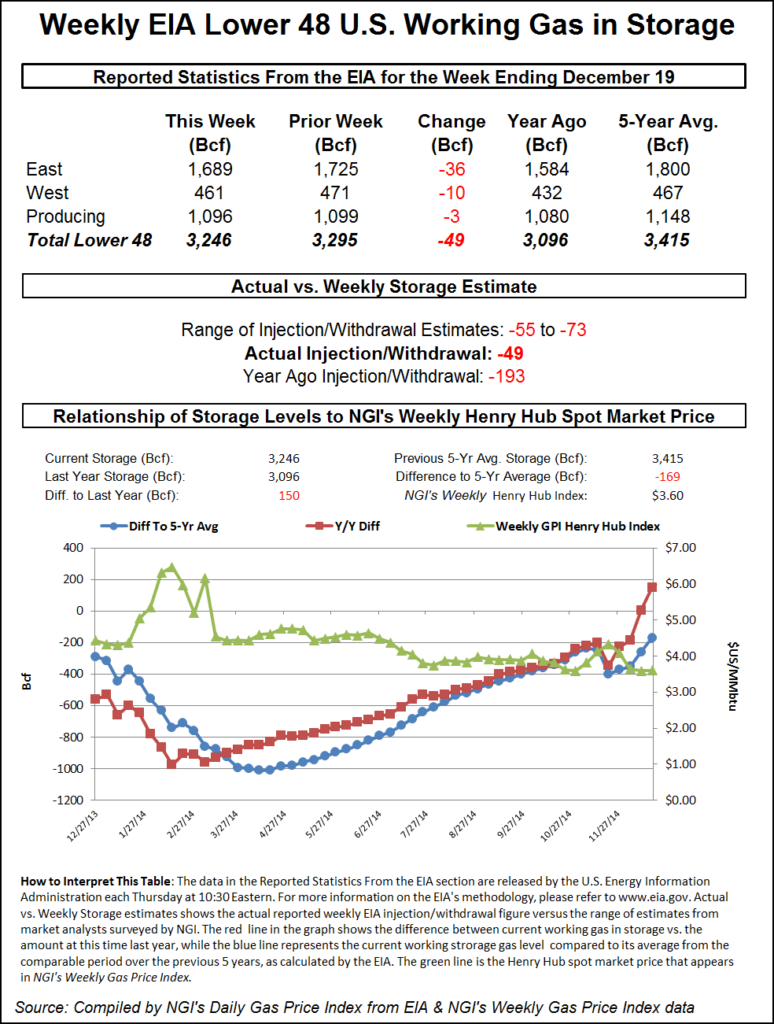 For the week ended Dec. 19, the Energy Information Administration (EIA) reported a decrease of 49 Bcf in its 12:00 p.m. EST release, about 11 Bcf less than estimates. January sank to a low of $3.003 after the number was released, and by 12:15 a.m. January was trading at $3.010, down 16.1 cents from Tuesday’s settlement. Up until the release of the number, the market held some degree of firmness as January was trading at $3.07.

“This was a clearly bearish report, with the 49 bcf net withdrawal well below the consensus expectation,” Evans said. “The report doesn’t provide specifics on changes in supply or demand, but with the population weighted degree days very similar to the prior week, we’d guess this implies a step up in natural gas production, with bearish implications for the weeks and months ahead.”

Inventories now stand at 3,246 Bcf and are 150 Bcf greater than last year and 169 Bcf below the five-year average. In the East Region, 36 Bcf was withdrawn and the West Region saw inventories decrease 10 Bcf. Stocks in the Producing Region fell by 3 Bcf.

The Producing region salt cavern storage figure added 2 Bcf from the previous week to 327 Bcf, while the non-salt cavern figure fell by 5 Bcf to 769 Bcf.

Mexico’s Energy Ministry (Sener) has ordered the unification of the Zama discovery offshore Mexico and has given Houston-based exploration and production company Talos Energy Inc. and Mexican state company Petróleos Mexicanos (Pemex) 120 days to come up with terms of how to carry out joint development of the field. In May, Mexico upstream regulator Comisión…