Tennessee Gas Pipeline LLC (TGP) is offering the state of Maine a 20-year capacity deal on its proposed Northeast Energy Direct (NED) expansion that it says will drive down Mainers’ natural gas and electricity costs. Meanwhile, Massachusetts has questioned the need for the project in a regulatory filing. 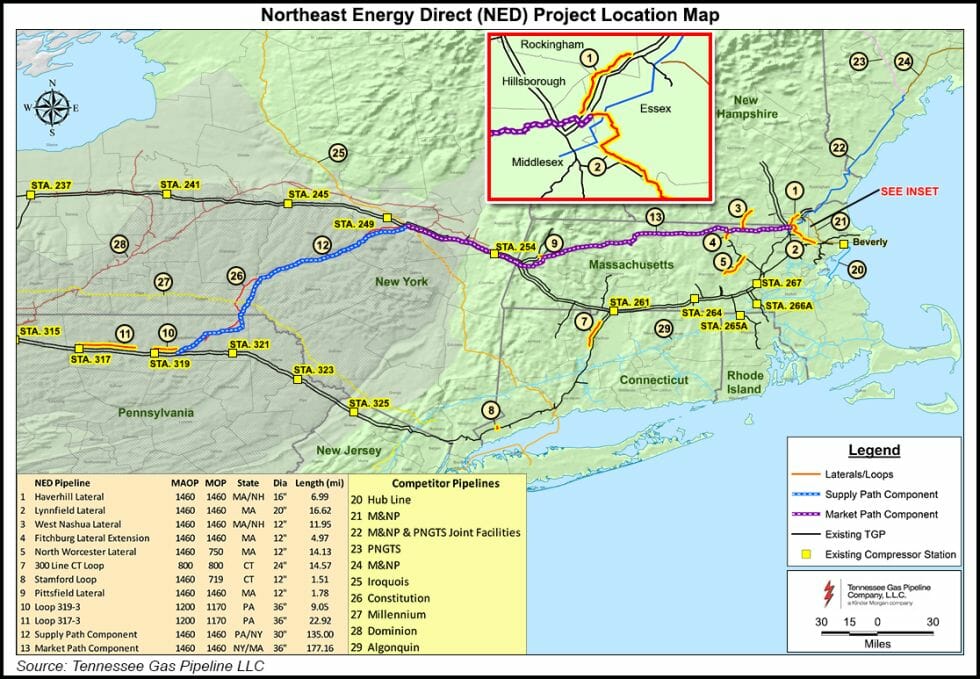 The offer from TGP to the Maine Public Utilities Commission (PUC) comes under the state’s Energy Cost Reduction Act (ECRA), which authorizes the PUC to acquire up to 200 MMcf/d of pipeline capacity for up to 20 years. The PUC has sought gas pipeline capacity proposals in an ongoing proceeding.

“We have offered Maine a set of agreements, quite standard in our industry, that provide for flexibility and, importantly, the avoidance of any costs to Maine before the pipeline is in operation and the benefits for Maine may be realized,” said Kimberly Watson, president of east region natural gas pipelines for TGP parent Kinder Morgan.

“Recent testimony and studies before the Maine Public Utilities Commission show that the savings of Maine electricity consumers would exceed the annual cost to Maine of the purchase of pipeline capacity.”

In announcing its pitch to Maine, TGP highlighted the capacity issues faced by New England and the consequent spikes in gas and power prices, particularly during the winter. Analyses by ISO-New England (ISO-NE) have shown that New England energy consumers are paying huge premiums for gas and electricity because of a lack of incremental gas pipeline capacity into New England from the south, TGP said. Last winter, New Englanders spent about $3 billion more for electricity than they would have if sufficient pipeline capacity had been available.

“TGP’s NED Project will provide the level of capacity necessary to significantly reduce basis differentials in New England and provide electric generation facilities in New England with access to firm pipeline capacity,” TGP said in the letter accompanying its offer to the Maine PUC. “Any proposal that consists merely of securing smaller incremental capacity is at best a tactical purchase at a time when Maine and New England require the strategic, transformative investment sought by the legislature to benefit energy consumers in Maine by reducing energy costs.”

The public versions of the proposal documents available from the PUC have been redacted, but the letter tells Maine that it won’t be on the hook for any costs “…until the NED Project is placed in service and the capacity is in place to reduce the basis differentials in New England and benefit Maine energy consumers.”

Meanwhile, the state of Massachusetts, is asking whether it needs additional capacity. One day after TGP filed at the Federal Energy Regulatory Commission, Massachusetts was the first to jump on the docket with a five-page filing outlining its environmental concerns and questioning whether the project is even needed.

“…[I]t is unclear whether Massachusetts needs additional infrastructure to meet [natural gas] demand, and if so, how much,” wrote Maeve Vallely Bartlett, state secretary of energy and environmental affairs [PF14-22]. Massachusetts is also curious about whether TGP thinks the state’s unmet gas demand is the result of “thermal needs,” power generation demand or both.

While there is interest in constructing one or more pipeline expansions to serve New England, including Massachusetts, the state told FERC it is taking the market’s temperature with its own thermometer. “Massachusetts is conducting its own study to determine whether additional infrastructure is required to meet projected demand, and how to account for environmental, reliability and cost considerations should new infrastructure be needed,” Bartlett wrote.

The state appears to be taking a “what’s in it for us” stance on the project, with Bartlett writing, “…[W]e are particularly concerned with whether the company is planning to serve customers outside the state or even New England.” Bartlett asked TGP to share “…any data available regarding regional demand for natural gas.”

A day before TGP had said in its filing that “the NED Project is being developed to meet the growing energy needs in the Northeast and, more specifically, the New England region. The New England region as a whole stands to benefit from the NED Project as it will enable New England to sustain its electric grid and lower energy costs to compete on a more level economic playing field with other regions of the nation with access to low-cost gas.

“As part of Tennessee’s fully integrated natural gas pipeline transportation system, the project will provide additional access to diverse supplies of natural gas to expansion customers in the New England region. As demand for natural gas in the region increases, Tennessee’s LDC customers have expressed the need for additional firm transportation capacity to serve their growing markets. In addition, multiple studies have concluded that additional pipeline infrastructure is needed in the region to serve increasing demand from LDCs and the power sector.”

NED would have capacity scalable from about 800,000 Dth/d to 1.2 Bcf/d, or ultimately up to 2.2 Bcf/d, depending upon final customer commitments, the pipeline said.

The project, as described by TGP in its filing this week, would consist of 167 miles of new and co-located pipeline and two pipeline looping segments on TGP’s 300 Line in Pennsylvania, and compression facilities designed to receive gas from the 300 Line for deliveries to the TGP system near Wright, NY; Iroquois Gas Transmission System LP; and/or the proposed Constitution Project.

The proposed Constitution Pipeline would be a 124.4-mile, 30-inch diameter line originating in Susquehanna County, PA, and terminating in Schoharie County, NY, where it would interconnect with the Iroquois and TGP systems (see Shale Daily, March 26; June 17, 2013).

NED also would entail 177 miles of new and co-located pipeline facilities extending from Wright, NY, to an interconnect with the joint facilities of Maritimes & Northeast Pipeline System and Portland Natural Gas Transmission System at Dracut, MA, and TGP’s 200 Line near Dracut. There would be eight new compressor stations, modifications to an existing station, as well as 73 miles of market delivery laterals and pipeline looping in Pennsylvania, New York, Massachusetts, Connecticut and New Hampshire.