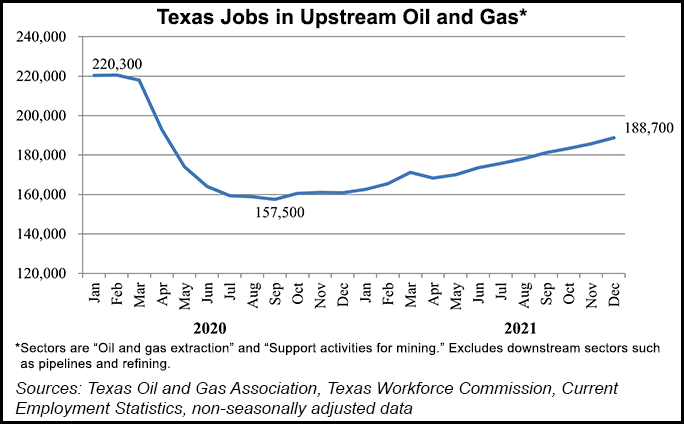 “Oil and natural gas employment continues to rebound, providing quality, high-paying jobs to Texans throughout the state, and we expect that trend to continue,” said President Ed Longanecker.

The Lone Star State’s upstream employment has now risen for eight months straight, said TIPRO, which tabulates job figures from the U.S. Bureau of Labor Statistics Current Employment Statistics report. According to the Texas Oil and Gas Association (TXOGA), that equates to an average monthly gain of 2,538 new jobs.

TIPRO noted that the state’s oil and gas services headcount has grown by 26,500 jobs year/year while the oil and gas extraction total is up 1,300 jobs for the period.

“These employment opportunities also span across a spectrum of occupations, from laborers and roustabouts to software developers and electrical engineers,” said Longanecker.

Where Is Demand The Greatest?

TIPRO said it continued to see strong job posting data in December for the state’s upstream, midstream, and downstream sectors. The trade association noted that it tracked 8,484 active unique oil and gas postings for the month, including 2,612 new job postings.

The organization, which further defines the state’s oil and gas industry within the bounds of 14 specific sectors, said support activities ranked highest in December with 2,144 unique job postings. Claiming the second and third positions were crude petroleum extraction (1,506 postings) and petroleum refineries (874).

Houston had the most number of unique oil and gas job postings in December with 3,041 listings, said TIPRO. Midland, the heart of the Permian Basin, and Dallas claimed the next two spots on the list with 939 and 531 postings, respectively.

In its ranking of the top companies by unique job postings, TIPRO said NOV Inc. took the lead with 477 listings, followed by Baker Hughes Co. (468) and Halliburton Co. (407).

“We believe increasing global demand will outpace production as economic conditions improve, and oil inventories could hit their lowest level in over two decades this summer, likely driving commodity prices higher and accelerating exploration and production activity in the state, if the market demands it,” said Longanecker.

Since bottoming out in September 2020, Texas’ upstream workforce has added 31,200 jobs, stated TXOGA.

The state’s strong labor market performance extends beyond the oil and gas industry, with one member of the Texas Workforce Commission (TWC) observing the state ended 2021 “with some fireworks” in terms of its overall monthly labor market statistics.