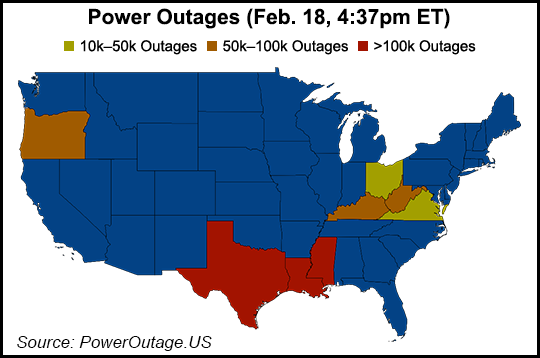 RRC Chairman Wayne Christian said the commission “adopted a ‘critical designation’ rule to ensure our natural gas supply is prepared for future energy emergencies…critical facilities including more than 19,000 of the state’s natural gas production facilities will be required to weatherize and be prepared to operate in future winter weather events.”

RRC has estimated the rulemaking would require compliance from about 6,200 operating companies.

Uri caused more than 30 GW of electric generation capacity to go offline and thousands of people to be in the dark during freezing temperatures for days. A July report from  the Texas Department of State Health Services attributed 210 deaths statewide to Uri. The event also prompted bankruptcies and lawsuits. The surge in gas demand during Uri led to an estimated $1.14 billion spike in costs for the state’s natural gas customers.

A recent report by the Federal Energy Regulatory Commission and the North America Electric Reliability Corp. and its six regional entities concluded that natural gas-fired power generators accounted for 58% of all unplanned outages, derates or failures to start during Uri.

The rules adopted by RRC on Tuesday “address the issue that some critical gas suppliers were not eligible for critical load designation and had their power cut off inadvertently” during the freeze, the RRC noted.

“Critical gas facilities are now able to, and required to, submit their information to electric utilities. Electric entities will use this information to plan load-shed procedures during an energy emergency.”

What Is Considered ‘Critical’?

The newly established designations are for:

RRC noted that inspectors recently have been visiting the state’s gas facilities and leases to observe winter preparation measures. It issued a notice to gas operators in October “to take all necessary measures to prepare for the upcoming winter.”

RRC noted that SB 3 includes language for some facilities to seek an exception from the critical designation. It also disputed media reports that companies may fill out an RRC form and pay a $150 fee to be exempted from the weatherization requirement.

“It has been wrongly reported that for $150 any company can be exempted from preparing for winter,” said Christian. “The $150 is a fee set in statute two decades ago for all applications for exceptions. It is just an application fee, not a get-out-of-jail free card. No company will automatically receive an exemption and applications can and will be denied.”

NGI confirmed that Section 81 of the Texas Natural Resources Code sets the application fee for an exception to an RRC rule at $150.

RRC said the newly adopted final rules prevent “certain types of highly critical facilities” from even qualifying to apply for an exception.

Commissioner Jim Wright said the rulemaking “strikes an appropriate balance to ensure those operators that are substantially contributing to the natural gas supply chain are identified and designated as critical while also recognizing the need for electric utilities to have flexibility during load shed events to ensure that electricity is available to the residents and families who need it.”

More action is forthcoming to help Texas’ energy supply withstand future events such as Uri, said RRC. The regulator said it is collaborating with the Public Utility Commission of Texas to map the state’s electricity supply chain and the natural gas infrastructure along that chain.

The Texas Oil and Gas Association (TXOGA) and the Texas Independent Producers and Royalty Owners Association (TIPRO) separately weighed in on the rulemaking.

TXOGA President Todd Staples said “most companies employ best practices including weatherization to keep product flowing and these measures are well underway to prepare for winter. Weatherization techniques vary based on factors such as well characteristics, production levels and location.”

“However, without power, no amount of weatherization is sufficient,” he added.

Mapping is a vital next step, Staples noted.

“Future rules regarding weatherization are required to be implemented by the RRC after the mapping process has been completed,” said Staples. “Mapping the power grid and improving the critical infrastructure identification process are key to determining which upstream assets should be winterized, and many operators already have these measures in place.”

In TXOGA’s favorable assessment of this week’s RRC rulemaking, Staples said the action would “ensure essential assets are designated as critical load and less-essential assets are not unnecessarily prioritized when there is not enough electricity in some emergency events.”

“This rulemaking and other substantive policy measures passed during the 87th Legislative Session will ensure that the state is better prepared for future extreme weather conditions, something the Texas oil and natural gas industry remains fully committed to,” said President Ed Longanecker.

Texas-based nonprofit Commission Shift, whose mission is to improve the RRC’s “function, transparency, and accountability” to those affected by the oil and gas industry, called the final critical designation rule “a good step.” However, the group said RRC “still hasn’t prepared Texas for this winter” and pointed out the importance of the pending map.

“Texans still await a map of the supply chain, required by the legislature, that won’t come out until 2022, followed by proposed weatherization rules from the Railroad Commission,” stated Commission Shift. “The changes incorporated into this new rule set up Texans more securely for the 2023-2024 winter and beyond.”

Executive director Virginia Palacios said the final rulemaking is a “real improvement from the draft proposal” and reflects significant public input during the comment period. “Over 900 people commented on the earlier draft rule,” which “address some of our top concerns…We applaud the public for participating in the critical infrastructure rulemaking and we encourage the Railroad Commission to do everything in its power to protect the gas supply chain so we don’t see deadly blackouts again this winter.”