The Texas oil and gas pipeline sector supported more than 238,000 high paying jobs and contributed more than $48.6 billion to the state in 2019, according to a Texas Tech University study. 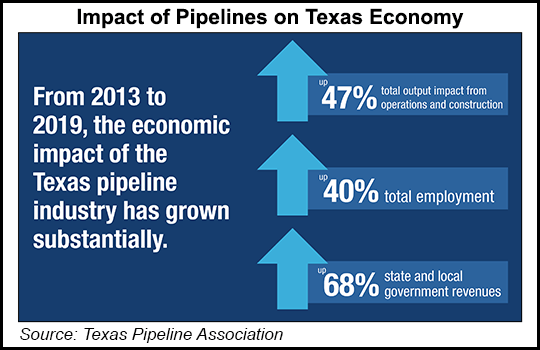 The report, by Tech’s Center for Energy Commerce at the Rawls College of Business, was commissioned by the Austin, TX-based Texas Pipeline Association (TPA) industry group. The authors found that the pipe systems contributed $29.3 billion to gross state product (GSP) and more than $2.7 billion to state and local government revenues.

Texas counties typically receive an estimated $12,350 in property taxes a year from pipelines in their respective jurisdictions from those government funds, said the report.

“Texas pipelines are an essential component of our energy infrastructure,” TPA president Thure Cannon said Tuesday. The pipeline systems “deliver the robust economic benefits that come from the continued growth and expansion of the oil and gas industry.”

Over the next 40 years, Texas pipelines are forecast to support more than 492,000 jobs and contribute more than $1.49 trillion to the state in 2020 dollars. In the 20-year period, the pipeline sector is expected to contribute $903 billion in GSP and $84 billion to state and local governments.

The study is an update from a 2014 study completed by Tech that estimated the impact of the pipeline industry in 2013 and 2024. With growth in the industry since then largely attributable to booming Permian Basin production in West Texas, the economic impact of pipelines has increased by 47% from 2013-2019, employment support by 40% and contributions to state and local governments by 68%, said the authors.

Pipeline mileage in Texas increased by 13.16% in 2019 from 2013, while the number of employees directly related to pipeline transportation grew by 2.68%, the study said.

The Texas rig count was 843 at the end of 2013 and 406 at the end of 2019, largely because of increased drilling efficiencies, the study said. The state’s rig count has dropped significantly this year with the economic devastation caused by the global Covid-19 pandemic, falling to 123 in the week ended Oct. 16.

Additional pipelines have been proposed to bring more Permian gas to the Gulf Coast. Such growth would be important to the state’s economy, said Rawls professor Bradley Ewing.

“Provided that the pipeline industry maintains effective transportation capabilities, it will continue to generate economic benefits that will likely impact Texas for years to come,” he said.