The monthly U.S. oil and gas permit count was nearly flat in September from August, with activity in the Eagle Ford Shale and some smaller Lower 48 plays offsetting declines in the Powder River and Permian basins, according to Evercore ISI. 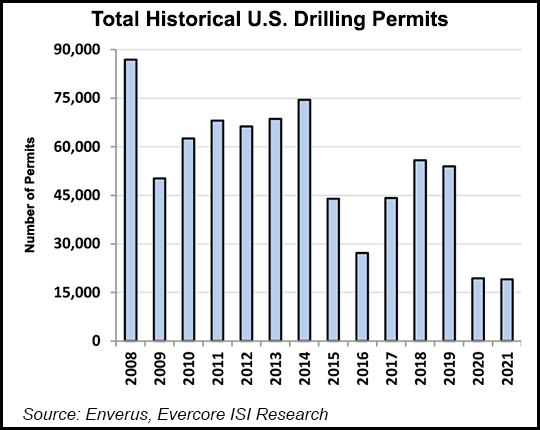 Each month the Evercore team compiles federal and state permitting data to note the trends in oil and natural gas activity. Permits usually are pulled a few months before development is underway in the onshore.

Wyoming’s permit requests appear to be stumbling, while Texas plays overall are in recovery mode. And in California, the number of oil and gas permit requests “continues rising,” West said.

Following a 31% decrease in requests during August, “signs of recovery were evident in Texas, with a 13% increase in permits,” a gain of 105 month/month (m/m).

There also was a 61% increase reported in California during September, with permits up by 114 m/m. Last month California “reached its highest count since July 2020, as the 2024 ban for drilling permits in the state inches toward its deadline,” West noted.

There was an average of 1,738 permits/month in Wyoming between 2018 and 2019, “although permits in the state declined precipitously in 2020, averaging only 81 permits per month,” analysts noted.

While permitting during July in Wyoming increased m/m by more than 1,500% to 673, the trend has been down since. According to Evercore, permitting in the state fell by 16% in August and another 27% in September, which had 152 fewer permits m/m.

Where Is E&P Activity Increasing?

Overall, the national permit count in September only recorded one more net permit than in August, but there were a “number of offsetting activity changes” in the Lower 48.

A 22% increase was seen m/m in smaller onshore plays, which recorded 139 more permits than in August. In addition, the Eagle Ford count was up 25% m/m with 44 new permits.

The gains, though, “were largely offset by declines in the Powder River Basin,” off 25% m/m or down by 124 permits. In the Permian, permit activity fell by 8%, with 58 fewer permit requests than in August.

Permits last month still were two times higher than in September 2020, “yet the figure is 31% lower when compared to September 2019 activity levels,” West noted.

Large-cap exploration and production (E&P) companies working the Permian, however, increased their permitting activity in September by 32% m/m. The increase was led by Pioneer Natural Resources Co., up by 22 permits or 60% higher m/m, and by EOG Resources Inc., which requested 19 more permits, a 117% gain.

Signs also point to a continued recovery in the job market for oilfield services (OFS) and the E&P sectors.

Meanwhile, Enverus Rig Analytics said as of Wednesday (Oct. 13), the domestic rig count was  up by 10 week/week to total 632. The U.S. count had reached a YTD high of 639 a few days earlier, it noted. The Baker Hughes Co. rig tallies are issued on Fridays.

According to Enverus, the “most active operators” in the Lower 48 were Pioneer with 24 rigs and EOG with 19. Mewbourne Oil Co. and Devon Energy Corp. were running 18 rigs each, while ConocoPhillips and Continental Resources Inc. each had 17 in action.