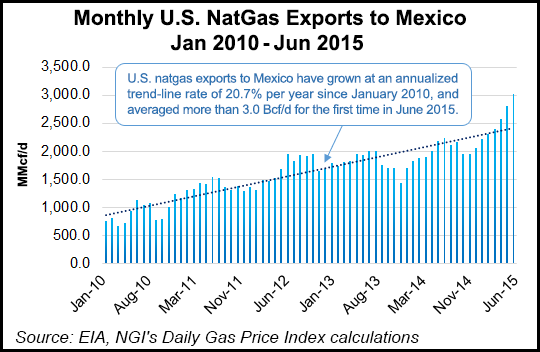 Roadrunner proposes to construct a border crossing in El Paso County, TX, that would consist of 900 feet of FERC-jurisdictional 30-inch diameter pipeline, installed beneath the Rio Grande River near San Elizario. The pipeline would transport natural gas to a new delivery interconnect with Tarahumara Pipeline S. de R.L. de C.V. at the border to serve expanding electric generation and industrial market needs in Mexico [CP15-161].

The border crossing is a part of the larger Roadrunner Gas Transmission pipeline project of Oneok Partners LP and a subsidiary of Fermacoa Infrastructure BV to transport up to 640 MMcf/d from the Permian Basin to Mexico (see Daily GPI, April 1).

Roadrunner’s new intrastate pipeline facilities, which include 205 miles of 30-inch-diameter pipeline, metering stations, and a new natural gas compressor station in Pecos County, TX, would be subject to the jurisdiction of the Railroad Commission of Texas and would be non-jurisdictional to the Federal Energy Regulatory Commission.

A number of Texas-Mexico pipeline projects have border-crossing facilities pending approval at FERC or that have already received approval. Opponents to pipeline development — particularly those opposed to the Trans-Pecos Pipeline in Texas — have told the Commission that the entire pipeline should be under federal jurisdiction, not just the border crossing (see Daily GPI, July 27).

Commission staff seemed to be anticipating a similar objection to the intrastate status of Roadrunner in its EA for the associated jurisdictional border crossing.

The Roadrunner intrastate would transport gas from a new compressor station near Coyanosa near the Waha Hub in Pecos County to the border facilities. Roadrunner would own and WesTex Transmission LLC would operate the new non-FERC jurisdictional pipeline laterals and looping, compressor station and metering station facilities that would interconnect to the border crossing pipeline.

U.S. natgas exports to Mexico have grown at an annualized trend-line rate of 20.7% per year since January 2010 and averaged more than 3.0 Bcf/d for the first time in June 2015.