The Texas Attorney General’s (AG) Office is expanding its investigation into the massive price spikes that occurred in the natural gas and power markets during the historic winter freeze last month, with the IntercontinentalExchange (ICE) ordered to turn over documents on pricing for the unprecedented week. 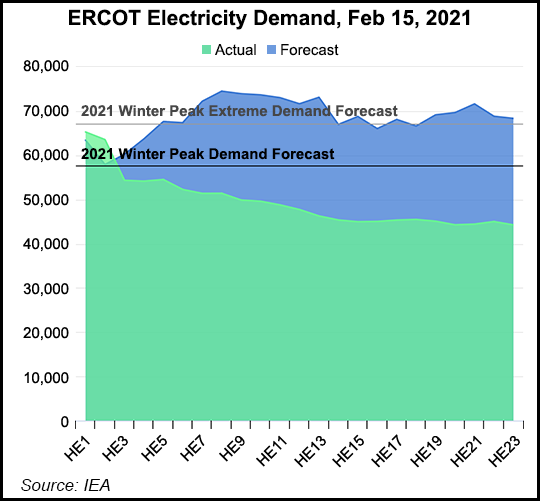 “These massive price increases impacted businesses and consumers alike and will have long-term effects on Texas,” said AG Ken Paxton. “Hardworking Texans who pulled together to get their communities through this disaster deserve transparency and justice.”

The civil investigative demand (CID) to ICE requires the exchange to provide documents that sufficiently identify the sellers and purchasers in all relevant trades during the period spanning from Feb. 8 through the delivery date of the CID.

Relevant trades are considered those in which the buyer or seller is either based in Texas or that supplies natural gas to Texas, according to the AG’s office. These trades include natural gas delivered through hubs based in Texas, including the Houston Ship Channel (HSC), Natural Gas Pipeline Co. of America and Banquete Hub.

HSC spot prices shot up to $400.000/MMBtu on Feb. 16 and remained sharply elevated for days as temperatures in the area plunged to the single digits.

The AG’s office also considers relevant trades based outside of Texas but that deliver gas into the state. These include Henry Hub, which hit a $23.605 high during the cold blast. Relevant trades include Same Day, Next Day, NxDay Intra and Balance of the Month gas trades. They do not include trades in gas futures or other nonphysical investing.

Late last month, Paxton also issued a CID to the grid operator for most of the state, the Electric Reliability Council of Texas (ERCOT). In addition, CIDs were issued to  11 power companies regarding the power outages, emergency plans and pricing related to the winter storm.

In addition to the CID issued to Griddy LLC, the AG also filed a lawsuit against the power retailer for violating the Texas Deceptive Trade Practices Act claiming “false, misleading and deceptive advertising and marketing practices.”

Griddy’s service plans include wholesale electricity pricing for customers, which during the week of the freeze surged to $9,000/MWh, or $9/KWh, and remained there for about four days. Customers also pay a $10 monthly membership fee, and bills incurred during the freeze reportedly were in the thousands. Griddy’s billing practice was to withdraw money from linked customer financial accounts as charges accrued.

ERCOT removed all of Griddy’s customers during the freeze last month and placed them with providers of last resort.

“Griddy misled Texans and signed them up for services which, in a time of crisis, resulted in individual Texans each losing thousands of dollars,” Paxton said. “As Texans struggled to survive this winter storm, Griddy made the suffering even worse as it debited outrageous amounts each day.”

In response to last month’s energy crisis, Texas House Speaker Dade Phelan on Monday announced seven priority bills to reform ERCOT. Among the proposals outlined, the House aims to reform leadership and restructure the board, replacing the unaffiliated members with members appointed by the governor, lieutenant governor and speaker of the House.

House Bill (HB) 10 would require all ERCOT board members to reside in the state, and it would create an additional board slot to represent consumer interests.

HB 14 as proposed would require the weatherization of natural gas infrastructure. It also calls for the Railroad Commission of Texas (RRC) to adopt rules requiring gas pipeline operators to implement measures that ensure service quality and reliability during an extreme weather emergency.

“We must take accountability, close critical gaps in our system, and prevent these breakdowns from ever happening again,” Phelan said.

Other bills aim to improve the state’s disaster alert system as well as improve coordination between ERCOT, PUCT, RRC and the Texas Division of Emergency Management. Proposals also would safeguard ratepayers and homeowners.

A separate bill filed by state Rep. Drew Darby earlier this month would alter the makeup of the PUCT, increasing the number of commissioners to five from three. HB 3025 would allow the speaker of the House and the lieutenant governor to participate in selecting two commissioners, with representation from each power region in Texas.

“By increasing the number of PUCT commissioners and spreading representation across geographic areas, including rural Texas, and load zones, we can bring more minds to the table to tackle major energy issues,” Darby said.

The prolonged cold snap in Texas brought to light the vulnerability of energy infrastructure across the state, and has had far-reaching consequences that have included federal investigations, bankruptcies and credit implications for several retail power providers. At the height of the winter storm, more than four million Texas homes and businesses were without power.