A Sentinel Midstream LLC subsidiary said Monday it has received a draft environmental impact statement (DEIS) for the deepwater crude oil export facility planned off the coast of Freeport, TX. 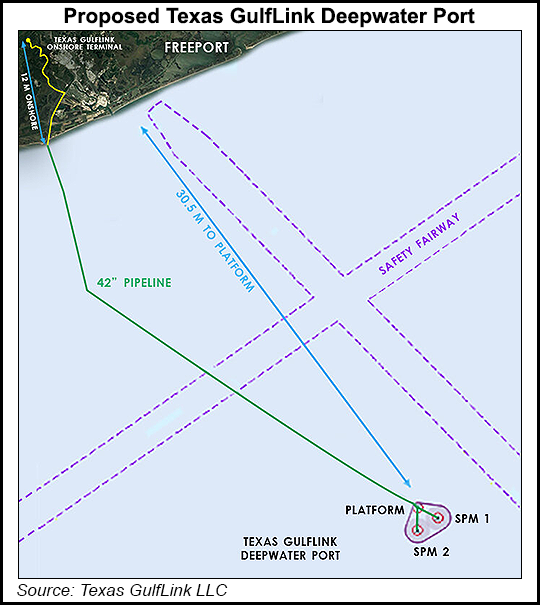 The U.S. Coast Guard and the U.S. Maritime Administration (MARAD) issued the DEIS for the Texas GulfLink project, a “critical step in the regulatory process toward receiving a license to operate the deepwater port,” which would be capable of fully loading very large crude carrier, or VLCC, tankers.

Texas GulfLink is to include an onshore oil storage terminal connected by a 42-inch diameter pipeline to a manned offshore platform about 30 miles off the Texas coast. From the platform, the crude would be transported to two single point mooring buoys to allow for VLCCs to receive up to 2 million bbl of oil with loading rates up to 85,000 bbl/hour. The offshore platform is to have around-the-clock monitoring.

Ballard noted the “challenging times” in the energy industry, but said Texas GulfLink would be positioned to benefit from the expected energy market recovery, as it would address the current VLCC loading limitations off the Texas coast by offering “a more safe, reliable, and economic crude oil movement solution.

“We believe Texas GulfLink is the infrastructure that is needed for the U.S. to link domestic crude oil supply with global markets, especially through chartered VLCCs bound for Asia,” he said.

Texas GulfLink also would allow for “more efficient” loading of VLCCs, according to the CEO. The platform is expected to “significantly reduce” overall emissions including carbon and other greenhouse gases by around 80% when compared to the cumulative effects of reverse lightering, which is the current ship-to-ship transfer practice off the Texas coast. Ballard said the facility also would reduce congestion in shore-based ports.

“All of these factors lead us to believe that Texas GulfLink will be a major step forward for U.S. crude oil exports and a driving factor toward a low-carbon emissions future.”

Richardson, TX-based Sentinel in January aligned with Asia market-focused Freepoint Commodities LLC to further the project, utilizing Freepoint’s global and commercial resources to create value for customers as it moves through the license application process.

After what was once a crowded field of offshore terminal prospects, Sentinel has one of the few remaining projects as momentum has waned over the past year, even before the Covid-19 pandemic struck the United States.

Enbridge Inc. in January dropped out of the race to build and operate a terminal that also would be offshore the Upper Texas coast. Enterprise Products Partners LP’s proposed Sea Port Oil Terminal, designed to load VLCC at rates of up to 2 million b/d, remained off the backlog as of the third quarter 2020.

Phillips 66 and Trafigura Group Pte Ltd. tied up in February to move forward with the Bluewater Texas Terminal LLC project. In recent months they told MARAD the project’s footprint would be reduced by relocating pumps and four storage tanks to the planned onshore multi-use terminal near Taft, in South Texas.

Phillips 66 also has a 25% stake in the South Texas Gateway terminals. The first dock and 5.1 million bbl of storage capacity have been commissioned, and the terminal began oil export operations in July.

Houston-based Axis Midstream Holdings LLC also has an South Texas oil export project on the table that would be sited on Harbor Island in Port Aransas, according to the U.S. Army Corps of Engineers. The project, however, has received substantial pushback by area residents as Port Aransas is a tourist and fishing mecca.