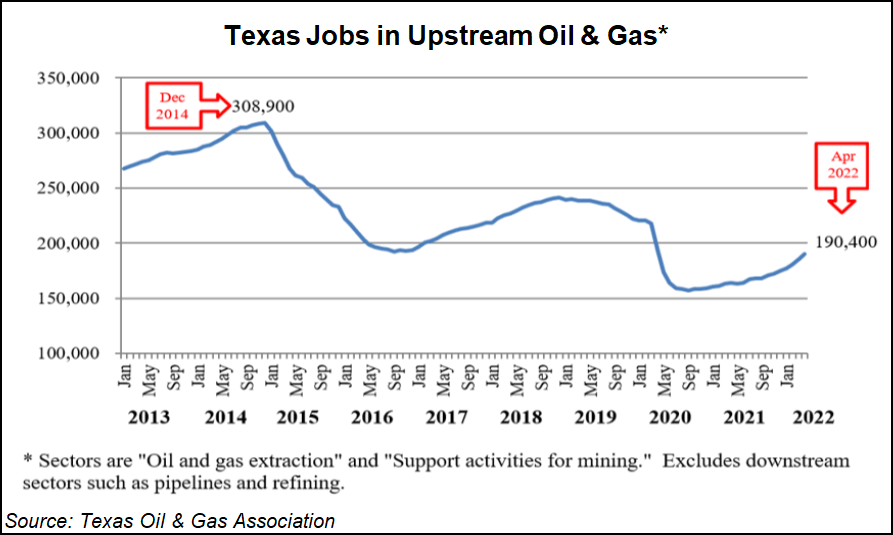 TIPRO said the April upstream workforce figure represents a year/year increase of 26,700 positions, including 4,300 in oil and gas extraction and 22,400 in oilfield services (OFS).

The trade group added the Houston region’s April upstream employment was up 7,700 jobs year/year, including a 3,300-position gain in extraction jobs and 4,400-job increase in OFS.

Statewide, TIPRO observed 11,313 active unique job postings in April in the upstream, midstream and downstream sectors of the oil and gas industry. The three top cities based on total job postings were Houston with 3,931 listings and Permian Basin hubs Midland (1,184) and Odessa (514).

TIPRO, which breaks down Texas’ oil and gas industry into 14 sectors, said support activities for oil and gas operations had the most unique job listings in April with 3,069 postings. Taking second place was crude petroleum extraction, with 1,510 postings, followed by oil and gas field machinery and equipment manufacturing with 1,069.

The most commonly listed industry occupation for April was heavy tractor-trailer truck drivers, with 474 postings, TIPRO said. Software quality assurance analysts and testers, with 258, and personal service managers, with 251, were second and third most popular job classes, respectively.

“These historic job numbers are a sign of strength and, when coupled with the rig count increase of about 58% from last year, are clear indicators of the commitment of the oil and natural gas industry to deliver Texas and American energy security,” said TXOGA’s President Todd Staples.

TIPRO obtains its employment data from the U.S. Bureau of Labor Statistics.