The explosion that rocked the Texas Eastern (Tetco) pipeline in Southwest Pennsylvania on Friday has cut about 1 Bcf/d of natural gas flows on the system, according to Genscape. 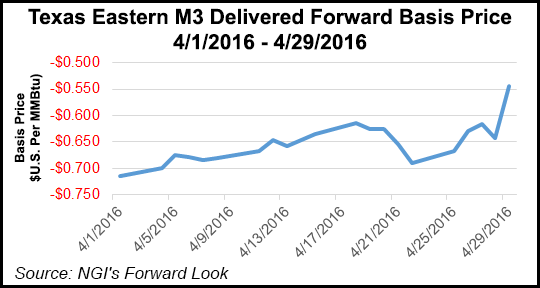 The blast and subsequent fire were reported Friday at about 8:30 a.m. EDT on Tetco’s Penn-Jersey Line in the M3 Zone, toppling trees, razing one house, damaging others and sending one resident to the hospital with severe burns (see Daily GPI, April 29).

Flows were immediately affected, pushing up M3 Deliveries basis by 9.8 cents in Friday trading from minus 64.3 cents to minus 54.5 cents for a 15.2% gain on the day, according to NGI data.

Flows beginning at the Delmont compressor — the western boundary of the M3 zone — have been cut to zero, with flows affected eastward, said Genscape, which tracks real-time data and intelligence for commodity and energy markets.

“The return of capacity through the Delmont compressor station remains unknown, but will remain at zero through May 3,” said Spectra Energy Corp. spokesman Creighton Welch, who added that flows through the affected section were 1.3 Bcf/d prior to the incident.

It’s unclear what caused the explosion, which occurred on a section of Tetco in Westmoreland County’s Salem Township, about 30 miles east of Pittsburgh. The fire was out by Friday afternoon. The Pipeline and Hazardous Materials Safety Administration took over the investigation from state regulators on Friday and sent an inspector to determine the cause of the failure.

Spectra, which owns Tetco, said it is actively working with federal regulators and said six of the nine evacuated families have returned to their homes. The explosion occurred in an area where four lines run parallel to one another. The rupture occurred on a 30-inch line, while the other 30-inch line, a 36-inch line and a 24-inch line were shut-off Friday to assess damage.

“It is uncertain how long the system will be down and/or affected, but we have reason to believe it will not be more than a week or two,” Genscape said. “First of all, there are parallel lines adjacent to the ruptured one that may be able to come back into service soon. Second, similar events on other pipelines in the United States and Canada have taken just a few days to repair.”

Flows through the Delmont compressor were shut off immediately after the explosion. Those averaged 1.07 Bcf/d in the five days prior to the incident, including a peak of 1.36 Bcf/d on April 27. Over the weekend, Tetco reported backward flows through Delmont of about 180 MMcf/d, Genscape said. All compressors east of Delmont and west of the Perulack compressor in Pennsylvania registered similar declines.

Genscape added that Tetco has also been compensating by reducing its deliveries to interstate interconnects. The largest declines, the firm said, are in deliveries to Algonquin at Lambertville, NJ, which have averaged 142 MMcf/d since the explosion, compared to 373 MMcf/d in the five days before the accident. Deliveries to Dominion at Perulack were down to 31 MMcf/d compared to 140 MMcf/d.

East of Perulack, where the Leidy line connects to the Penn-Jersey northern line, flows are also declining. Tetco has increased volumes flowing southward on Leidy by increasing its storage withdraws from about 100 MMcf/d to about 650 MMcf/d, Genscape added.

There are about six power plants that are captive to the system, but Genscape said those generators appear to be unaffected so far. Flows farther east have also been less affected, with Tetco increasing flows on its southern line.

Genscape said that if the other lines that weren’t ruptured on Friday are brought back online, then the system would have enough “flow capacity to satisfy downstream obligations based on recent nomination levels.” An ongoing force majeure is in effect along with a system-wide operational flow order (OFO) for all deliveries into the system, and there is an OFO for all deliveries and receipts in the M2 zone. Those are in effect until June 1 as the company assesses damage and how long it might take to repair.

“We are sensitive to our shippers’ responsibilities, and we can’t speak to how they are meeting their customers’ needs, but we are unaware of any downstream reliability issues due to our outage,” Welch said. “We are keeping shippers informed about the status of our return to service plan for the additional Texas Eastern lines that we have isolated out of an abundance of caution.”

When asked by NGI, some producers in the region said they had not yet been significantly impacted by the outage. Consol Energy Inc. spokesman Brian Aiello said the company’s Marcellus Shale volumes in Pennsylvania have been “impacted slightly,” but called the effects “very minor.” Range Resources Corp. spokesman Matt Pitzarella said the company’s production has not been affected by the incident.

Spectra said it has installed a silt fence to protect a nearby stream from any potential runoff, while state regulators have concluded air quality monitoring.

Spectra said it is conducting surface water testing, as well. The company also has a care team on the ground working closely with affected landowners, and an insurance adjuster is on site to help with property damage.