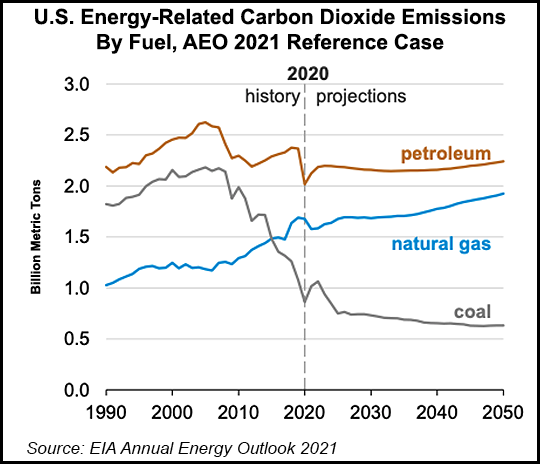 FERC ultimately voted to approve the two orders during its meeting. One was a proposal by Tuscarora to replace a unit at its Wadsworth Compressor Station in Nevada. The other was a 45,693 Dth/d expansion of NNG’s system in Minnesota.

Clements and Glick agreed that both projects were needed, but they argued that each decision merited a supplemental environmental impact statement “to examine the effect that the GHG emissions caused by the project will have on climate change.”

It initially seemed that neither order would garner the three votes needed to pass. Then Danly moved to add a single sentence to the orders, which he said were “legally infirm and…also just unfair” as drafted.

“The foregoing analysis of greenhouse gas emissions is offered for informational purposes only, does not inform any part of this order’s holding and shall not serve as precedent for any future certificate order,” the Danly amendment read.

Danly and Christie have held that any policy changes to FERC’s GHG emissions analysis should be made as part of the Notice of Inquiry (NOI) proceeding opened earlier this year to update the 1999 policy statement — and not as part of any individual project docket that has more limited participation.

On the other hand, in the wake of a 2017 federal court ruling that found FERC failed to properly consider GHG emissions in a review of a trio of natural gas pipelines, Democrats on the Commission have long argued for reform on the issue.

‘This Is Not A Game’

Glick, Chatterjee and Clements seemed to bristle at the manner in which Danly proposed his amendment, suggesting it should have been proposed in advance of the meeting.

“I want to point out that I think your motion is out of order,” Glick told Danly. “You did not provide a copy of the amendment. I didn’t know you were going to make the motion. I talked to you many times” prior to the meeting. “You didn’t mention it once. You didn’t share it with anyone.”

While the motion to amend clearly came as a surprise to the other commissioners, Danly defended the move on procedural grounds.

“This is a deliberative body, and the basic point of a deliberative body is to have an exchange of ideas and to come to a resolution on the items that are before us,” Danly said. “…The fact that we’re going to be discussing it is known to the public. And I want to point out that it used to be common practice back before the pre-prepared speeches and wooden performances of the Commission’s meetings that we have today, it was very common practice for orders to be edited in real time, for amendments to be made in real time during the meeting.”

Still, without expressing any major issues with the language of the amendment itself, Clements and Chatterjee, like Glick, seemed to take issue with the timing of its introduction.

“This is not a game,” Chatterjee said. “People are watching this. The markets are watching this. We’re toying with these companies. If this sentence is what it would have taken to have gotten us the three votes, it should have been offered before the meeting.

“…I’ve appreciated the back and forth and the debate. I can’t emphasize enough that these kinds of methods and tactics — look, I used to do them all the time in the United States Senate. This is different. This is a regulatory body. Our words matter, and our actions matter, and I’m very frustrated with how this all went down.”

Clements, for her part, said FERC’s compliance with its legal obligations under the National Environmental Policy Act is “too serious a matter to get caught up in this surprise amendment” that Danly proposed.

“I wish I believed that this amendment was made in good faith,” Clements said.

Christie said his priority was to move the projects forward and save the debate over GHG emissions policy for the NOI proceeding.

“There are five members who agree that these projects are needed, and let’s remind ourselves why: So people can heat their homes and not freeze in the winter, so people with gas stoves can cook, so people with gas hot water heaters can have hot water,” Christie said. “These are needed projects. It’s not a bureaucratic exercise. Real people need these projects, so we need to deliver as a Commission.”

He emphasized the NOI as the forum for hammering out any reforms to FERC’s GHG review policy.

The regulatory response to climate change could bring profound changes to how the agency chiefly responsible for overseeing the nation’s natural gas pipeline network carries out its business. The virtual format of last week’s debate, where the physical distance of the commissioners mirrored their apparent ideological separation, offered another subtle reminder that FERC finds itself in a new era.

For now, FERC’s stance on GHG emissions, and what it means for natural gas pipeline companies, remains a subject of uncertainty, according to analysts at ClearView Energy Partners LLC.

After reviewing the orders, the ClearView analysts said they were “perplexed as to why” Glick “initially indicated that the orders weren’t moving forward…or why” Danly “insisted on a real-time change.”

According to ClearView, “We still think that Commissioner Danly’s ‘motion to amend’ those certificates may result in more rather than less procedural delay for other pending certificate approvals, particularly those where opponents have criticized the FERC’s evaluation of GHGs.”

The ClearView analysts told clients following the meeting that they are “holding firm on our view that project approvals may slow” at FERC. “We may see few — if any — new certificate approvals in the near future; indeed, some projects may have to wait until the Commission’s broader review of its Certificate Policy Statement is complete.”

After the Tuscarora and NNG orders had passed and as last week’s meeting drew to a close, Glick once more stated his disapproval of Danly’s tactic. That initiated another exchange between two commissioners who have had their fair share of disagreements on the record.

“I don’t think we should be engaging in deception,” Glick said. “We need to be up front with our colleagues about what we intend to do. I intend to work with my colleagues to smooth the road a little bit to see if we can move forward in a better manner, but I think today was unacceptable.”

“The implicature of the chairman’s comments…are that I was deceptive in bringing this to the floor, and I want to rebut that….There can be no deception involved when an amendment is offered in the full light of day in a meeting that is on the record that I am submitting for the consideration of my colleagues,” Danly said.

“Any of the internal dialogue and discussion that occurs behind closed doors, that the public has no view on, those are not always done with the good will that one might hope. And sometimes what you have to do is insist that the open meeting be the forum that the actual discussion occurs,” the commissioner added. “So I regret the fact that I had to do this, but I did. I did have to.”