Houston-based FMC Technologies Inc., a technology innovator in the subsea and on land, on Thursday agreed to merge with Paris-based Technip, an energy engineering and construction giant, in a transaction valued at $13 billion. 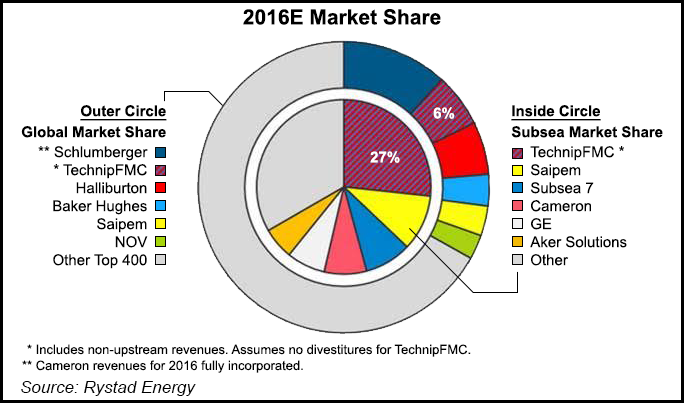 The tie-up, said the partners, would create a “leader in subsea, surface and onshore/offshore, driven by technology and innovation.” The combined company, to be renamed TechnipFMC, had combined 2015 revenue of $20 billion and a $20 billion backlog at the end of March.

The transaction would combine the two workforces and bring together more than 49,000 people, building on an existing alliance and joint venture created last year, Forsys Subsea (see Daily GPI, July 6, 2015). Technip now employs 32,500 people and operates in 45 countries, while FMC, which employs 16,500, operates 29 production facilities and services bases in 18 countries.

“Our alliance has shown that as customers evaluate solutions, they are involving us in the process earlier and to a greater degree than ever before,” said FMC COO Doug Pferdehirt, who is to serve as the new CEO. “The more they seek our recommendations and new products, the more we differentiate ourselves from the competition. This transaction will allow us to deliver even greater benefits to our customers through a broadened portfolio that provides a unique set of integrated technologies and competencies that are underpinned by a history of developing rich partnerships and creating customer success.”

An analysis by Rystad Energy issued Thursday showed that TechnipFMC would have an expected revenue of about $17 billion in 2016.

“Within the subsea space, it will control roughly 27% of the market,” able to supply “complete subsea production systems” and life-of-field services, Rystad analysts said. By comparison, Baker Hughes had revenue in 2015 of $15.7 billion and reported 1Q2016 revenue of $2.7 billion. Halliburton reported 2015 revenue of $23.6 billion, with 1Q2016 revenue of $4.2 billion.

Considered an underwater specialist, FMC would be able to “look beyond subsea,” Pferdehirt said during a conference call Thursday. “We will take the same capability, the same competency that we are now being able to demonstrate to our customers, and we can take that to surface or, if you will, onshore. Our ability to do that by leveraging the capabilities of the broader company, the surface technologies of FMC Technologies and the onshore/offshore technologies, and knowledge and project management from Technip will allow TechnipFMC to have a unique offering on land as well as in subsea.”

Technip CEO Thierry Pilenko, who is to chair the merged company, told analysts that the merger would improve project execution.

“What we’ll be able to do now by completely redesigning the equipment to take into consideration installability creates a unique set of opportunities that…as we come together as one company, we’ll be able to recognize things that would change the installation process or change the fundamental way that our equipment is designed would be difficult to do if you weren’t look at it from a holistic opportunity.”

The energy infrastructure business offers measurement solutions designs products and systems used to measure and control the flow of liquids and gases. It also offers loading systems to transfer petroleum, liquefied natural gas and chemicals products, as well as systems to separate oil, gas, sand and water in surface, subsea and topside applications.

Technip’s project management services also are weighted to the subsea, with field architecture and integrated designs its forte. For the onshore/offshore market, the operator provides engineering, procurement and construction services, as well as technology and project management.

The market is “challenging,” but during downtimes there are big opportunities, FMC CEO John Gremp said during the call. FMC had announced earlier this month that Pferdehirt was taking over as FMC CEO in September with Gremp’s retirement.

The idea is to “engage with customers earlier in the development process to design, deliver and install more comprehensive solutions, redefining the production and transformation of hydrocarbons,” Pilenko said.

The combined company expects to achieve pretax cost synergies of $200 million in 2018 and “at least” $400 million in 2019 and thereafter. The cost synergies primarily would come from supply chain efficiencies, real estate, infrastructure optimization and other corporate/organizational efficiencies. In addition, revenue synergies are expected to be achieved from the integrated subsea project execution model.

Pilenko addressed concerns about potential antitrust issues, something that led Halliburton and Baker Hughes to call off their mega-merger (see Shale Daily, May 2).

“Obviously, we have to go through the normal process of antitrust filing and so forth,” Pilenko said. “But…we are not competitors, we are very, very complementary, and that’s true. I mean, we see it every day when we prepare bids for customers in the subsea space…It takes time to go through this filing, but clearly, we don’t see a problem.”

The board would consist of seven members designated by FMC, including Pferdehirt, and seven designated by Technip, including Pilenko. The heads of the business units “have been identified and will be communicated in due course along with the other senior functional and operational executives of the company,” executives said.

Operational headquarters would be in Paris, overseen by Pilenko, while Pferdehirt would helm the business from Houston. The new corporation would be domiciled in London, where Forsys Subsea is headquartered. The global Integrated Research and Development center would be in France. Once the merger is completed, TechnipFMC shares would trade on the New York Stock Exchange and on the Paris Euronext Stock Exchange.