Speculators with net short positions set the stage for a natural gas price rally on Wednesday as the September Nymex futures contract rolled off the board, with a drop in production solidifying the momentum. September surged as high as $2.277/MMBtu before going on to expire at $2.251, up 4.9 cents on the day. October, which takes over the prompt position on Thursday, rose 3.0 cents to $2.222. 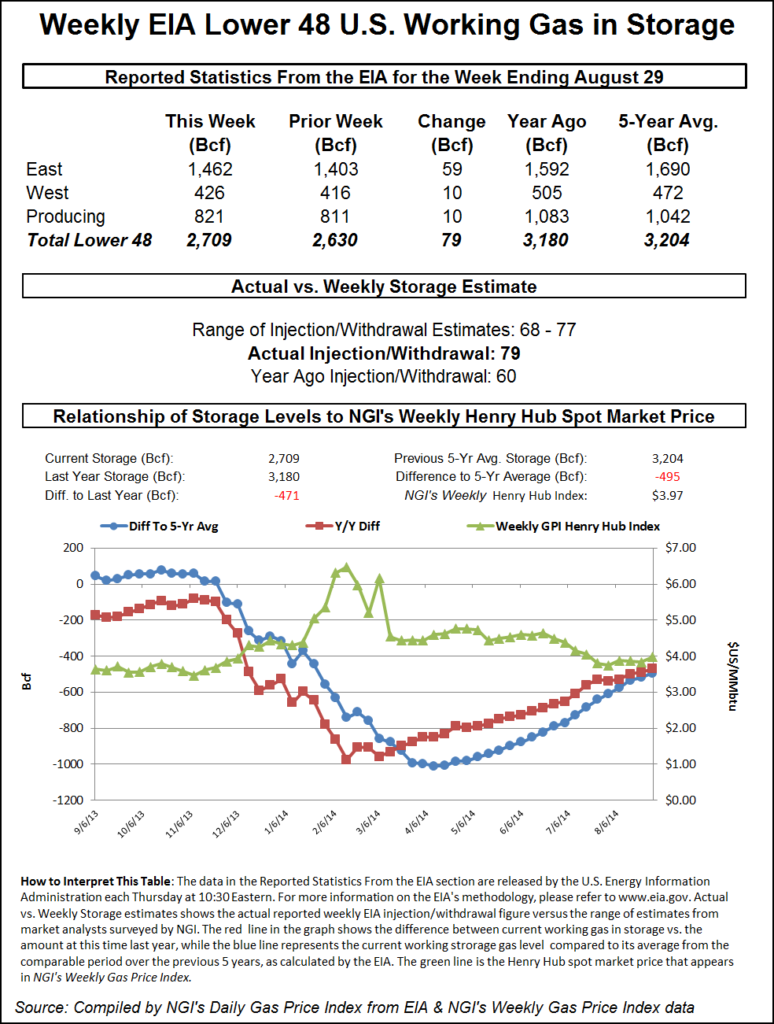 Spot gas prices were stronger across most of the United States, outside of California. Single-digit increases were the norm, but the Midcontinent and West Texas posted much larger gains day/day. The NGI Spot Gas National Avg. rose 5.0 cents to $2.030.

Erratic trading is common during bidweek, and Wednesday was no exception even with light demand across much of the country. The September futures contract opened the session nearly flat day/day but quickly started climbing despite little change in overall weather forecasts, which continue to show generally moderate national demand through the first third of the month.

Bespoke Weather Services pointed to the contract expiration for the swift price swing, as well as “tough technical resistance” being challenged. “Longer term, we like upside price risks, though would not be surprised to chop around more in the near term.”

Lower production on Wednesday also likely aided in the rally. After revisions to Tuesday’s data, production was ultimately about 1.2 Bcf lower day/day, according to Bespoke. Wednesday’s output started out a little lower than Tuesday’s starting point.

In addition, federal regulators on Wednesday gave the all-clear for Cheniere Energy Inc. to begin commercial operations from the second production unit at its Corpus Christi export terminal. Feed gas deliveries to the Texas facility had reached a record high over the last week or so after achieving first production in July. A third train is scheduled for completion in the second half of 2021.

While Wednesday’s price action was more technical in nature, if October prices hold above $2.20, that could give bulls fresh life for another push higher, according to NatGasWeather. However, Thursday’s Energy Information Administration (EIA) storage inventory data could add another layer of complexity if the reported injection surprises.

A Bloomberg survey of 13 analysts called for an injection between 45 Bcf to 61 Bcf, with a median of 56 Bcf. Intercontinental Exchange settled at a 60 Bcf injection, while NGI projected a 51 Bcf build.

Last year, the EIA reported a 66 Bcf injection for the similar week, while the five-year average injection stands at 57 Bcf.

Mobius Risk Group noted that the reference week (ending Aug. 23) was the second hottest of the summer, and in stark contrast to the current forward forecasts, which depict mild conditions across the eastern half of the country. “It will be interesting to see whether temperature forecasts or the actual EIA number is in the driver’s seat for the remainder of the week.”

Looking ahead to September, the Labor Day holiday, easing Texas heat and renewed flows on the Texas Eastern Transmission (Tetco) pipeline could quickly put the kibosh on bulls’ hopes that exports to Mexico and strong LNG demand would be enough for a lasting rally, according to EBW Analytics Group.

Meanwhile, hurricane risk remains elevated for the next month. Forecasters are keeping a close eye on Tropical Storm Dorian, which has shifted slightly further north. The storm is expected to be right off the eastern Florida coast this weekend, but becoming less likely to track into the Gulf of Mexico.

“The latest guidance was a little stronger and increases the cyclone to hurricane strength prior to impacting Florida and the Southeast U.S. Atlantic Coast Sunday-Monday,” NatGasWeather said. “But again, impacts are likely to be more bearish than bullish” due to the projected loss of demand from cloud coverage weighing more heavily than any loss of production.

Temperatures across most areas of the United States remain quite comfortable, but blazing conditions out West and across Texas continue to drive up demand and prices. Records dating back to the 1940s are expected to be challenged as intense heat builds into the Labor Day holiday, according to AccuWeather.

“California, the Great Basin, Desert Southwest and Intermountain West region will be hot and mainly dry into this weekend, with many areas having temperatures as much as 4-14 degrees Fahrenheit above normal,” AccuWeather senior meteorologist Jack Boston said.

The core of the heat is forecast to expand northward during the first few days of September, with Denver seeing the greatest chance for record-breaking temperatures on Sunday and Monday. Other areas of the Rockies are also expected to test records around this time, according to AccuWeather.

With highs expected to remain in the mid- to upper 90s across much of Texas for at least the next 10 days, demand remains high in the Lone Star State as well. However, a cool front was pushing into northern Texas and portions of the South with highs easing into the 80s, according to NatGasWeather.

Prices were up to 10 cents higher across East Texas, while West Texas points jumped around 40 cents or so at several pricing hubs. El Paso Permian was up 38 cents to $1.205.

The strength comes despite the start of a three-day emergency shutdown test that began Wednesday and sent regional prices plunging on Tuesday. In addition, EPNG has continued to restrict flows to zero at its “CRANEWNK” throughput meter in Ward County, TX, after discovering a faulty weld on its Line 2000 on Tuesday.

Effective through Aug. 29, this flow reduction acts as a continuation of EPNG’s Permian Basin Expansion maintenance. CRANEWNK had flowed an average of 86 MMcf/d in the 30 days preceding this maintenance, according to Genscape Inc.

In California, prices retreated a bit after posting sharp gains over the last two days due to strong demand. SoCal Border Avg. tumbled 37 cents to $3.01, which is still well above the $1.935 level that prices were at to start the week.

Southwest prices also plunged despite the ongoing EPNG maintenance that had boosted prices on Tuesday.

Over in the Rockies, however, the pipeline work continued to boost Transwestern San Juan, which climbed another 10.5 cents to average $2.06.

Similar increases were seen across the Midcontinent, while gains were capped at less than a dime across the Southeast, Appalachia and the Northeast.