Natural gas futures softened on Friday after surpassing the $6.500/MMBtu mark early in the trading session. With technical pressure amplified given the lack of demand response to the higher price environment, overbought conditions sent the May Nymex futures contract down 8.1 cents to $6.278. June futures fell 8.0 cents to $6.356. 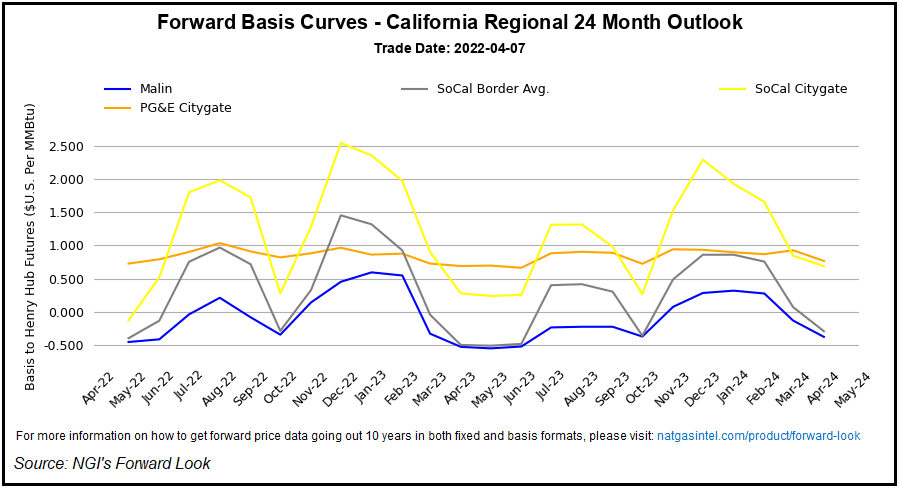 Spot gas prices were mixed to close out the week, with NGI’s Spot Gas National Avg. climbing 9.5 cents to $5.995.

Coming off more than a 30.0-cent increase on Thursday, it’s not a complete surprise that futures tapped the brakes a bit heading into the weekend. While weather models converged in showing a slightly cooler-than-normal weather pattern through the latter part of April, production took a step higher.

NatGasWeather said most data favors a return to lighter demand for the April 22-25 period, but with some risk of cooler trends in time. Most important, though, the coming pattern should bring enough demand to prevent current deficits near 300 Bcf from improving through the end of the month. This shortens the window to make up ground ahead of summer heat, according to the forecaster.

“This will keep the background state relatively bullish and has led to seasonal buying with the expectation U.S. supply deficits will increase over the summer,” NatGasWeather said. “The only way we see the supply scenario improving in the months ahead would be if U.S. production notably increases soon.”

The forecaster said the potential exists for a significant boost in output. NatGasWeather pointed to the latest data from Baker Hughes Co., which showed a 16-rig increase in oil and gas rigs for the week ending Friday (April 8).

Still, the uphill climb is steep to replenish inventories this summer. Traders on Friday were still digesting the latest storage figures from the Energy Information Administration (EIA). The agency reported a larger-than-expected 33 Bcf drawdown in stocks for the week ending April 1. The decline capped a withdrawal season in which a cumulative 2.2 Tcf was taken out of storage to meet winter demand, particularly since the turn of the year.

Mobius Risk Group pointed out, however, that with a population-weighted heating degree day total of 3,552, this winter ranked as the eighth warmest in the past 72 years. Assuming weather-adjusted supply/demand (S&D) would have held constant on normal weather, the cumulative storage withdrawal could have been slightly more than 2.5 Tcf.

“The prospects of a 2.5 Tcf withdrawal next winter, assuming weather normal and flat year/year S&D, are a large part of the recent run-up in near-term pricing,” Mobius said. “With a sub-1.4 Tcf start to injection season, and most market expectations calling for a sub-2 Tcf storage build, next winter is tracking to begin with less than 3.5 Tcf in the ground.”

Unless there is a combination of surging production growth, and/or a string of hurricane-inducing liquefied natural gas (LNG) export limitations, the summer injection season could be one for the record books in terms of pricing during the shale era, according to Mobius. “We simply do not have enough Btus domestically, and this is a truth for most major economies globally.”

Renewable power generation could step in to temporarily mask the shortage of molecules this spring, Mobius said. “Mother Nature and her whims regarding the delivery of elevated wind speed, sparse cloud cover and eastern U.S. rainfall are factors which could impact summer pricing notably. However, these risks are currently being offset by an early spring weather forecast which is keeping heating demand at the forefront through mid-April.”

Meanwhile, prices could remain higher for much longer. In note to clients on Friday, a Goldman Sachs analyst team led by Samantha Dart said news that the United States would send an additional 15 billion cubic meters to Europe this year grabbed headlines. However, this incremental flow could be easily achieved.

“U.S. LNG exports to the region have already been so high year to date that volumes could be cut in half for the remainder of the year and still meet that target,” the Goldman analysts said.

More relevant, according to the Goldman team, is the impact of Europe’s efforts to reduce its dependency on Russian energy supply. The analysts see a potential to boost U.S. liquefaction capacity by 3-5 Bcf/d beyond their baseline assumptions.

That baseline now includes a gradual debottlenecking at Cameron’s existing trains, which would add 4.5 million metric tons/year (mmty) by 2025. It also includes one module (1.4 mmty) coming into service at the New Fortress Energy Inc.’s Fast LNG project. The project was sanctioned last year and could begin service in 2023.

Like futures, spot gas prices have experienced the upside recently, and Friday was no different. Even though prices historically have fallen ahead of the weekend, cash bounced back swiftly from Thursday’s decline.

Gains were most substantial in the eastern half of the country, where Cove Point gas shot up 31.0 cents to average $6.320 for the three-day gas delivery through Monday. Transco-Leidy Line picked up 19.5 cents to reach $5.845, while Algonquin Citygate tacked on 19.5 cents to hit $6.085.

Prices also were mostly lower on the West Coast, despite the potential for more record-setting heat. The National Weather Service said daytime temperatures were forecast to remain 20-25 degrees above normal on Friday, reaching the 90s across much of California. Earlier in the week, fresh highs were achieved in Anaheim, Burbank and a host of other cities in the Golden State.