An oil leak in Kansas detected Wednesday evening prompted TC Energy Corp. to shut down its 600,000 b/d Keystone Pipeline, which transports Canadian crude south to the Midwest and Gulf of Mexico. 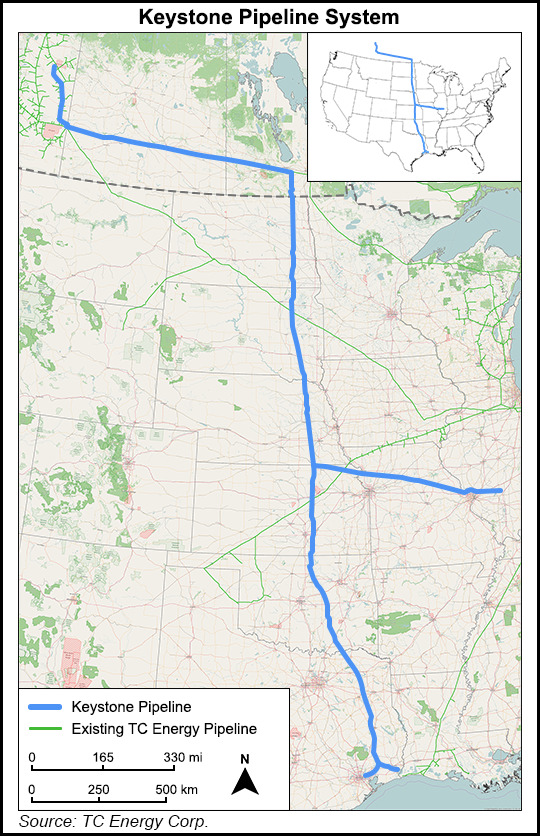 “The affected segment has been isolated, and booms deployed to control downstream migration of the release,” TC officials stated Thursday. “The system remains shut down as our crews actively respond and work to contain and recover the oil.”

The Calgary-based company was “proceeding to make appropriate notifications, including to our customers and regulators, and will work cooperatively with third parties to effectively respond to this incident.

“Our primary focus right now is the health and safety of onsite staff and personnel, the surrounding community, and mitigating risk to the environment through the deployment of booms downstream as we work to contain and prevent further migration of the release.”

An unknown amount of oil flowed into a creek about 20 miles south of Steele City, NE, near the Kansas-Nebraska border, where the 2,151-mile system splits into an eastbound route to Illinois and a southern leg to Oklahoma and the coast.

Keystone began delivering Alberta crude in 2010. It was set to expand the system via the Keystone XL project. However, the Obama and Biden administrations separately rejected the proposal.

President Biden on his first day of office in January 2021, announced he would scrap the presidential permit granted by the Trump administration, which would have allowed XL to begin construction.

The president said at the time that the XL system “disserves the U.S. national interest” because the “United States and the world face a climate crisis.” Leaving the permit in place “would not be consistent with the administration’s economic and climate imperatives.”

Following a slew of legal battles, TC in June 2021 canceled the XL expansion. The XL decision did not impact the original Keystone Pipeline.