After a nearly three-year battle with the state of Maryland, TC Energy, formerly TransCanada Corp., is taking the legal route to gain access to a small stretch of land it said it needs to complete a pipeline project that would deliver natural gas to West Virginia’s eastern panhandle. 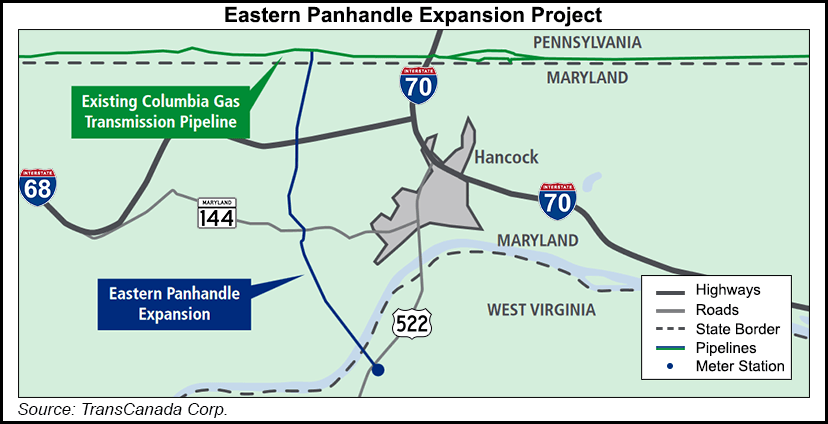 Last week, TC Energy filed a condemnation proceeding against the state and is requesting a preliminary injunction to receive immediate access to the easement Maryland’s Board of Public Works denied in a 3-0 vote in January.

The easement is part of the planned Eastern Panhandle Expansion (EPE) project, which is only three and a half miles long and eight inches in diameter, but it would provide additional supplies to Mountaineer Gas Co., the local natural gas distribution company in the area.

The pipeline would run from interconnections with Columbia Gas Transmission’s lines 1804 and 10240 in Fulton County, PA, and extend through Washington County, MD, to a point of delivery with Mountaineer, the project shipper, in Morgan County, WV. The project would provide up to 47,500 Dth/d of incremental firm transportation service to markets in West Virginia, in addition to serving communities by increasing supply options. The pipeline is scheduled to be in service by July 2020.

“This is very unfortunate, but we have exhausted all other reasonable options and are committed to completing this project in a timely fashion to deliver for Mountaineer Gas Co. and their customers,” TC Energy spokesman Scott Castleman said. “This project is critical to the continued development and economic prosperity of West Virginia’s Eastern Panhandle and the surrounding region.”

EPE has received all the necessary permits to begin construction. In addition, it has reached agreements with all private landowners, and easements have been acquired without the use of condemnation. Nevertheless, environmental groups and more than 60 state authorities have opposed the project.

“These regulators confirmed that through proper design and construction, our project can be completed in an environmentally responsible and safe manner, and we are committed to doing just that,” Castleman said.

EPE would run 102 feet under state property, of which 20 linear feet would travel under the Western Maryland Rail Trail, at a depth of more than 100 feet below the surface, according to TC Energy.

“At no point during construction is our work expected to disrupt use of the Western Maryland Rail Trail, as we will be tunneling more than 100 feet below the trail surface. All recreational use will be allowed to continue as normal,” Castleman said.