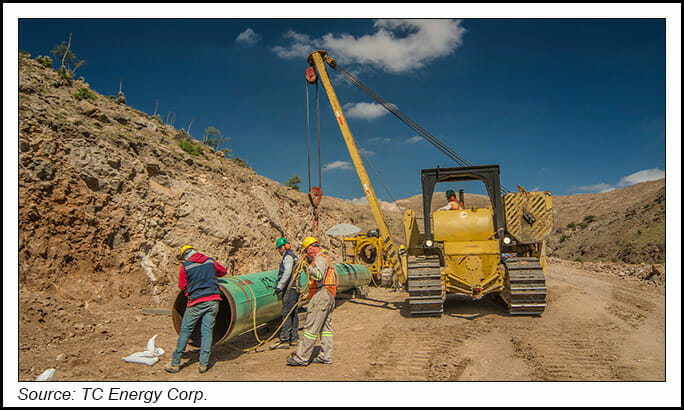 During TC’s May 7 conference call to discuss first quarter earnings, Chapman said the firm’s primary focus in Mexico is getting the Villa de Reyes pipeline built and in-service by the end of 2021, which is “consistent with our prior guidance. At the same point in time we’re still hopeful that along that same timeline we’ll have a revised right-of-way path to start construction again on the Tuxpan-Tula line and get that in service again two years or so after we start construction.”

Construction of the bidirectional, 886 MMcf/d Villa de Reyes pipeline “is ongoing but has been delayed due to Covid-19 contingency measures which have impeded our ability to obtain work authorizations as a result of administrative closures,” management said in the company’s 1Q2021 letter to shareholders.

Upon completion, the 261-mile Villa de Reyes pipeline is meant to connect with TC’s existing Tamazunchale and partially complete Tuxpan-Tula pipelines, and to supply gas to power plants and industrial facilities in central Mexico.

Construction of the central segment of Tuxpan-Tula, meanwhile, has been delayed due to lack of progress by Mexican energy ministry Sener on indigenous consultation.

Completion of the 178-mile pipeline is expected to take about two years from when the indigenous consultation concludes.

Beyond Villa de Reyes and Tula, Chapman said, “I think that there is a potential need for additional demand into the southeast portion of Mexico, into the Yucatán Peninsula, and we are somewhat uniquely situated to potentially serve that via an extension of our [Sur de Texas-Tuxpan] pipeline, as well as on the West Coast.”

“The potential for West Coast Mexican LNG exports [is] probably on a little bit longer timeline, however.”

Chapman said he sees the Mexico investment opportunity being defined by “fits and starts,” and “bite sizes,” adding, “another couple hundred million dollars a year over the next several years doesn’t seem out of line” for investment in the country.

“We continue to expect project costs to increase significantly along with a delay to project completion,” said management. It had warned in February of coronavirus-related delays.

“Coastal GasLink will continue to mitigate cost increases and schedule deferrals and is working with LNG Canada on establishing a revised project plan and budget. Incremental costs will be included in the final pipeline tolls.”

The Keystone loss eventually is expected to be reduced by nearly half when the Alberta government pays for its share of spending on the aborted 830,000 b/d project before construction stopped.

No next steps were revealed, but ways to recover Keystone losses in the United States remain under review.

While regretting the end of the 10-year-old oil export pipeline proposal, executives vowed to march in step in the future with evolving U.S. and Canadian climate change policies that contributed to the Keystone cancellation.

“We are exploring opportunities to electrify and use renewable energy to power certain of the company’s proprietary energy loads, with the goal of a net reduction in emissions across our footprint,” management stated.

“In all our operations and projects, we remain focused on managing, reducing or eliminating our greenhouse gas emissions to the fullest extent possible.”

With additional reporting by Gordon Jaremko