Global completions specialist Superior Energy Services Inc. began the year with a merger in the works and plans to expand offshore and international services. Then Covid-19 happened. 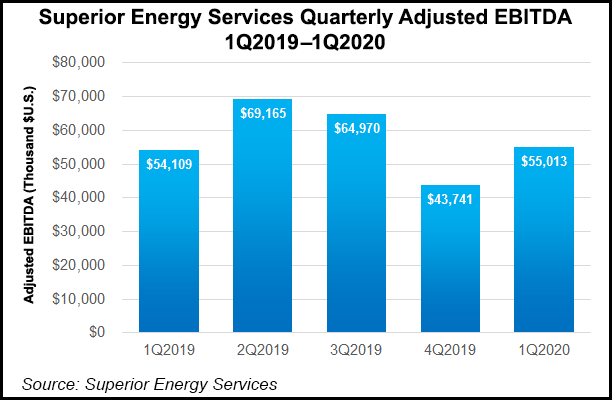 Significant progress had been made toward finalizing the merger, but the pandemic and dismal commodity pricing significantly disrupted those plans, CEO David Dunlap said Thursday as the company issued 1Q2020 results.

Market upheaval has led the near-partners to scratch the merger.

“This disruption has rendered the combination of our North America business lines with Forbes and our related note exchange offer impractical to complete on the terms originally contemplated, and we and Forbes intend to terminate the merger agreement,” Dunlap said.

The overall reasoning behind shoring up the less profitable service lines and expanding business overseas remains, however.

“While this specific transaction will not come to pass, the strategic rationale for the separation of the company’s business lines remains clear, and we will continue to actively pursue strategies to effectuate it,” Dunlap said.

Revamping the business structure still is top of mind, as Superior plans to separate into two publicly traded companies.

One company would consolidate the U.S. onshore completion, production and water solutions units, while the other would combine the global franchises, Dunlap said. No timeline was offered on when the dual companies would be created.

“Although our first quarter results don’t reflect an extensive impact from the Covid-19 pandemic, it’s clear that the world changed suddenly as the global spread of this illness accelerated toward the end of the quarter,” the CEO said.

“At Superior Energy, our time and effort increasingly shifted toward ensuring the well-being of our employees and customers as the uncertainty created by the spread of Covid-19 grew.” the pandemic led to a “precipitous decline in both oil demand and price. In turn, our customers have rapidly and dramatically reduced their spending, causing us to take significant steps to respond to a much smaller market.”

To date, Superior has undertaken actions to cope. Payroll costs have been slashed by an estimated $115 million net using salary reductions, layoffs and furloughs. The 2020 capital expenditures have been cut to $50 million for the year.

Drilling Products and Services segment revenue increased 3% year/year to $104 million. However, the Onshore Completion and Workover Services segment saw revenue decline by 41% to $61.2 million. Production Services revenue also fell from a year ago by 2% to $101.5 million, and Technical Solutions slumped by 5% to $54.8 million.