Appalachian shale gas is reshaping North America’s largest wholesale electricity market, PJM Interconnection, in an ongoing transformation that is likely to have serious ramifications for other power generators throughout the grid operator’s footprint, speakers said during a webinar hosted by NGIearlier this month. 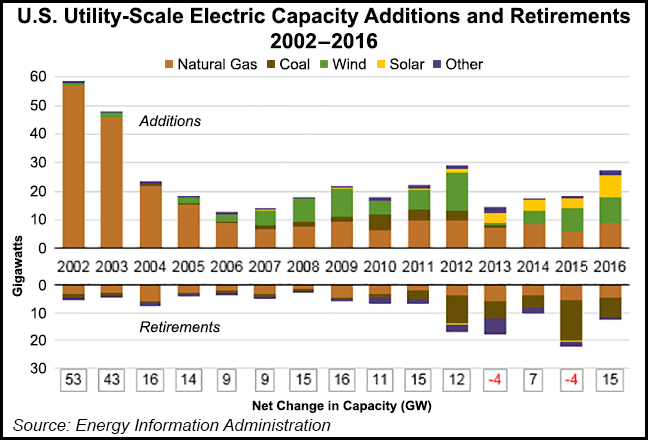 “I would have to agree with that,” said PJM’s Michael Bryson, vice president of operations, when asked if he believes a gas-fired power building boom is underway in the system. “You have new generators bidding into our capacity market, and we have a three year-ahead capacity market. Over the next three or four years, we’re going to see 5,000-10,000 MW of new gas build in PJM.”

PJM monitors and coordinates more than 1,300 electric generators in all or parts of 13 states and the District of Columbia — including shale-rich Pennsylvania, Ohio and West Virginia. The grid operator oversees a 243,417-square mile service territory in which 21% of the U.S. gross domestic product is produced. The trend in PJM underscores a broader shift across the country as natural gas and renewables continue to account for a growing share of the nation’s generation stack.

“These are some of the most efficient generation plants on the planet; they’re brand new,” Bryson said of the gas-fired facilities during NGI’s “Super Power” webinar (replay available), which included two other speakers invited to help the audience better understand the impact of Appalachian shale gas on the power markets. “They’re building right on top of the supply, and the supply is extremely inexpensive. The combination of those things makes the economics of that very compelling.

“If you look at the elephant in the room, it’s hard for any other source to compete without subsidies — maybe other than demand response — with natural gas.”

Just days after the webinar, Moody’s Investors Service released a report that found the gas-fired buildout is likely to “wreak havoc” on the PJM market, as the large influx of natural gas plants could pose “severe challenges” for generators operating in the region.

Across the country, demand for energy continues to plateau or drop. In PJM, peak demand has declined over the last 10 years. Moody’s estimates that new high efficiency gas plants coming online between 2016 and 2020 will result in a 25% increase in supply during on-peak hours, which it said will drive down market power prices and could lead to widespread closures of coal plants and pressure margins for all generators, including other gas-fired plants.

There are currently about 50 gas-fired power projects under way in PJM that include maintenance, expansions or newbuilds, according to the grid operator’s queue. One of the greatest pushes is underway in Ohio, Pennsylvania and West Virginia, where there are dozens of facilities under construction or planned. PJM has little say in the planning process; its job is merely to ensure there’s enough electricity for the 65 million people served in the region.

“We put out a requirement, then sort through each bid for the most economic proposals,” Bryson said of the company’s annual capacity auction, when asked if all the plants are likely to get built. “We don’t have any foresight of units that will retire. [Generators] have to give us 90 days notice. It’s really important that those resources clear. Investors and utilities continue to see that they’ll have units that will be competitive. They can withdraw that and buy out of the capacity market if they need to.”

Matt Hoza, a senior energy analyst at BTU Analytics LLC, noted that energy markets have a tendency to overshoot on the upside and the downside. He does not believe all the projects will be built. Many plants, he said, have been planned along interstate pipeline routes to secure inexpensive gas. “That’s cheap supply, but there are other considerations that need to be made,” he said. “Is there nearby [electricity] demand that needs to be met? If not, and you’re going to move power somewhere else, are there transmission constraints?”

Hoza added that some gas-fired power plants are likely to be more important for natural gas producers depending on the areas they’re built in. He pointed to the social opposition and regulatory hurdles facing long-haul pipelines in northeast Pennsylvania for example, and noted how deals like those signed by Cabot Oil & Gas Corp. with two gas-fired facilities under construction in the region could help demand.

“That additional regional demand can sort of substitute for new infrastructure growth, but both will really allow an operator to grow production,” Hoza said of pipelines and new gas plants. “If the Constitution Pipeline loses its final appeal and you have to scrap that project, signing agreements with new power plants can help you grow production.”

Power generation has accounted for more than one quarter of U.S. natural gas demand over the last decade or so — and even more in recent years. Last year, electricity generation from natural gas accounted for the largest share of total U.S. generation at 33.8%, surpassing coal’s share of 30.4%, according to the Energy Information Administration (EIA). As recently as 2005, coal and nuclear resources generated 91% of PJM’s electricity, but the mix has become more evenly balanced since then, with coal’s share cut to 33% and level with natural gas.

Hoza said BTU Analytics is forecasting 14 Bcf/d of incremental gas demand across the country from 2016-2020. While the firm expects power generation to play a role, it’s forecasted to account for a smaller share than other sources at about 2.5 Bcf/d. Even still, he said “the more gas that we need to feed more power plants means more gas is coming out of the ground,” which could help lift natural gas prices.

In the near-term, the nation’s future generation mix depends on gas prices, as new and existing gas-fired plants compete with coal. In the long term, however, gas is expected to compete more with wind and solar.

Driven by natural gas and renewables, the U.S. power grid added more than 27 GW of electricity generating capacity last year — the largest amount added since 2012, according to the EIA. While natural gas added 9 GW, wind added 8.7 GW and solar added a record 7.7 GW. BTU estimates that about 4 Bcf/d of demand has already been lost to growth in renewables and Hoza said “that’s only going to increase going forward.”

“Frankly, I don’t believe that there’s going to be a threat to gas-fired facilities anytime soon. They currently enjoy very favorable economics,” said Richard Drom, a leading Federal Energy Regulatory Commission attorney at law firm Eckert Seamans Cherin & Mellott, who focuses on gas and electricity issues. “On the other hand, with the state and local push for renewable portfolio standards, when you don’t have a competitor, it makes it hard to compete.”

Drom said “gradual and inevitable” changes have been forged by increasingly efficient and affordable renewable energy sources. He added that one of gas-fired power’s biggest challenges in the years ahead will be social opposition in the face of growing fears over climate change. Another could also be subsidies for coal and nuclear facilities, but he added that those measures have an “uncertain legal future” as they’re facing court challenges.

President Trump’s initiatives to roll back the Clean Power Plan and other policies that have hurt some fossil fuels more than others might not matter in the long-term either, Drom said.

“The Trump administration can try to prop up coal jobs and coal production, but increasingly, the economics are pushing natural gas to the front and renewables sometimes don’t have to compete because of the renewable portfolio standards. I don’t see coal coming back.”