During a week in which oil and stock markets disintegrated and the coronavirus reached pandemic status, natural gas forward prices rallied as traders attempted to assess the fallout, according to NGI’s Forward Look. 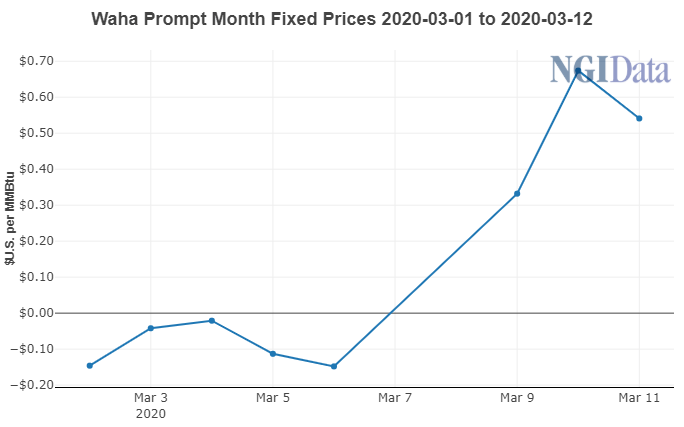 Although the surge proved to be short lived, markets across the country ended the March 5-11 period on considerably higher ground. The biggest beneficiaries from the run-up were pricing hubs in the Permian Basin, where any sustained price-directed pullback in oil drilling was seen leading to a sharp reduction in associated gas.

Volatility was on full display throughout the week, with large swings in both directions, as CME Group announced that it was closing the Chicago trading floor as a precaution against the spread of Covid-19, and stock market trading was ground to a halt for the second time in four days as prices collapsed.

Crude already had begun to decline sharply during the first week of March, but the carnage intensified last Monday when news circulated that the Organization of the Petroleum Exporting Countries (OPEC) and its allies failed to agree on a plan to reduce supply in the face of demand shocks. Instead, Saudi Arabia cut prices and Russia indicated it would increase production.

Oil markets went into freefall, with West Texas Intermediate (WTI) crude sinking as low as $27.34/bbl before recovering a bit later in the day. After initially following suit, natural gas prices roared back as traders mulled the implications of a far more bearish outlook for oil.

“Should the market see these prices for an extended period of time, it could ultimately prop up gas prices as associated gas production would likely decline,” Enverus analysts said in a note to clients.

After hitting an intraday low of $1.610, the April Nymex gas futures contract settled Monday at $1.778, up 7.0 cents from Friday’s close.

Gas prices continued to strengthen on Tuesday as short-covering gained momentum amid record speculator net-short positioning in natural gas. The prompt month closed the day nearly 16 cents higher, with gains of more than a dime seen through the rest of 2020.

Meanwhile, short-covering may hold the key to what happens next in the gas market, according to EBW Analytics Group. “If further margin calls lie ahead, forced buying of natural gas to cover outstanding short positions may become a self-fulfilling circle, pushing natural gas higher than is fundamentally warranted.”

Regardless, volatility may stick around for the near term as the broader financial markets continue to exhibit swings not seen in a decade, taking natural gas along for the ride, according to EBW. The firm said technical factors could play an exaggerated role during this time, a theory that was tested on Wednesday as the April Nymex futures contract came within a hair of $2.00, only to hit strong resistance and then tumble back to a $1.878 settlement.

Given the events that continue to unfold, the outcome for natural gas may be determined by macroeconomic events, EBW said. “If oil resumes its downward push, natural gas may react in a similarly bullish fashion as it did earlier this week and rise above $2.00/MMBtu. Or will bearish fundamentals reassert themselves?”

Over time, it is likely that bearish fundamentals will weigh on prices and send futures lower, especially as the potential market effects of the coronavirus may reduce demand more than supply in the near to medium term, according to EBW. With the storage surplus already set to surge more than 200 Bcf versus both year-ago and five-year average levels over the next month, “further demand destruction could severely weaken natural gas from a fundamental perspective,” the firm said.

The Energy Information Administration (EIA) on Thursday reported that inventories fell a paltry 48 Bcf for the week ending March 6. The draw fell below expectations, which ranged from minus 49 Bcf to minus 66 Bcf, and was dwarfed both by last year’s 164 Bcf pull for the similar week and the five-year average withdrawal of 99 Bcf.

By region, the Midwest withdrew 29 Bcf week/week, while the East pulled 25 Bcf. The Mountain region reported a 4 Bcf withdrawal, while the Pacific injected 3 Bcf. The South Central injected 7 Bcf during the period, including 6 Bcf into salt stocks and 1 Bcf into nonsalt, according to EIA.

Looking ahead, market observers continue to see storage inventories nearing the 2.0 Tcf mark by the end of March, and some early estimates are pointing to 4.0 Tcf stock levels ahead of next winter. On energy-focused social media chat room Enelyst, EBW analyst Eli Rubin said there are huge uncertainties depending on how quickly producers can respond to the lower oil price environment and slow production, and on how much liquefied natural gas (LNG) is exported.

“It will be tough to see how the European market balances this summer. They are vastly oversupplied, and there are physical storage constraints. It will be interesting to see how Russia reacts; this could have a big impact on our LNG exports and Nymex prices later this summer.”

The April Nymex gas futures contract went on to settle Thursday at $1.841 and then tacked on another couple cents to close out the week at $1.869. The May contract hit $1.901 by Friday.

While U.S. and global oil markets were crumbling, natural gas prices in West Texas were staging a comeback. Permian Basin pricing, which routinely has fallen into negative territory amid a glut of associated gas supply and a lack of takeaway capacity, has bounced back before. However, this week’s surge may have some staying power since several exploration and production (E&P) companies already have announced further cuts to spending and activity in response to the oil price collapse, with more producers likely to follow suit.

Permian Basin pure-play Diamondback Energy Inc. was the first to announce it would immediately cut completion crews to six from nine and drop two rigs in April, with another set to be released by the end of June. Occidental Petroleum Corp., Marathon Oil Corp., Parsley Energy Inc., Ring Energy Inc. and California Resources Corp. quickly followed with their own plans for navigating the new price environment.

By Wednesday, Permian pure-play Matador Resources Co. joined the fray, indicating it would halve its rig count to three by the end of June and pursue sales of some noncore assets. The E&P also is considering a joint venture or sale involving Permian Delaware mineral interests, and company executives are taking big pay cuts.

Most recently, Apache Corp., Devon Corp., Contango Oil & Gas Co., Ovintiv Inc., PDC Energy Inc. and Murphy Oil Corp. outlined their plans to navigate the downturn. Apache said it is dropping all of its Permian rigs in a move to limit its “exposure to short-cycle oil projects.” It also is slicing its dividend by 90%.

With crude production outlooks growing dimmer by the day, April gas prices at Waha experienced a nearly six-fold increase during the March 5-11 period, according to Forward Look. Waha’s April contract sat Wednesday at 54.1 cents, up 65 cents from last Thursday. Hefty gains were seen across the Waha forward curve, with each remaining month of 2020 surging least 50 cents during that time.

“In a little less than two weeks the Bal-2020 basis strip is up almost $1.00, and methane molecules in that region are once again fetching more than $1.00/MMBtu,” Mobius Risk Group said.

Although Genscape is anticipating the in-service of the Wahalajara system by the end of the month, “these movements seem to coincide with the sharp decline in the West Texas Intermediate (WTI) crude price,” Margolin said.

Nevertheless, Genscape expects the Wahalajara pipeline to begin service sometime this month, which would provide about 1 Bcf/d of new takeaway capacity out of the constrained Permian. “However, we do not see any signs yet that system has begun operations,” Margolin said.