A popular mantra in the world of energy is that there’s no better cure for low prices than low prices, and that slogan rang true for the May 18-22 period as cheap natural gas incentivized power burns across the Lower 48, driving up weekly spot gas prices. Despite a generally mild weather pattern over most areas, NGI’s Weekly Spot Gas National Avg. jumped 9.5 cents to $1.615. 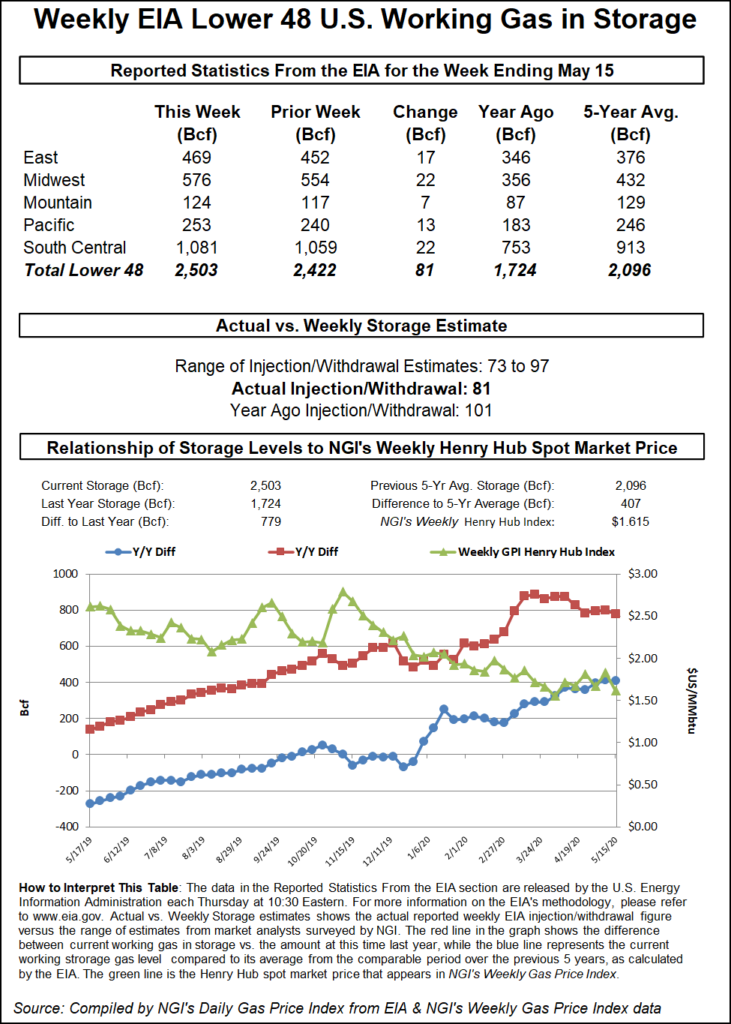 Although some of the most picture-perfect weather eventually settled in across the Northeast, markets there led the gains amid a chillier start to the week. Points along the Transcontinental Gas Pipe Line picked up around 15.0 cents on the week, while Algonquin Citygate rose 13.0 cents to average $1.410.

Prices across Appalachia and the Southeast posted similar week/week increases, with Dominion South edging up 17.0 cents to $1.385. Benchmark Henry Hub was up 11.5 cents on the week to $1.730.

Gains seen throughout the Midcontinent and Midwest held under a dime for the most part, while the reopening of Texas businesses amid the Covid-19 pandemic boosted demand and prices in the state. Houston Ship Channelrose 16.5 cents week/week to average $1.765, though intraweek prices surged to within a nickel of the $2 mark.

The news was firing on all cylinders this week, which led to plenty of volatility for natural gas futures, but ultimately ended with prices not too far removed from where they started the week.

Tuesday saw some follow-through in the futures market as production declines were also seen in the Haynesville Shale. Meanwhile, weather models also started to hint at a warmer long-range pattern that was seen as a precursor to a hotter-than-normal summer.

By midweek, however, futures started to retreat as Wednesday marked the deadline for July U.S. liquefied natural gas (LNG) cancellations.

“The tone of this week changed drastically from how it began,” said Bespoke Weather Services.

Shipbroker Poten & Partners indicated that 25 U.S. LNG cancellations are expected in July and more than 20 are expected in each month from August to October given the uneconomic spread between the United States and key markets overseas. And with “a little bit of excess supply” seen in the firm’s supply/balances, the firm sees additional cancellations possible.

Adding to the glut, EBW Analytics Group said that Dominion Energy Inc. recently indicated that exports would continue from its Cove Point terminal in Maryland, where news had circulated about a possible maintenance outage. Such an outage would have been “an ideal opportunity to halt exports and help work off an enormous global supply glut,” according to EBW.

“Buyers have canceled 30 U.S. LNG cargoes for June, but most of those shipments were linked to Gulf Coast facilities, where gas prices are determined by Henry Hub. Cove Point sources its gas from relatively cheaper Northeastern markets, providing more substantial netbacks.”

Feed gas volumes being delivered to U.S. terminals already have fallen far from highs set earlier this year. After soaring above 9 Bcf/d in March, deliveries sat Friday at just around 5.5 Bcf/d.

Meanwhile, the latest government storage report was seen as fairly insignificant despite coming in shy of consensus, and prices continued to fall after the data was released on Thursday. The Energy Information Administration (EIA) said that 81 Bcf was injected into storage for the week ending May 15, elevating stocks to nearly 800 Bcf above year-ago levels and about 400 Bcf above the five-year average.

On Friday, futures traders took a breather with little change in the background state. The June Nymex contract settled the day at $1.731, up 2.1 cents from Thursday’s close but off 5.2 cents from Monday.

With so many unknown factors moving forward, and the question of whether storage completely fills likely being unanswered for quite awhile, it is conceivable to think this general price range continues for futures, according to Bespoke.

“If the new round of economic re-openings adds more demand back, we may move higher in the nearer term, but upside risk will have limitations until we can clearly say risk of containment is lowering,” the firm said. “Summer weather should help, although not yet, as the pattern looks tame into the start of June before warming toward mid-month.”