American Midstream Partners LP has raised the ire of both of Louisiana’s U.S. Senators and Atmos Energy Corp. over its plans to decommission its 88-year-old Midla pipeline system, and state lawmakers have passed a bill that could force the pipeline to remain open. 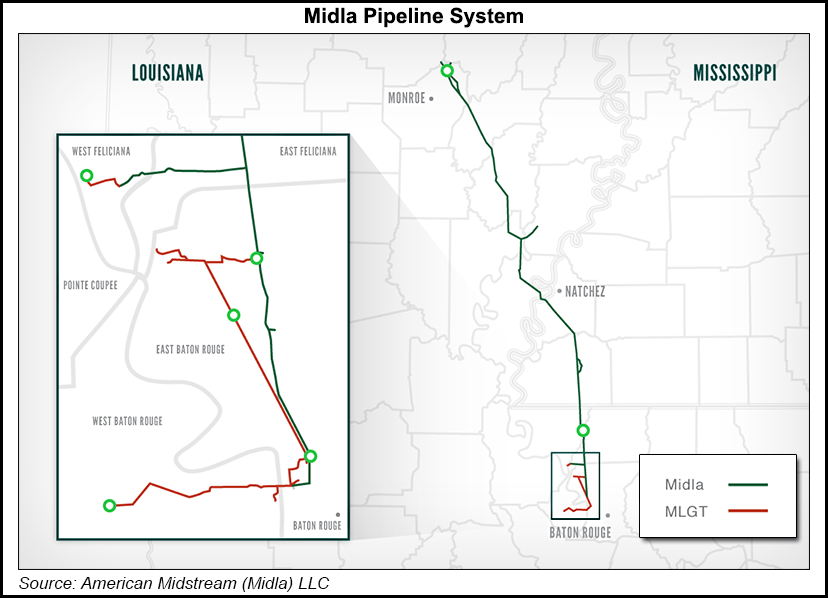 Last month, Denver-based American Midstream announced plans to abandon the Midla system after negotiations with customers over repairs to the pipeline broke down and the company didn’t receive any interest to an open season (see Daily GPI, March 13). On March 28, the company filed an application (No. CP14-125-000) with FERC to abandon the pipeline.

“The reliability and safety of the Midla mainlines cannot be assured,” Dennis Kelly, senior counsel for American Midstream, wrote in the Federal Energy Regulatory Commission (FERC) application. “While [our] diligence operating and maintaining the Midla mainlines has kept the pipelines running decades after their predicted useful life, age and long-obsolete construction methods have left the Midla mainlines suffering from chronic leakage throughout their length.”

According to documents filed by American Midstream, the 370-mile Midla pipeline system was built in 1926, traverses Louisiana and Mississippi, and was designed to move gas from the then-prolific Monroe Gas Field in Ouachita Parish, LA, to a Standard Oil (now ExxonMobil Corp.) refinery in Baton Rouge, LA. In the early to mid-1970s, the system carried up to 300,000 Mcf/d. The mainline contains 16- to 22-inch diameter pipe.

According to Kelly, American Midstream has concluded that continued repairs to the Midla system are not viable and that the pipeline needs “to be shut down in an orderly, yet expeditious manner,” and that former customers would “need to be served either by a replacement pipeline or some other fuel or method of natural gas delivery.” Negotiations with customers began in May 2013, but were fruitless.

But on April 4, Atmos filed a motion with FERC stating its protest and opposition to American Midstream’s plans and urged regulators to intervene. Atmos was also incensed by the timelines submitted by American Midstream.

“The deadlines [American Midstream] proposes for FERC consideration are so tight that they fundamentally compromise the due process rights of the affected parties,” wrote James Jeffries IV and Melinda Vervais, attorneys representing Atmos. “For instance, [American Midstream] proposes that parties must intervene…within 10 days of the posting of a notice of the abandonment application by FERC, rather than the standard 60-day period authorized for intervention in abandonment proceedings.

“Under this approach, any interested party that misses the 10-day deadline for intervention will lose standing in this proceeding, as well as its right to rehearing by FERC and judicial review of the abandonment in the U.S. Court of Appeals.”

“To make matters worse, [American Midstream’s] application proposes a highly compressed process for FERC consideration of this complex and important matter,” Landrieu, who chairs the Senate Committee on Energy and Natural Resources, wrote on April 1. “While I appreciate the urgency to move forward quickly in light of the safety issues Midla raises, running roughshod over the existing Midla customers will only increase the level of conflict and thus the length of time it will take to come up with a solution.”

Landrieu took issue with American Midstream’s proposal that parties interested in intervening in the case must do so within 10 days of FERC a posting of a notice on the matter. She added that although FERC rules provide a 60-day period for intervention in abandonment proceedings — and said it “would not be unreasonable” to request the full 60 days — “in the interest of moving things forward I respectfully request that the commission allow for not less than 30 days for interested parties to intervene.”

LaFleur was also urged by Landrieu to deny American Midstream’s request that FERC make a decision on their application to abandon Midla by July 1. “That is an arbitrary deadline that very well may not give the commission and others the time they need to give appropriate consideration to the Midla proposal,” she said.

U.S. Sen. David Vitter (R-LA) also blasted American Midstream’s plans. On Feb. 20, he urged FERC to launch an investigation into whether the company was planning to overcharge customers with a new rate structure, or was threatening to withdraw gas service.

The Louisiana State Senate inserted itself into the fray on April 2, after it passed a bill, SB 525, by a vote of 38-0. The bill stipulates that on or after March 10, if FERC approves a proposal to abandon an interstate natural gas pipeline, the portion within Louisiana will be considered an intrastate natural gas pipeline subject to the jurisdiction of the state Public Service Commission.

“This kind of action is unheard of in the pipeline industry,” Sen. Robert Adley (R-Benton), one of SB 525’s sponsors, said in a statement. “It is true that Midla was built decades ago, but so was just about every other natural gas pipeline in Louisiana.

“It is also true that customers in Louisiana have paid high rates for years. Midla took the money and did nothing to modernize the pipeline as required by pipeline tariffs…If there is some event on this pipeline, it is on the shoulders of the people who just bought the pipeline, ArcLight Capital [Partners]. This is about greed, plain and simple.” ArcLight bought the line in April 2013 from AIM Midstream Holdings, LLC, an affiliate of American Infrastructure MLP Funds, LP.

SB 525 was introduced in the state House of Representatives on April 3. The chamber will adjourn no later than June 2.