A Gulf Coast natural gas storage operator’s application to abandon capacity solely due to weak market conditions is contrary to the public interest, would set a dangerous precedent if granted, and is not supported by FERC policy, the Commission was told in a Tuesday filing. 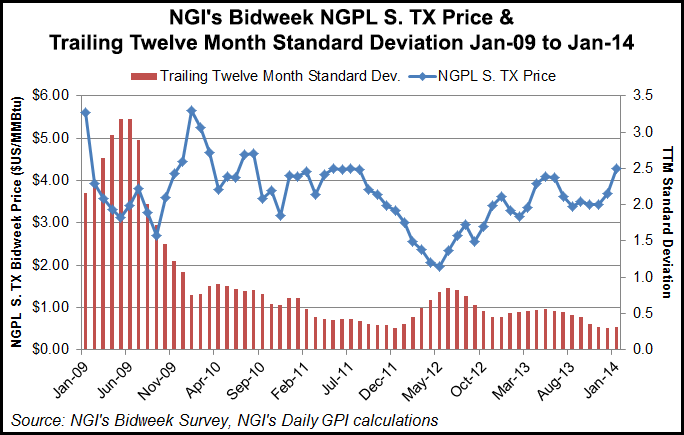 Last month, Tres Palacios Gas Storage LLC (TPGS) filed at the Federal Energy Regulatory Commission (FERC) to abandon up to 22.9 Bcf of working capacity at its three-cavern facility in Texas because “…demand for and the prices being paid for natural gas storage services in the Gulf Coast region have declined substantially, particularly over the past year” (see Daily GPI, Dec. 10, 2010).

Such an abandonment would allow TPGS to reduce payments for storage capacity it leases from Riverway Storage Holdings LLC and affiliates. But Riverway told FERC what TPGS is seeking is really not an abandonment at all because the storage operator would have the ability to file to reclaim the abandoned capacity in the future.

TPGS is attempting to duck the market risk of its project that it previously assumed and excuse itself from payments to Riverway by way of the abandonment, according to the filing [CP14-27].

“…TPGS is not abandoning any physical facilities at the project. Rather, the ‘abandonment’ is merely a paper restatement of the working gas capacity and a commitment to use not more than the restated working gas capacity of the project,” Riverway said. If the abandonment were granted, according to Riverway, TPGS believes it would gain leverage in contracts that are not subject to Commission jurisdiction.

When the project was certificated by FERC for market-based rates in 2007, TPGS assumed “‘…the economic risks associated with the costs of the project’s facilities to the extent that any capacity is unsubscribed,'” said the Commission’s order as quoted by Riverway.

“Part of the reason the economics at Tres Palacios and other storage facilities across the U.S. have gone south is the decline in price volatility,” said Patrick Rau, NGI director of strategy and research. “A reduction in volatility not only lowers the need to hedge, everything else being equal, but also makes it more difficult to arbitrage any spreads between current spot market prices and the forward curve.”

Late last year, John Hopper, CEO of gas storage developer Peregrine Midstream Partners told NGI that a sustained period of cold temperatures could cause market players to rethink the value they place on storage capacity (see Daily GPI, Dec. 2, 2013). It remains to be seen whether the latest round of harsh winter weather was enough to do the trick.

According to Riverway, FERC’s Certification Policy Statement says that the Commission will protect the interests of parties such as Riverway “…while project operators such as TPGS must assume the risk that their project does not turn out to be economic…TPGS is now seeking relief because it wants to make more money than the market appears willing to pay.”

Further, in its filing TPGS did not provide “any hard data” about its contracts and costs, Riverway said, and the operator’s characterization of the market for Gulf Coast storage capacity is overly pessimistic as well.

Riverway cited Energy Information Administration (EIA) data from early October that said 162 Bcf of new gas storage capacity was operational, under construction or planned for the Producing Region (including Texas, home of the TPGS project). The same EIA report identified another 37 Bcf of new working capacity in Mississippi and Louisiana, Riverway said.

“In other words, there is sufficient demand for storage capacity in the Producing Region that the market is sending a signal to add capacity,” Riverway told FERC.

TPGS is the only entity in the region that is seeking to reduce storage capacity, Riverway said, and the amount of the reduction — up to 22.9 Bcf of working capacity — is larger than “many” other storage fields. “Thus, the artificial reduction in storage capacity proposed by TPGS could have a significant effect on the market with a corresponding distortion of the price of storage.”

If TPGS were allowed to abandon the full 22.9 Bcf, it would leave the facility with at least 15.5 Bcf of working capacity across three caverns, according to a TPGS statement cited by Anadarko Energy Services Co., which has filed to intervene in the proceeding.

According to Riverway, if the TPGS abandonment were granted, it would sever the historical link between a facility’s certificated capacity and its physical capability. “It is common in the storage industry to base lease, royalty, and other payments on the certificated storage capability of a project…TPGS’s application would…substitute an operator’s preferred number, versus the technical capacity, for the project capacity.”

A storage operator, in effect, would have the ability to withhold capacity from the market when rates are not favorable, Riverway said, all the while retaining market-based rate authority. “Thus, they not only can take advantage of the prices that flow from a manipulated supply, operators are incented to manipulate supply for price benefits with the protection that government regulators approved the manipulation of supply.”

Riverway asked FERC to deny the TPGS application or set it for a hearing that would investigate the regional gas storage market; determine the market impact of withholding storage capacity.

“The contract fee may be reduced only if the working gas capacity is required to be reduced by order of either FERC or the Texas Railroad Commission,” USM told FERC. “Through these provisions, Tres Palacios and USM allocated both the risk of changed market conditions and changed physical or geological conditions. As to changed market conditions the sublease clearly provides that underutilization of the caverns is not a basis for reducing the contract fee.”

USM said the TPGS filing followed a failed attempt by the storage operator during the third quarter to renegotiate the payment terms of its sublease.

“Tres Palacios’s theory is that if the Commission grants the abandonment, its certificated capacity will change and its annual contract fee to USM will be reduced by millions of dollars,” according to USM, which said such an abandonment can only be granted due to a physical change in capacity or legal change in ownership of the capacity.

Crestwood Midstream Partners LP, which owns Tres Palacios, said it “is reviewing the filings that have been made and will respond where needed to ensure the Commission has an accurate record on which to act.”