Nearly a year after it shut in its largest field in the Appalachian Basin, Stone Energy Corp. has signed an interim gathering and processing agreement with Williams to begin steadily ramping up its gas flows and end the curtailments by August, Stone said Wednesday. 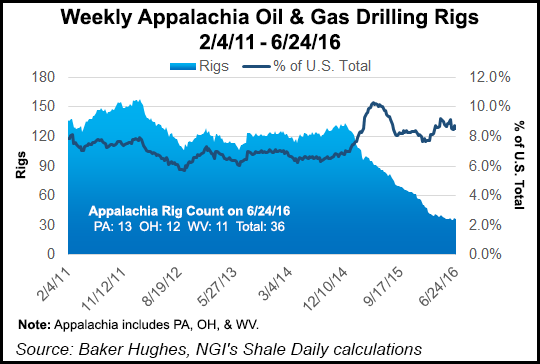 Stone had turned away from Appalachia last year in favor of the offshore Gulf of Mexico, announcing last September that it would shut in about 100 MMcfe/d of production from the Mary Field in West Virginia, where it holds 39,200 acres (see Shale Daily, Sept. 25, 2015). The agreement with Williams has allowed it to resume production there. Volumes are currently at 45 MMcfe/d and are expected to reach more than 100 MMcfe/d in August.

Those come in addition to the 20 MMcfe/d that’s already flowing from Stone’s Heather and Buddy fields in the state. The deal also allows Williams to boost its gathered volumes in the region. Stone sorely needed that production back. Its borrowing base has been cut; its capital budget has been slashed, and it has warned of default and hired an adviser to explore strategic alternatives (see Shale Daily, April 18).

The new midstream deal was announced at the same time Stone said it would terminate its long-term deep water rig contract with Ensco plc that was valued at $20 million. The ENSCO 8503, which had been farmed out to a third party earlier this year, carried a dayrate of $341,000 and wasn’t scheduled to expire until August 2017.

“The termination of the Ensco contract eliminates a long-term obligation, which provides Stone with additional financial flexibility,” said Stone CEO David Welch. “The interim contract with Williams allows us to resume profitable production and positive cash flow at our Mary Field in West Virginia.”

At the time it shut in those volumes, Stone said stagnant oil and natural prices further reduced by negative basis differentials and fees for transportation, processing and gathering had reduced its operating margins in the basin.

Stone’s decision to restart production in West Virginia came a day after Eclipse Resources Corp. said it would revive its idled drilling program, increase its capital budget, begin working down its inventory of drilled but uncompleted wells (DUC) and end price-related curtailments in Ohio’s Utica Shale this year (see Shale Daily, June 29). Southwestern Energy Co. also said in recent days that any leftover proceeds from a stock offering would be used to work off its DUCs and finance other projects. It’s a sign that Appalachian exploration and production companies are keeping a close eye on firming natural gas prices.