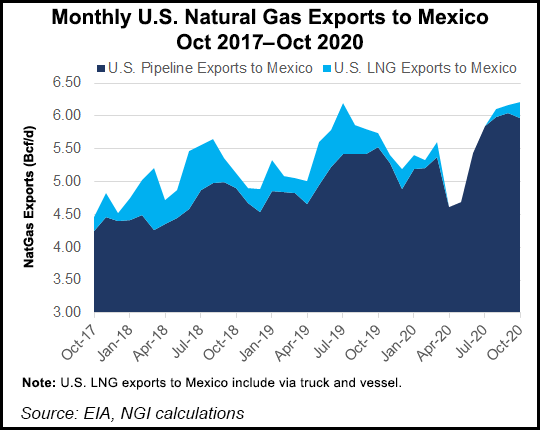 CEO José García Sanleandro of Gas Natural México (Naturgy Mexico), the local subsidiary of Spain’s Naturgy Energy Group, said the level of residential users has hardly budged over the last year and only reaches 7% of the population.

“This is one of our challenges, and opportunities,” he said.

He cited Monterrey as a success story, with 5,000 companies connected to the natural gas network, almost 8 GW of installed natural gas capacity and 90% residential coverage.

“The poorest states in the country are those that don’t have natural gas, and this is behind the government’s push to get gas to states in the south and southeast. Natural gas is a catalyst for economic and social development,” he said.

The Mexico CEO of Spain’s Iberdrola, Enrique Alba, echoed this sentiment, and said his company had contributed 30,000 jobs to Mexico in the past five years. “We don’t make policy, we respond to governments, and in function of what they want, we try to help them.”

Rogelio Montemayor, president of the Energy Cluster of Coahuila, lamented that the recent “euphoria” around shale gas in northern Mexico has been snubbed by the current administration’s position against hydraulic fracturing (fracking), meaning Mexico’s dependence on natural gas imports from the United States is growing.

“In the middle of the last decade, there was a euphoria about shale gas. We had a project going to prepare professionals in Coahuila for this. But it’s been canceled,” he said. “We can’t explore because the government said no to fracking, but what the states in the northeast can do is try to demonstrate that the risks are minimal, or no bigger than other economic activities.”

According to Mexico’s Comisión Nacional de Hidrocarburos (CNH), the country has 224 Tcf of prospective resources, a majority of which is unconventional. But Mexico imports between 70 and 80% of its natural gas needs, with domestic production stagnating.

Mexico’s total natural gas production was 3.8 Bcf/d in November, down from 3.95 Bcf/d in the similar 2019 month, CNH data show.

Private sector operators supplied 210.2 MMcf/d of the total, down from 228 MMcf/d in the year-ago month. State firm Petroleos Mexicanos (Pemex) produced 3.6 Bcf/d, down from 3.7 Bcf/d.

“High levels of production” from the Eagle Ford Shale in South Texas “could indicate similar production levels in the northern Burgos Basin region,” the U.S. Energy Information Administration said in 2017.

Mexico’s Jaguar Exploración y Producción CEO Warren Levy has said natural gas in the Burgos was a promising investment opportunity in Mexico, even given current demand and regulatory uncertainty. Jaguar has acreage in the basin. Levy said new Burgos approvals by CNH “will allow Jaguar to continue moving forward with our exploration and development plans.”