A plan purportedly under consideration by the Trump administration to replace tariffs on steel imported from Canada and Mexico with a quota system would “cripple expansion of U.S. oil and natural gas production because of supply restrictions,” according to the Texas Independent Producers and Royalty Owners (TIPRO). 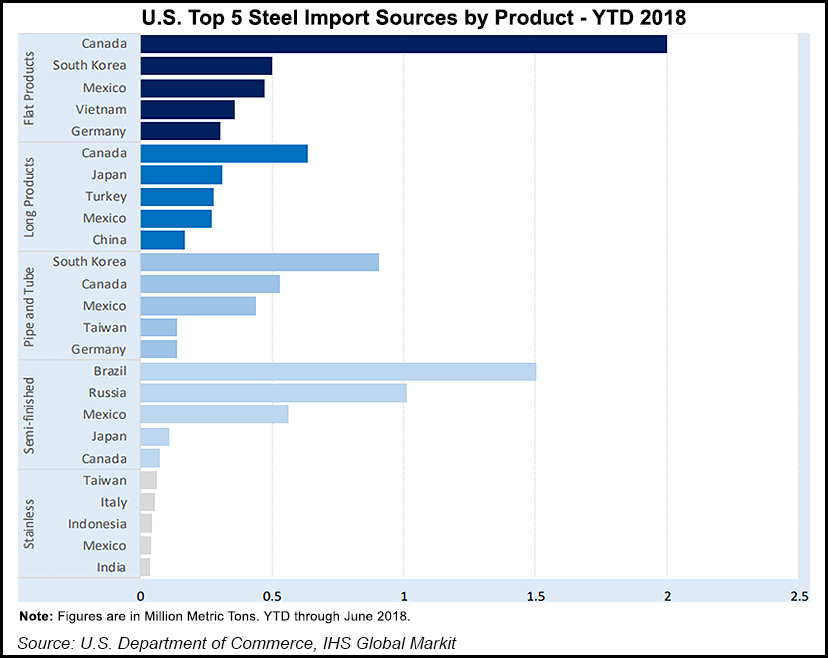 Days before the United States-Mexico-Canada Agreement (USMCA) is to be signed in Buenos Aires by representatives of the three countries, TIPRO President Ed Longanecker warned the consequences from import quotas, should they be enacted, “could be far worse” if steel and aluminum products are unavailable.

“Of particular concern to independent oil and natural gas producers is the reality that quotas also have a disproportionate impact on small businesses, who are unable to purchase this material in bulk to meet their supply needs,” Longanecker wrote in blog post earlier this month.

Longanecker said the import quotas were reportedly under consideration by the office of U.S. Trade Representative (USTR) Robert Lighthizer, but did not elaborate. He added the quotas were reportedly permissible under Section 232 of the Trade Expansion Act of 1962, which the White House has used to justify the tariffs on national security grounds.

“Texas, and the U.S. economy as a whole, has much to lose if the USTR moves forward with implementing quotas on steel imports,” Longanecker said. “Under any scenario, quotas will result in a reduction in workforce, threatening historic statewide unemployment lows fueled by the Texas oil and gas industry.

“Slowing down drilling while companies wait on steel product availability will ultimately decrease overall production as well as severance tax revenues that benefit the public.”

TIPRO wants Lighthizer and the Commerce Department, at a minimum, to exempt steel products for the energy sector from the proposed import quotas. Commerce outlined a procedure for the sector to request such exemptions last March, but the American Petroleum Institute voiced frustration over the process months later.

“Such an approach would maintain Texas’ contribution to making America energy dominant on a global basis and would preserve access to steel products for small and large oil and natural gas producers alike,” Longanecker said.

The White House in June slapped a 25% tariff on steel and a 10% tariff on aluminum imported from Canada and Mexico. At the time, Commerce Secretary Wilbur Ross said the decision to impose the tariffs on Canada and Mexico was made because of insufficient progress in renegotiating the North American Free Trade Agreement (NAFTA).

After months of negotiations, the United States and Mexico agreed to the USMCA in August. Canada agreed to join the trade pact on Sept. 30. The three countries pushed to sign the agreement before Mexico’s outgoing President Enrique PeÃ±a Nieto leaves office this week. President-Elect AndrÃ©s Manuel LÃ³pez Obrador takes office on Saturday.

While President Trump hopes to replace the 24-year-old NAFTA with the USMCA, analysts said the trilateral trade agreement faces an uncertain future in the current lame duck Congress.