The Ohio Department of Job and Family Services (ODJFS), in its latest report that tracks economic trends in the state’s oil and gas industry, found that employment in core shale-related fields, such as pipeline construction and well drilling, increased by nearly 80% from 3Q2011 to 3Q2013. 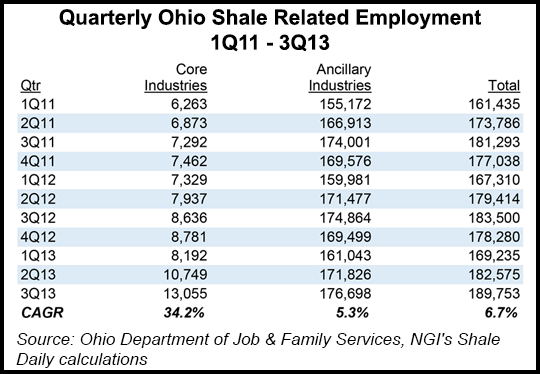 ODJFS, Ohio’s chief agency for labor market statistics, first issued the report in 2012, using 2011 as its base year to track growth in the state’s oil and gas industry as unconventional development in the Utica Shale began to increase. Ohio issued its first horizontal Utica shale permit in September 2010, according to state records. Since then, 1,230 horizontal permits have been issued and 838 wells have been drilled.

The latest report, which tracked industry changes from 3Q2011 to 3Q2013, found that 5,763 core shale-related jobs were added during the period. Ancillary shale-related employment, such as freight trucking and environmental consulting, increased by 1.5% when 2,697 jobs were added over the period. By the third quarter of last year, ODJFS said there were 13,055 core shale-related jobs in the state and 176,698 ancillary jobs, also up from the 10,740 and 171,826 jobs respectively recorded for 2Q2013.

The ODJFS report is delayed because the agency primarily compiles its data using the U.S. Bureau of Labor Statistics’ Quarterly Census of Employment and Wages, which is derived from the quarterly tax reports of employers in the state. It also calls on other statewide labor market information.

The report does not set out to quantify the oil and gas industry’s overall effect on the state’s labor market. In January, researchers at Cleveland State University said the economic impact of Utica Shale development has only been marginal to date and offset by job losses in other Ohio industries (see Shale Daily, Jan. 10). Another report from a multi-state research collaborative released in November 2013 said the Utica’s economic impact has been grossly overstated (see Shale Daily, Nov. 22, 2013).

Still, ODJFS did say it expects the oil and gas industry to continue propping up the state’s economy. While the average wage across all industries in the state was $44,658, the agency said in its latest report that the average wage in core shale-related industries was well above that at $71,661. The average wage paid to those working in ancillary fields was $59,998. Petroleum engineers and engineering managers saw the most money in the state’s oil and gas industry, each earning more than $100,000 annually.

There were also 127 core shale-related business establishments added during the study period. Ancillary shale related establishments, declined by 0.9% to 118 over the same time, though, and fell in line with a broader decline in new businesses opening across the state.