Oil and gas regulators in some of the biggest producing states are seeking to ease the pain of a historic collapse in oil demand as operators struggle to stay afloat amid plummeting prices and disappearing storage capacity. 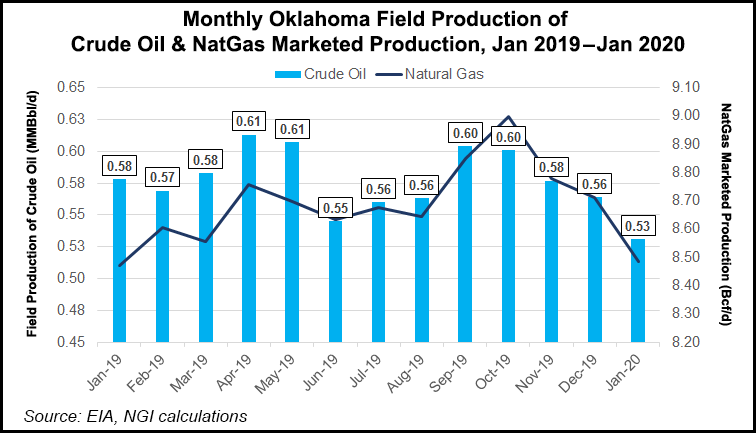 Longer-term relief is on the way through a statutory rule change process, she noted.

“It is in the best interest of the vital public institutions we serve that the State Land Office allow the temporary oil well shut-ins to assure we get the best value for the resources that they rely on in order to operate,” Garcia Richard said, adding that operators and environmental groups alike had expressed support for the relief efforts during a public online meeting.

“From the feedback given at that meeting, we’ve also decided to move forward with a rule change that will allow longer-term shut-ins. In that process, we will require that operators who are approved to shut-in wells be bound to comply with future bonding increases.”

The order was requested by Tulsa-based exploration and production (E&P) operator LPD Energy Co. LLC, which is owned by attorney Lee Levinson.

The OCC accepted Levinson’s assertion that oil production in Oklahoma at current prices may constitute “economic waste,” and ordered that E&Ps be allowed to shut-in or curtail output at their own discretion from wells that are uneconomic at current prices.

In the application, Levinson said the action by the OCC was warranted “based upon the current volatility of low oil prices along with the intervening circumstances of the Covid-19 pandemic.”

“While overproduction by Saudi Arabia and Russia has played a role in the collapse in oil prices, the far bigger factor is a drop in oil demand that only weeks ago would have been thought impossible,” Murphy said Wednesday. “There was no way for Oklahoma and other U.S. producers to anticipate and plan for up to 30 million b/d of consumption to disappear within just a few weeks.”

The commission’s action “gives those operators the freedom and flexibility they need to respond to market forces and decide what actions to take to survive.”

“It goes without saying, there’s a tremendous oversupply of oil right now in the world,” Levinson told NGI’s Shale Daily. The problem, he said, with extended-term leases in Oklahoma and elsewhere in the United States is “if you just voluntarily shut-in your wells, you could lose your leases.”

The OCC order benefits working interest and royalty owners alike by allowing oil to stay in the ground until prices recover, Levinson said.

“A substantial number of operators in Oklahoma are going to shut-in their wells because you can’t sell oil at $10, $15, $20/bbl or less,” said Levinson, who added that small and large operators alike supported LPD’s application.

The OCC is scheduled on May 11 to discuss mandatory production cuts, for which the Oklahoma Energy Producers Alliance (OEPA) has advocated.

However, in the wake of Wednesday’s favorable ruling, curtailment likely won’t be necessary, said Levinson. He is on the board of OEPA, but did not represent the group in its request for curtailment.

OEPA president David Little told NGI that Wednesday’s OCC order “will allow producers to shut-in their wells and hopefully keep their leases from becoming invalid.” However, “It does not prevent economic waste, which is occurring today,” he said.

As for the upcoming hearing on curtailment, Little said that OEPA is asking the commission “to use the tools they have at their disposal to prevent economic waste. We are hopeful.”

The three-member Railroad Commission of Texas (RRC), meanwhile, has tabled a similar proposal until next month, with Commissioner Ryan Sitton in favor of immediate action on curtailment and Chairman Wayne Christian and Commissioner Christi Craddick opting for delay.

“We would not necessarily interpret this 2-1 division as a proxy for a final decision, however,” analysts at Clearview Energy Partners LLC, said. “For example, Chairman Christian indicated that he had initiated talks aimed at coordination with his counterparts in North Dakota, Oklahoma and Canada. Moreover, we believe he could potentially waver amid continued crude oil price weakness…”

On potential curtailment in Texas, Levinson said, “I think there will be enough voluntary cutbacks if they do something similar to what we did that that won’t be necessary either because people can’t afford to give away this commodity.”

The North Dakota Industrial Commission also held an emergency meeting Tuesday to discuss regulatory relief for oil and gas companies, but deferred any official action to a later date.