Natural gas forward markets rebounded sharply for the trading period ending Aug. 4 as widespread sweltering heat set to return sounded the alarm once again that U.S. storage inventories are on pace to fall uncomfortably short ahead of winter. 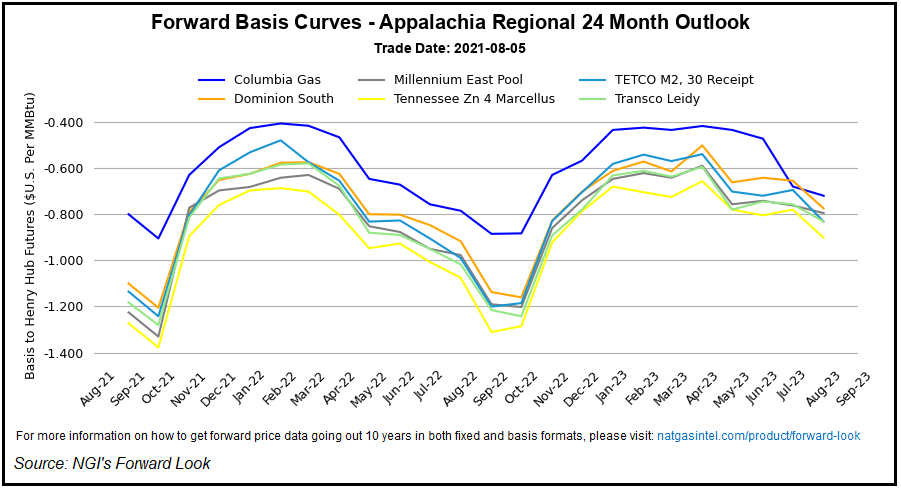 East Coast markets put up much heftier gains as the typical response by exploration and production (E&P) companies to higher prices appears to not be in the cards this time around. More than halfway through second quarter 2021 earnings results, most public E&Ps are remaining disciplined, shunning higher output and instead shoring up balance sheets.

“A whole number of factors…have come together to cause gas prices to be strong,” Looney said. “Whether they remain strong or not remains to be seen.”

Meanwhile, EQT Corp., the largest natural gas producer in the United States, plans to run a maintenance program on the Marcellus Shale assets it recently acquired from Alta Resources Development LLC. Production is increasing because of the tie-up, but management indicated it won’t chase short-term gains because of the recent, stronger price signals.

As such, much stronger pricing is being reflected for the production that is expected to be online when winter comes around. Eastern Gas South September prices rocketed 69.0 cents higher from July 29-Aug. 4, averaging $3.160, according to Forward Look. Similarly strong gains were seen for the balance of summer (September-October), while the winter strip jumped 23.0 cents to $3.640. Summer 2022 prices were up 14.0 cents to $2.460.

Meanwhile, the EBW team pointed out that any hopes for production to jump once the Whistler Pipeline began operations have been dashed. Project sponsor MPLX LP announced Monday (Aug. 2) that the 2.0 Bcf/d Permian Basin pipeline has been in service since July 1, suggesting concerns for a large production gain with Whistler’s commencement were misplaced. Instead, while the first-of-month pipeline nominations often decline, early August supply appears particularly weak.

“If production declines during August — as is eminently plausible — apparent shortfalls in the forward storage trajectory may become glaringly apparent and drive natural gas to new highs,” EBW analysts said.

Drilling analytics firm Enverus on Thursday provided some insight into current drilling activity levels. The company said Appalachia and the Permian both tied for the biggest week/week drop in the rig count, losing four rigs each in the week ending Aug. 4. In Appalachia, five companies each dropped their only rig in the region, while only one added a rig. Ascent Resources Utica Holdings LLC and Southwestern Energy Co. continue to lead the region with four rigs each.

LNG Exports On The Table?

Meanwhile, EBW said there are added risks ahead as LNG feed gas demand is set to ramp higher in the coming months. The sixth production unit at the Sabine Pass LNG facility and Venture Global Inc.’s Calcasieu Pass LNG facility are expected to come online next year. Cheniere Inc. on Thursday said construction of Sabine Pass Train 6 is 90% complete, and early commissioning activities have begun with the first fuel gas introduced in July. Bloomberg in the spring reported that Calcasieu Pass was offering cargoes for loading between October and December 2022.

How this added structural demand impacts supply is already causing concern in the market. On Thursday, after the EIA released its weekly storage data, participants on The Desk’s online energy chat Enelyst said the seasonal records that gas prices are setting overseas would mean U.S. prices would have to take another step higher if storage levels don’t improve.

The EIA said inventories for the week ending July 30 rose by only 13 Bcf, or 1 Bcf shy of the lowest estimate ahead of the report. The EIA recorded a 32 Bcf injection in the same period last year, and the five-year average is 30 Bcf.

One Enelyst participant said he didn’t think 3.4 Tcf was “the new norm” and expects the market to take “another leg higher” if storage does wind up at that level at the end of October. However, he was unsure of what the price might be. “Given European prices, it’s a random number at this point. It could be $5.00 or $6.00. What’s the difference?”

BofA Global Research analysts said it’s still too early to count out an E&P response to the higher price environment. However, if the current fundamental trends persist this fall, with minimal coal switching and stagnating production, the gas market may need to seek out other levers to help balance.

“Pricing out LNG exports is a possible next step, but the U.S. would have to compete with the global gas markets, requiring a drastically higher domestic price,” said the BofA analysts, led by commodity strategist Warren Russell.

Given rampant export demand, and near triple-digit temperatures across the South Central region, local inventories declined at both salt and nonsalt facilities. The EIA said salt stocks fell by 19 Bcf, and nonsalt dropped by 3 Bcf.

Another Enelyst participant noted that the 19 Bcf withdrawal in the South Central salt inventories was the largest third quarter salt draw of all time.

“All in all, the backdrop remains quite supportive, given where current levels of supply sit,” Bespoke said.